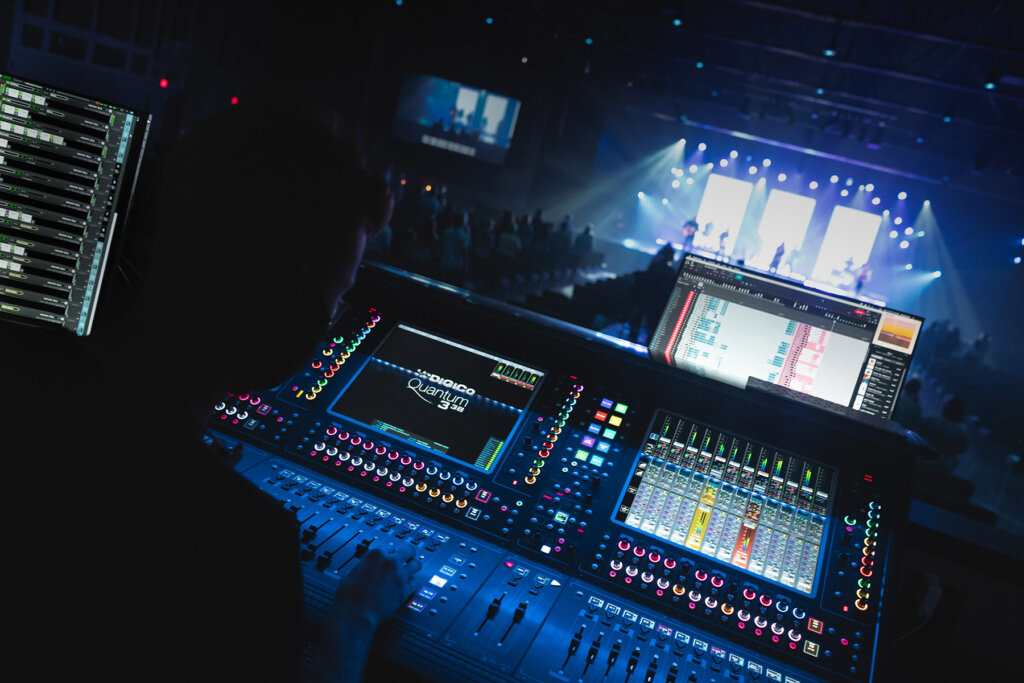 While Mt. Horeb United Methodist Church regards itself as philosophically conservative, its embrace of worship technology has been anything but. The church, whose name refers to the mountain that Moses descended from with the Ten Commandments, constructed a $17 million auditorium that opened in 2015 on its 70-acre campus. At that time, the venue was generously outfitted with state-of-the-art audio-visual capabilities, including a pair of DiGiCo SD9 consoles as front-of-house mixers for the church’s east and west worship spaces, used for their contemporary and traditional types of services, respectively.

This May, the Lexington, South Carolina church updated the larger of the two sanctuaries—the 1,900-seat auditorium used for contemporary worship—with the newly-introduced DiGiCo Quantum338 console, keeping it at the leading edge of worship audio technology. The Quantum338 desk was installed and commissioned by Clark, an Atlanta-based design-build firm, which also integrated two DiGiCo SD-Racks with 32-bit “Ultimate Stadius” mic preamps and one SD-MiNi Rack in the church’s video production room.

“We’ve had two DiGiCo SD9 consoles here for a while now and we really like the DiGiCo ecosystem and software, which works very well with our style and workflow, so it made sense to stay with DiGiCo,” explains Mt. Horeb UMC Production Manager and Lead Audio Engineer Seth Ely. “At the same time, we know DiGiCo really stays at the leading edge of this technology, so we knew the Quantum338 would also keep us there, too.” 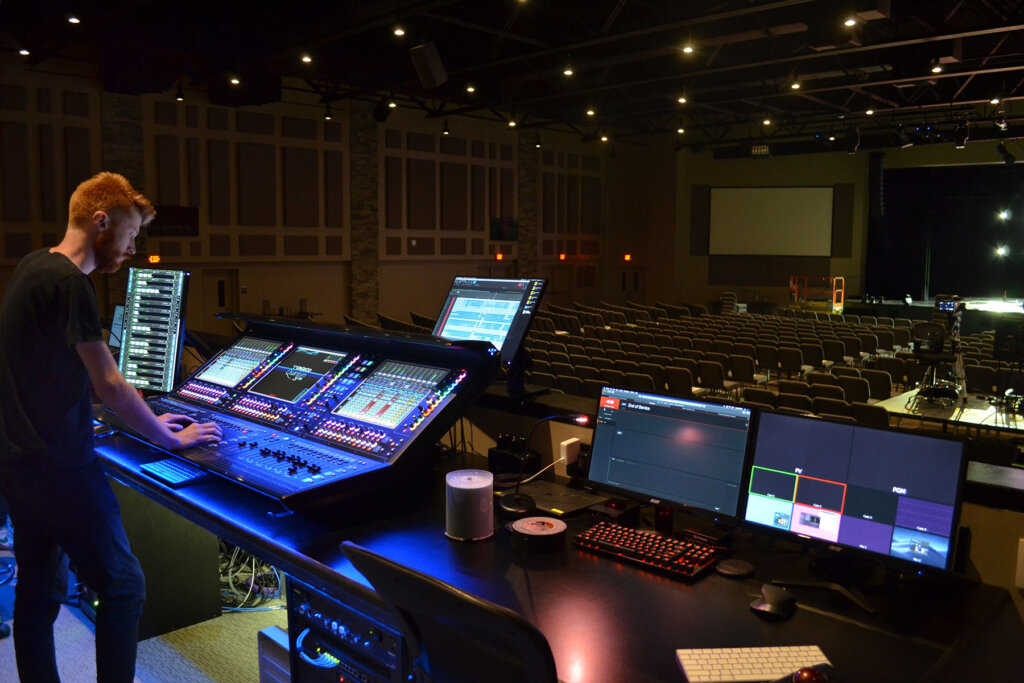 Ely, who adds that the SD9 formerly at FOH in the auditorium is now being used to mix monitors there, says they never looked far beyond that DiGiCo ecosystem; however, what they did look at were the SD10 and SD5 Series and realized that the new Quantum338 offered even more advanced features but with a similarly compact footprint and same basic work surface and workflow as the SD9 desks they already were familiar with.

“The Quantum338 came along and it was a perfect balance of those two things,” he says. “Also, our auditorium is a larger space, and the types of services we do there can vary considerably, so we needed as much flexibility as possible from a FOH console. The Quantum338 has plenty of that.”

“The challenge for this project was that the auditorium also hosts some very big touring concerts with some well-known Christian music performers, as well as the church’s Christmas and Easter shows,” explains Clark’s Brian Morrison. “In addition, the worship leader was considering adding some additional musicians onstage for their Sunday services. The SD9 is a great console, but it was reaching its input and output limit, so the Quantum338 was the perfect solution for them at this time.” 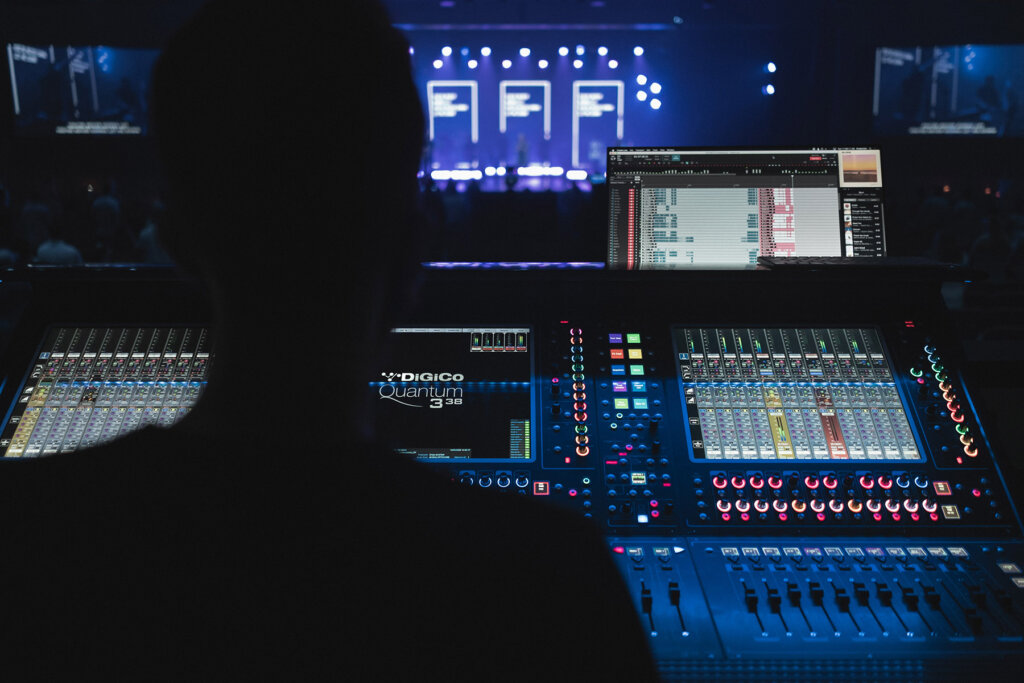 The Quantum338 desk is on an Optocore fiber loop, which makes access to the FOH and monitor consoles and the auditorium’s d&b audiotechnik PA system simpler for visiting artists and engineers. “They can plug directly into the stage pockets and access the ‘Stadius’ 32-bit mic pre’s in the racks and the console on the network,” Morrison says. “Quantum gives the church the flexibility they need as they grow while also providing a workflow they were used to, and it hit a price point that they wanted to stay within. It was right on target in every way.”

As he spoke, Ely was preparing for the Quantum338 desk’s debut performance in the church, on June 14th, but he’d already had several rehearsals on the console and discovered that its patching and routing offers plenty of versatility. Also, newer features like Mustard, Spice Rack and DiGiCo’s latest set of algorithms with options for channel strip processing, provide enhanced flexibility and choice when extra control and creative adjustment are needed within a mix. “Mustard offered me a ton of compression options, which makes live mixes much easier,” he says. “And the switching and routing flexibility is there, too. This is the right console for us, and it came along at the perfect time.”

Large Dallas-area house of worship wraps up a major AV renovation that includes Quantum338 FOH and broadcast desks, plus KLANG…