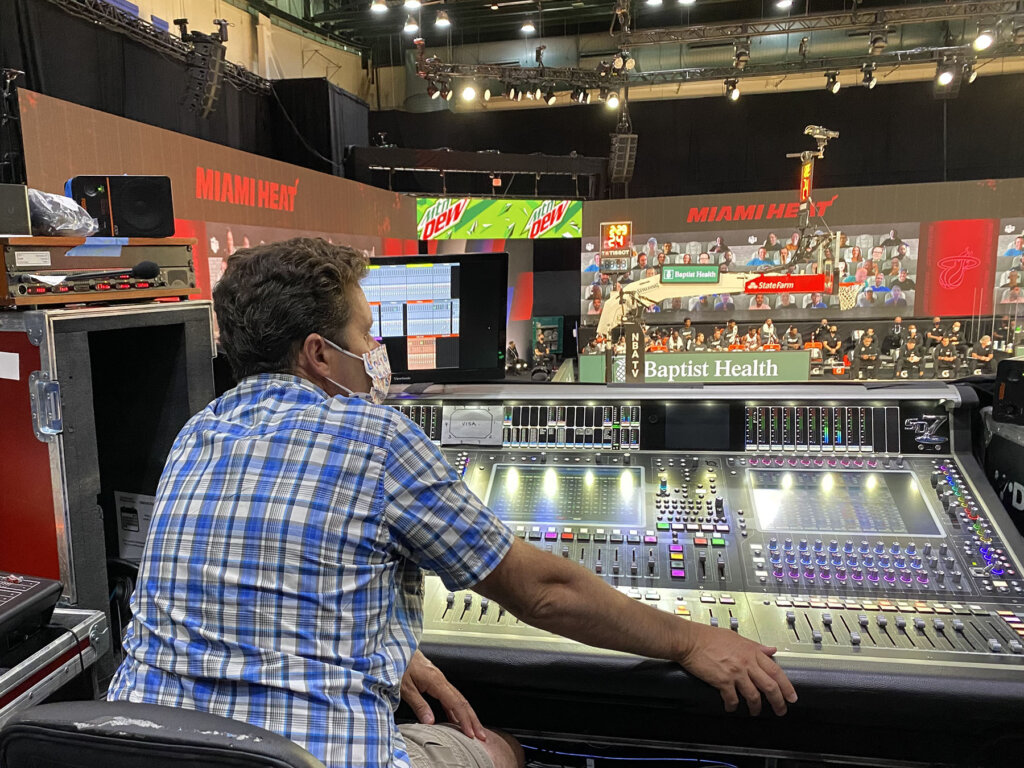 The NBA’s 2019-2020 season looked like it was going to be one of the most exciting yet. However, it was interrupted on March 11 by the COVID-19-induced sports shutdown, just before its Playoff series was to begin in April. Instead, the NBA reformatted its season, with teams playing the remaining regular-season games, Playoffs and Finals on three courts in the Wide World of Sports complex in Orlando, Florida from July 30 through October 13.

All of these games feature court sound done in a way as never before. Each venue has two sound systems: one aimed at the court, and the other at the audience. The court system is designed to immerse the NBA players in crowd and live venue sounds to emulate their traditional experience. This system is mixed through a DiGiCo Quantum7 console in each of the WWoS’s three venues: the Arena, the main national-telecast court and site of Conference Finals and NBA Finals; the HP Field House court, used for the regular season to Second Round; and the Visa Athletic Center, used for games broadcast exclusively by regional sports networks. 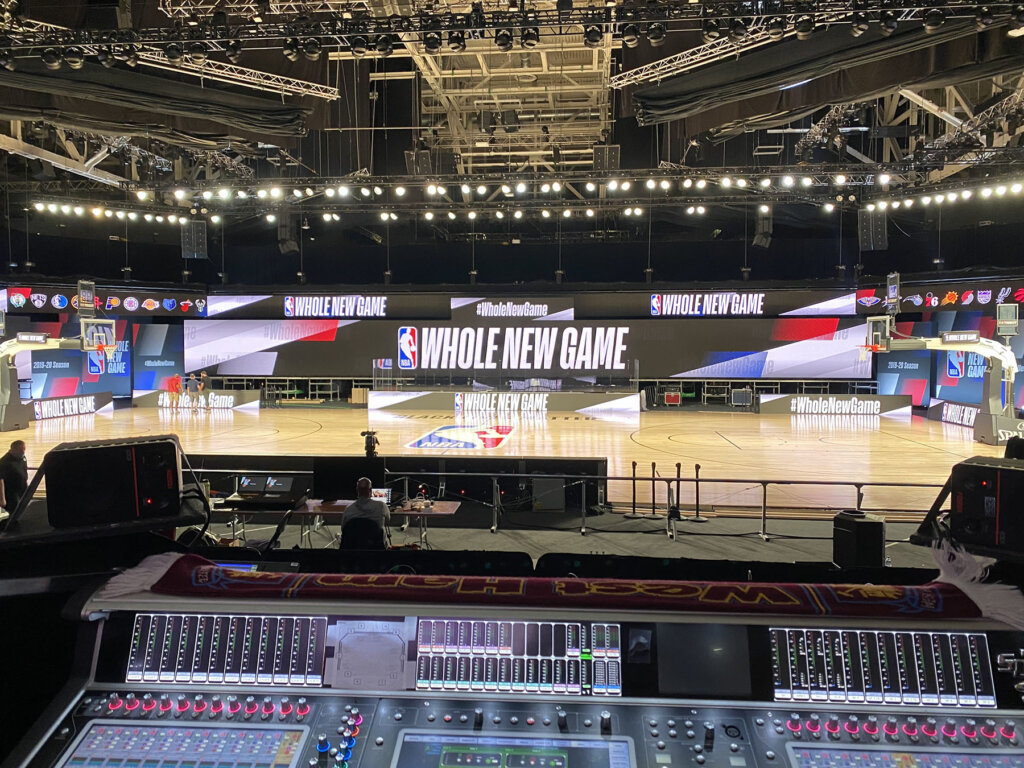 “It’s a beast,” says Firehouse Productions Vice President Mark Dittmar, referring to the Quantum7, “and that’s an understatement.” The consoles—three DiGiCo SD7 desks each updated with new Quantum engines—are the hubs for all of the audio elements that are feeding these courts. Those elements include over 1,500 individual audio clips such as cheers, boos, and other reaction sounds. These are stored on media servers and collected from a variety of authentic sources, including originally produced content, foley, and content provided by the teams and the league. In addition, the Quantum7 creates a 5.1 version of the audience sounds that is sent to broadcast for on-air use.

Dittmar says the Quantum7 assigned to the Arena was the first to be programmed and became the template for the other two Quantum7 desks. “Once we got all of our basic relative levels set there, the only mixing that’s done is on the systems that the people controlling these crowd and other sound effects are using during the games,” he explains. “The DiGiCos then become these big, reliable routers that are used for the live sound for the entire season.”

The identical configuration of each console means that any of Firehouse Productions’ A1s can move between the venues and sit at a console where they know immediately where each I/O—and there are nearly 160 inputs in each venue feeding about 56 outputs—is assigned. “Every mixer will have the exact same experience,” he adds. “And that’s a huge advantage that that keeps the sound very consistent from game to game.” 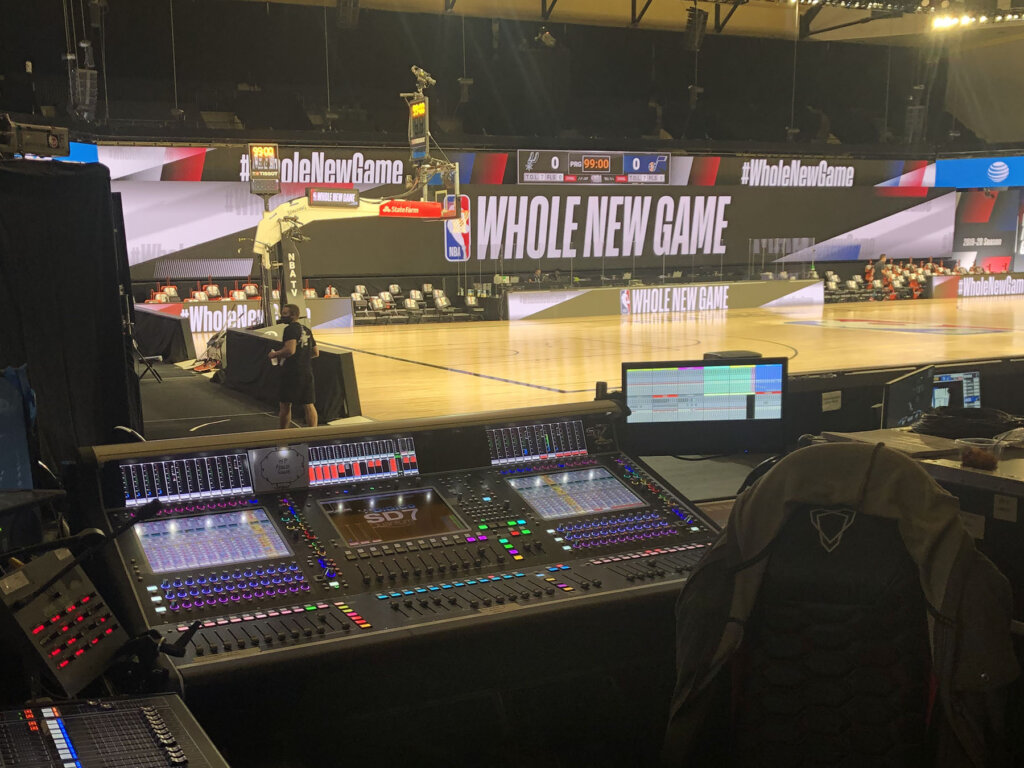 The DiGiCo Quantum7 in place at the HP Field House court

The Quantum7 consoles, and the three 32-bit I/O-equipped SD-Racks each of the three desks uses to manage that huge input array, feed L-Acoustics PA systems in each venue, whose sound is focused on the field of play. The Arena system comprises 60 L-Acoustics K2 loudspeakers configured as 10 hangs of six enclosures each, buttressed by a dozen L-Acoustics KS28 subs, with a slightly smaller PA deployed in the Visa and HP venues.

But the consoles are more than massive routers. Dittmar points out that the Quantum7 desks also provide monitor input to the mixers handling the crowd sounds and sound effects, and they additionally deliver a discrete 5.1-surround feed to the broadcast compound. “The Quantum7s reliably handle a huge workflow,” he says. And the consoles’ features are also making their presence felt, providing the slots for the Dante cards that are taking in the audio from those submixers, 10 channels each from three laptop sources per venue.

“No other console that I know of can handle that kind of huge input load,” says Dittmar. “It’s an awesome tool for the scope of this. These are extremely high channel counts feeding a unique PA system for a major-league sports event that’s never been done before. For its reliability under that kind of pressure, for its processing capability, and for its I/O capacity… that’s why DiGiCo’s Quantum7 was the only choice for this.”

For information on this season’s NBA schedule, visit www.nba.com. Firehouse Productions can be found online at www.firehouseproductions.com.

Created as a place to “let creatives get creative,” Sixth Sense is the response envisioned by 3G Productions as the…

The COVID-19 pandemic has produced a wide variety of music shows online. Unfortunately, it’s also resulted in a wide…

Every week for the past seven years, Jimmy Fallon steps onstage in Studio 6B at Rockefeller Center in midtown Manhattan…