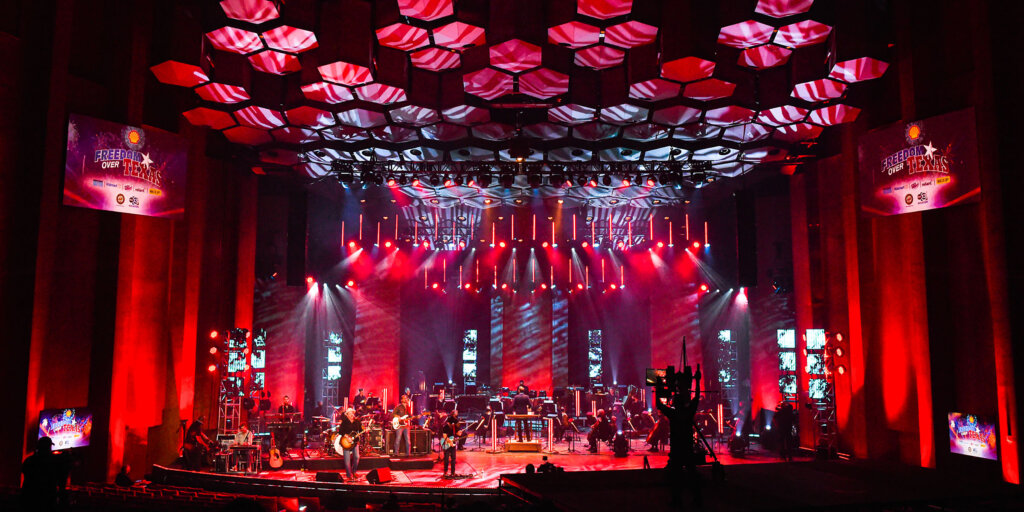 Doing live music performances during the COVID-19 pandemic has compelled live sound companies to use every resource at their command to ensure that shows sound and feel authentic, even when performances have to take place without a live audience. That was recently the case at the City of Houston’s “Shell Freedom Over Texas” July 4th celebration, a live broadcast that paired artists including headliner Pat Green, Trae tha Truth, Bun B, Los Luzeros De Rioverde, Mariachi Imperial, and virtual performances from Lyle Lovett and La Mafia with the Houston Symphony Orchestra in its Jones Hall venue. The three-hour-long music show was televised live on local ABC Channel 13 and culminated in a live fireworks display, all mixed through a pair of DiGiCo SD10 consoles provided by audio vendor LD Systems and linked to three SD-Racks with 32-bit input cards and sharing I/O via an optical network. 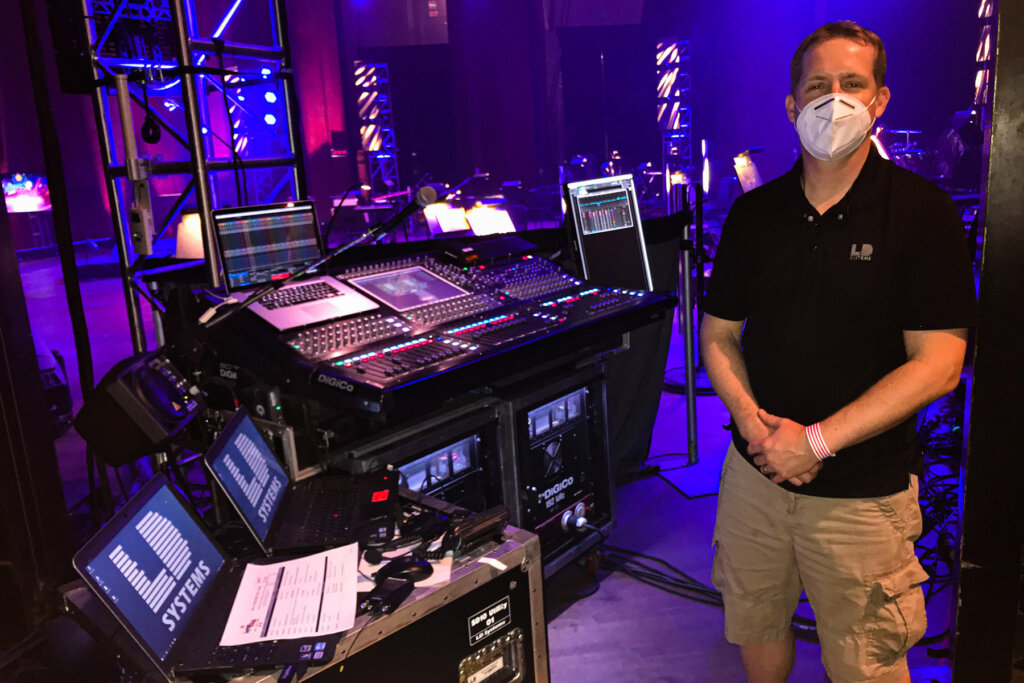 One SD10 was at monitors, where LD Systems Audio Department Operations Manager Thomas Ruffner managed three downstage monitor wedge mixes and eight IEM mixes for artists, plus five wedge mixes for the orchestra, as well as sending left-right program mixes to other points around the stage and to a mult for a press/media position. Meanwhile, LD Systems A1 Rafael Rosales mixed the concert portion of the broadcast live on ABC 13 through a second DiGiCo SD10, sending his stereo mix to the station’s remote-broadcast production truck.

“For me, being able to customize the SD10’s layers for each music artist at rehearsal, and then being able to quickly call those up during the show was what made all the difference,” says Ruffner, who mixed wedges and IEMs for nearly a dozen artists as well as a L-R mix used in the house PA at the venerable Jones Hall, which opened in 1966 and has been the Symphony’s home ever since. 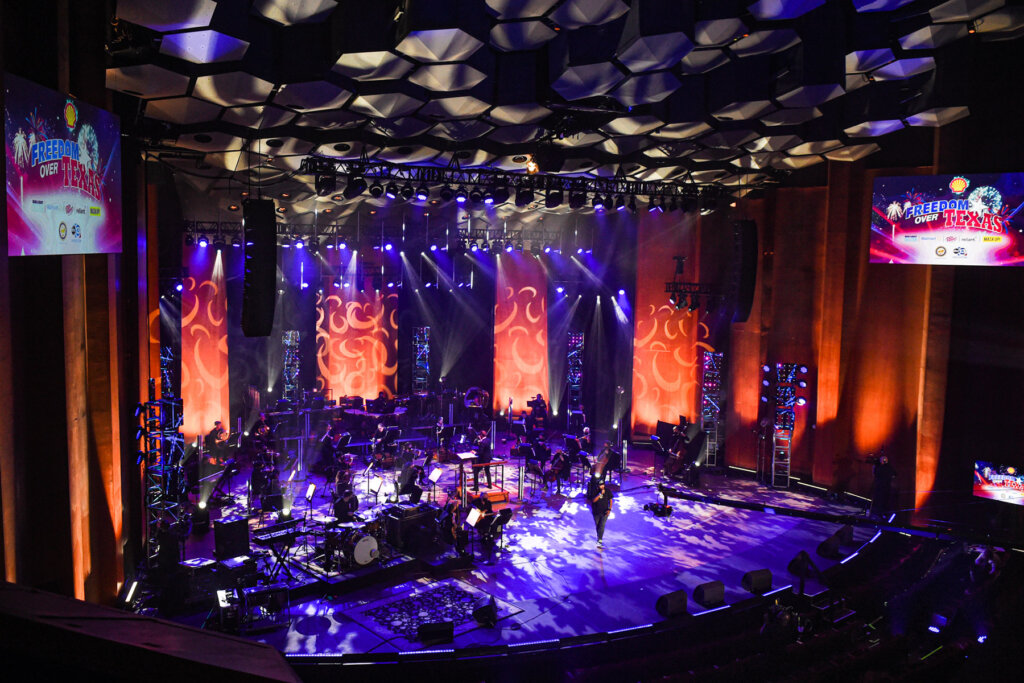 “By the time the rehearsals were finished, I had the entire 112 inputs of the show on just 24 faders within two fader banks. I had one layer for each segment of the show, so I didn’t have to worry about using snapshots or sharing channels. I had a fader for every element of each performance and in addition to all of the monitor mixes I was managing, I was also able to send a left-right mix to the Jones Hall’s FOH mixer so we could have the house PA on at a low level to put some energy in the room for the performers. Using a combination of control groups and input faders made the show flow easily from one artist to the next.

“I was also easily able to take both a split of the inputs from Pat Green’s band, who carried their own production, as well as their left-right mix. This allowed me to mix inputs from Pat to monitors for the orchestra without the need to ask Pat’s monitor engineer to generate additional mixes for the orchestra. Doing shows like this during times like these can be challenging, but the SD10 made sure that the console was the smoothest part of the production.” 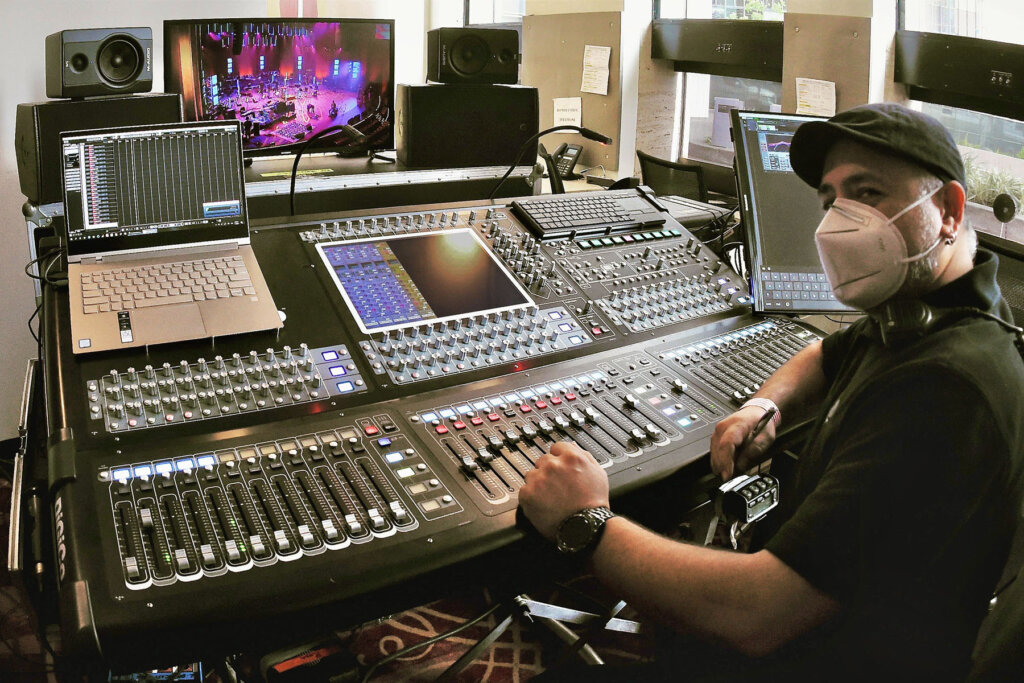 “Inputs everywhere,” is how Rafael Rosales describes working on an SD10 atop the optical network. Rosales points out that the ability to record directly from the SD10 to Cubase software on a laptop—using a DiGiGrid MGB interface over MADI—then use those recordings to recreate the mixes, practice them, and get feedback from the various artists and their mix engineers assured that each performance would be as perfect as possible. That was critical, he says, because the rehearsals that took place the day before the actual performances were also the LD Systems audio crew’s only sound check.

“We had that capability at both consoles, so Thomas and I were able to get inputs from each other and move between the consoles seamlessly,” he explains, noting that Ruffner was using Tracks Live software at his desk. “Plus, we were both recording, so if one DAW failed, the other was there as a backup.” 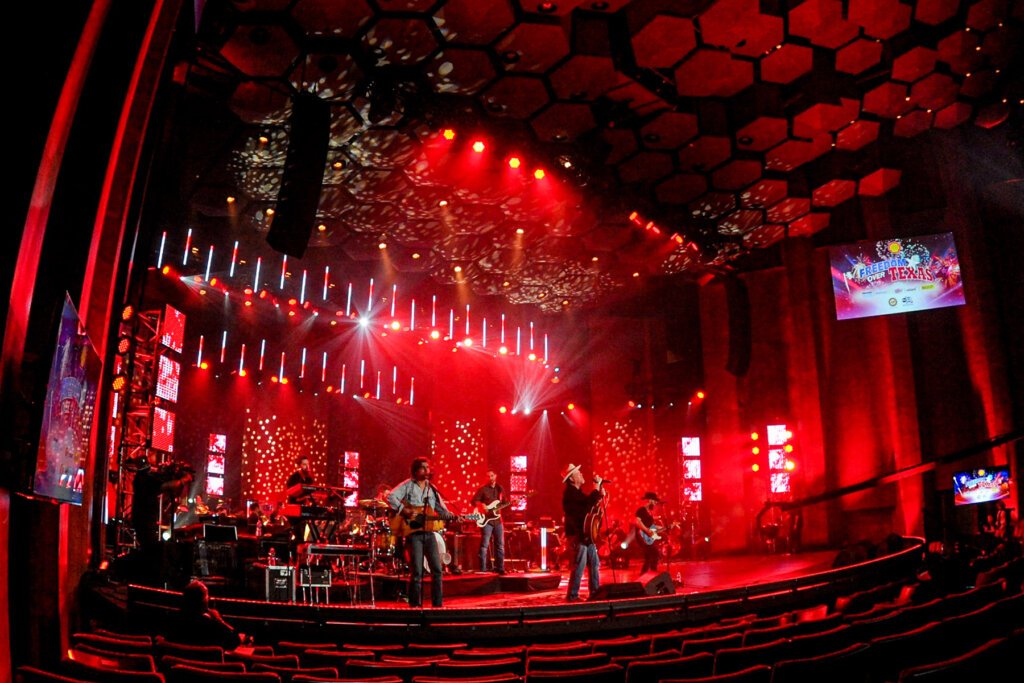 The recorded rehearsal mixes were also useful in minimizing the time that artists and others spent on and around the stage, which was an important factor in maintaining the “safe distancing” protocols put in place for this event. In fact, Rosales was able to set up his mix position inside the hall’s ticket booth where a video feed kept him apprised of the rehearsals, and then the shows, and keeping him safely apart from the action on stage. The SD10’s ability to let engineers create detailed macros, which can be assigned and accessed instantly via the console’s 40 Smart Key Macros (accessible via four layers of 10 RGB backlit keys) at the push of a button, made managing the live broadcast mix much easier and more precise. “Everything I needed was always just right there,” he says. “No chasing channels. And I could also use the macros to be able to switch between monitor speakers. Everything I need is right there at a click.”

Finally, he adds, the SD10 was able to accommodate and integrate the Clear-Com FreeSpeak intercom system that linked the console operators talkback mics with the A2’s wireless intercom beltpacks. “We’re able to route the audio from the intercom to my sends and receives through the console,” he says. “The SD10 made this show extremely manageable, and that helped make it a great Fourth of July.”

A pair of SD5 consoles handled front-of-house mixing for well-received performances by Jennifer Lopez and Shakira, while two Quantum 7…

Farmingdale, New York-based Group One Limited, the US distributor for a number of premium professional audio and lighting brands, has…

NAMM 2020 sees DiGiCo reveal the latest in its new generation of Quantum consoles, the all-new Quantum338. Like Quantum7 and the new Quantum5, Quantum338 represents a dramatic leap forward in power and connectivity