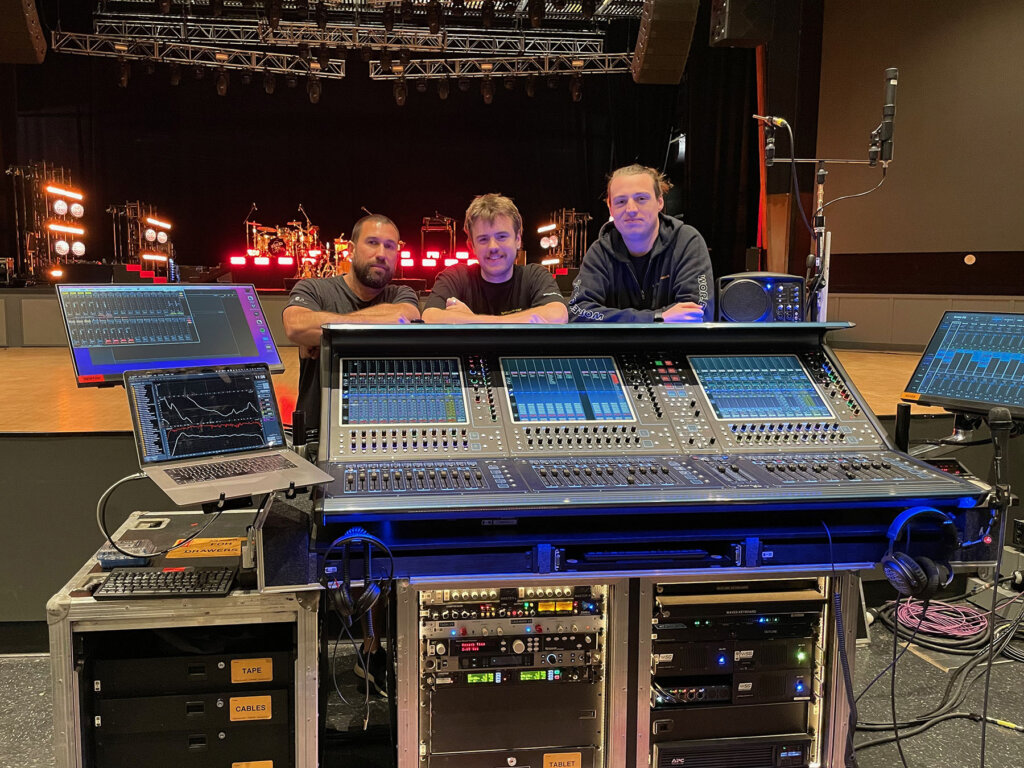 Australian singer, songwriter, multi-instrumentalist, and producer Tash Sultana is back out on tour for the first time in three years supporting their sophomore 2021 release, Terra Firma. Following an initial 15-date jaunt across Europe and the UK in March and April, Sultana has just now completed a 32-show North American trek, which kicked off on June 10 in Las Vegas and wrapped up on July 24 in southern California. For the run, Nashville-based Worley Sound supplied the tour with its FOH and monitor control packages, both of which were built upon DiGiCo Quantum338 consoles.

Although Sultana is likely best known as a “one-person band” for their looping and layering of riffs, beats, and vocals—perfectly exemplified on the artist’s 2016 social media breakthrough, “Jungle”—the current 2022 world tour finds Sultana morphing from a solo act to a full band setup for the first time.

“I started touring with Tash in 2017 and carried a DiGiCo SD11i system that I loved on many dates around the world for the solo years,” says Perth-based FOH engineer Sam Perrignon. “I had it racked in a case above a 12U rack housing my Lake processor, Waves servers and RF measurement receiver, with an array of Ergotron arm mounts, and I really appreciated its efficiency and being able to maintain a very small footprint at festivals.

“However, as our channel list has now significantly grown, mixing on a larger surface is certainly an improved experience and I am really enjoying the Quantum338 with its center-screen processing section, daylight viewable screens, and bridge-light/sun-shield. The console’s worksurface is great—I have speedy access to everything I need—and the DiGiCo-Waves integration is nice and fast, keeping my fingers away from the touchscreens as much as possible. Also, software-wise on the Quantum series, I’m already a big fan of Mustard processing across all of the acoustic drums, with the VCA compressor type being a particular favorite.” 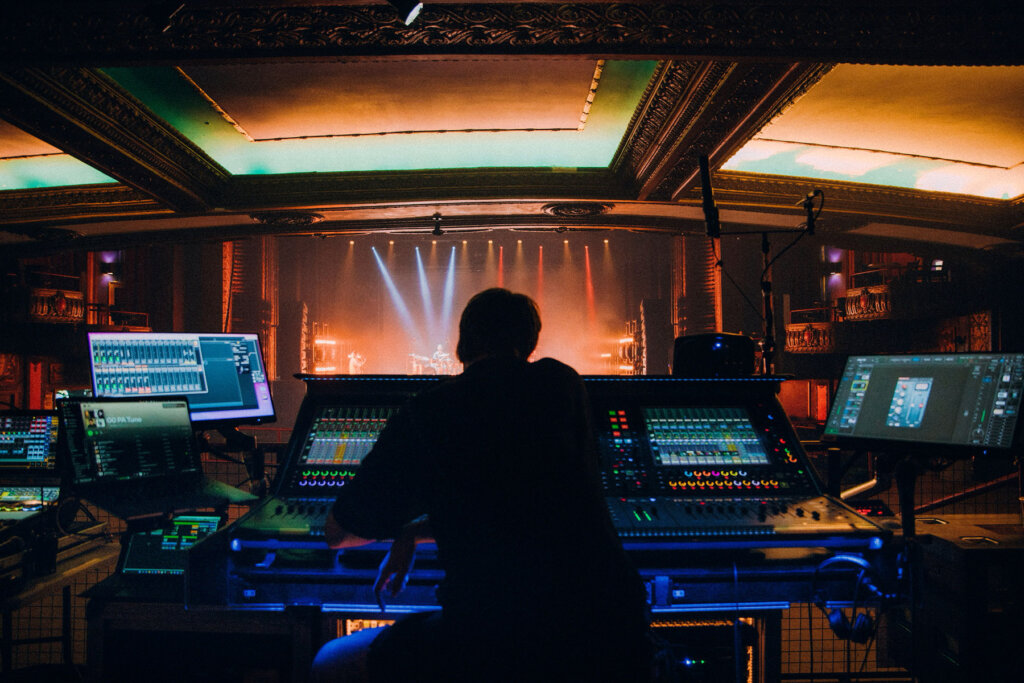 Excluding talk and utility inputs, Perrignon notes that there are approximately 70 inputs coming from the four members onstage where he shares a 32-bit module-loaded SD-Rack with another Quantum338 carried for monitors. “There is a mix of analog inputs from the SD-Rack and MADI inputs from playback that are piped into the monitor console and copied onto the Optocore network,” he describes. “The band side is fairly conventional, but for Tash’s solo section, a lot of the show is mixed on groups. As I receive direct and looped inputs, this avoids doubling up on external processing.”

He adds that he also has a few choice pieces of outboard gear on his SD-MiNi Rack at FOH and uses the console’s Waves port for all Waves processing, plus two DiGiGrid MGBs on a separate network for recording and Smaart I/O. “I use Waves primarily on groups, Tash’s vocal and FX as well as an outboard Smart Research C2 on my LR, API2500+ on drums, Rupert Neve Designs Portico 5045 enhancer for vocal, and a Bricasti M7, but a lot of the processing is nicely handled onboard the Quantum338.”

Hailing from Wollongong, just south of Sydney, monitor engineer Jordan Tanner has also been working with Sultana since 2017, when he and Perrignon established their touring and production management company, RTA Touring. “When Tash decided to add a backing band, it became apparent early on that we were in for a busy gig,” Tanner says. “Given our input list, once you consider FX and utility inputs, the number of required channels blows out pretty quick. I’m using over 120 input channels, and it’s imperative that I’m able to make things happen very fast and without fuss. Having worked on all SD surfaces, I feel that the Quantum338 surface is right up there among the fastest. I find the master section particularly well laid out, as far as macros, snapshots and talk sections go—and two master faders is of course a huge win!” 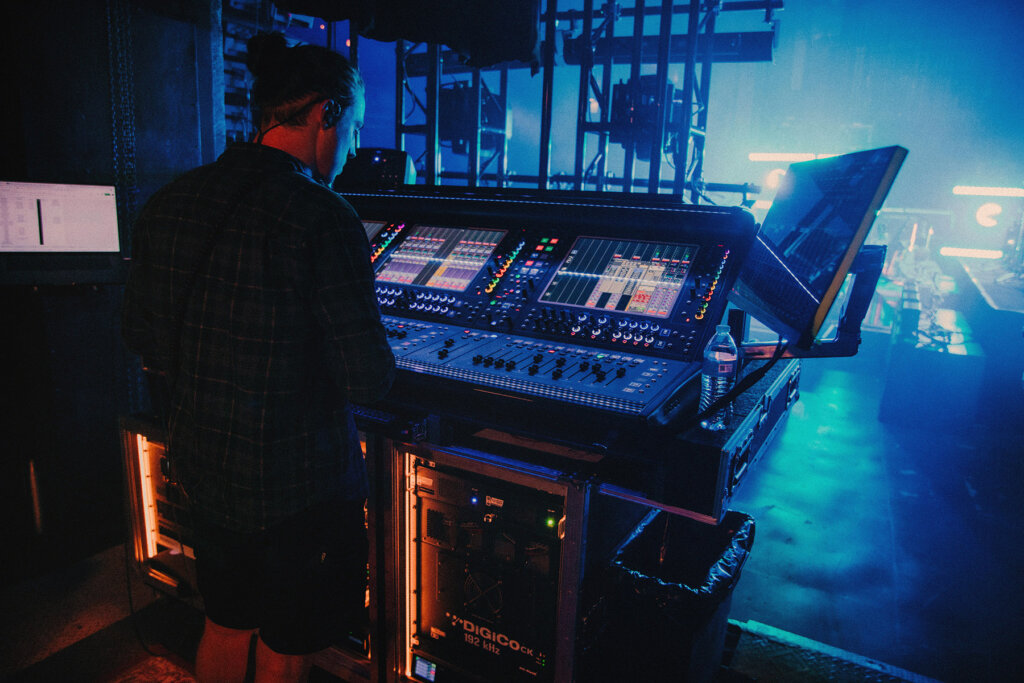 Tanner points out that he prefers to keep things “as onboard as is possible,” he says. “I do have a Waves system out with me for a couple of specific plugins that Tash likes to hear to replicate their studio chains, but for the most part it’s all onboard processing. Keeping things centralized within the console means my attention isn’t divided across multiple platforms and keeps my automation reasonably straightforward. I find there are more than enough routing and processing options to get me where I want to be, especially so at stage left.”

As for Quantum338-specific features, like Perrignon, Tanner enjoys the new Mustard processing, particularly its compression options. “I’ve found that it’s so much easier to get the sound I’m looking for out of the wider range of compressor styles offered in the Mustard channel. The full processing controls for the center section of the 338 are also excellent. I feel much more fluid working across three identical banks of the console, which is big part of the reason for my love affair with DiGiCo’s SD12.”

Another amenity that Tanner appreciates on tour is working with the new console’s MIDI functionality. “Our playback guy, the illustrious James Luscombe, has a MIDI controller at his station that can fire macros on my console to route his talkback mics to particular performers and crew. He’s also sending me program changes out of Ableton to automate the firing of my snapshots. Said snapshots also output MIDI to my Bricasti M7 to recall song-specific reverb presets, which means I’m not having to constantly reach down and adjust it.”

Both engineers are quick to praise Worley Sound, which furnished the consoles for the North American trek. “When Tom Worley launched his company last year and we saw the quality of the control packages he was putting together, we knew it would be a great fit as Jordan and I are massive fans of a nice rack build, having spent a lot of time building them ourselves. So big thanks to Tom for providing such an excellent package—it’s been a pleasure to load in every day—and to audio tech Steve Donovan and the rest of the crew who have been on the road with us. They’re excellent humans and we’re very much looking forward to working with them again.”

“And, of course, big props also to DiGiCo and their support,” adds Tanner. “As everyone is no doubt already aware, they’re the best in the game.”

Sultana’s recent North American leg of the Terra Firma Tour found them performing at Denver’s Red Rocks Amphitheatre, NYC’s Pier 17, Vancouver’s Orpheum Theatre, the Hollywood Palladium, and numerous other venues in addition to a slot at the Bonnaroo Music Festival. For more details on the artist and their upcoming tour dates, visit www.tashsultana.com.

Details on Worley Sound and RTA Touring can be found online at www.worleysound.com and www.rtatouring.com, respectively.