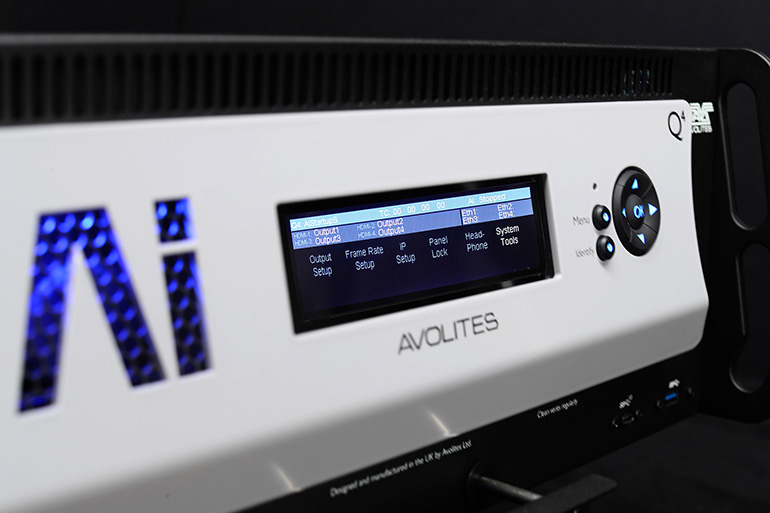 Avolites will be announcing its full range of Q-Series media servers, designed to meet all of your pixel processing needs for every performance and project, along with its new Ai v12.1 release offering Pioneer PRO DJ LINK Bridge integration software. The full lineup of media servers includes the Q3, Q3pro, Q4 and Qgen, giving you the complete solution to power every performance.

Video content and projection mapping have become major components in many of today’s performances and installations, and with Avolites’ Synergy feature set, integrating video into your designs has become even easier. Hence, the next step for Avolites was to create the ideal hardware to complement its powerful Ai software.

“Seeing the projects and shows that Ai has been used on made us realize that we needed to provide servers powerful enough to meet the creative vision of our users,” says Avolites Ai Lead Developer Ciaran Abrams.

The Q3pro is the perfect portable server for the more demanding shows with two 4k outputs and one HD along with EDID-managed HDMI outputs.

The Q4 gives you the power to deliver breathtaking detail with four 4k outputs and flexible input modules so you can design your server to meet the most demanding needs.

With the rise in use of interactive real-time generative content providers like Notch, the Qgen is designed to deliver stunning graphics via three 4k outputs and a powerful NVIDIA QUADRO RTX 6000 graphics card that can deliver approximately 30,000 Notch marks. The Qgen also comes with a two-year Notch playback license.

Avolites will be releasing its new range of Q-Series media servers this spring, providing the ideal media processing solution for every size of visual canvas.

“We worked with our customers to understand what technology and features matter to them. Seeing these now developed into the new Q-Series range is very exciting, and is just the start for where we see the future of the Q-Series,” says Avolites Managing Director Paul Wong.

Come experience the Q-Series media server range in action with stunning interactive displays designed by IKONIX and Notch at our trade show events throughout this year.

Avolites will be announcing its Ai v12.1 software release with the new range of Q-Series media servers in spring 2020, further powering every project and performance

In this release, the key feature updates include:
• 64-bit architecture, allowing Ai to support the latest Notch blocks for dynamic, generative content. Ai v12.1 will now only work on 64-bit versions of Windows and support 64-bit Synergy and USB Expert.
• AMD Texture Upload, which will allow additional layers when used in conjunction with an AMD graphics card.
• Supports audio standards 5.1 and 7.1, providing additional audio channels, ideal for corporate events and art installations.
• Pioneer PRO DJ LINK Bridge integration. As an official partner of Pioneer DJ, we have developed a tight integration with PRO DJ Link Bridge-compatible products such as the CDJ-TOUR1, DJM-TOUR1, CDJ-2000NXS2 and DJM-900NXS2.

For full details of the features in this release, visit: www.avolites.com/software/latest-version

Avolites and Weigl were proud to recently partner on The Wildwood Tree, a unique installation located within Wildwood Grove at Dollywood