Toronto, Canada — Built out over the past few years beginning at the start of the pandemic, 793 Studios in Toronto is a one-of-a-kind facility that offers film, TV and commercial clients a complete package of production and post production services. In early 2022, the new complex, housed in what was once the largest independent film studio facility in Canada, expanded into music production with the installation of a new Solid State Logic ORIGIN 32-channel analogue mixing console. 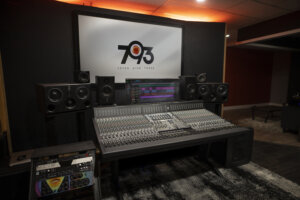 “It’s probably the best investment we’ve made here,” says Paul Irving, founding partner at 793 Studios and a former musician and recording studio owner with a lengthy career in the advertising industry. The new ORIGIN desk, which is also fitted with an SSL UF8 Advanced DAW Controller, has been a great calling card for the company’s expansion into music production, he says: “It instantly attracted attention, so it’s doing its work without even being plugged in. The traction that it gets, just by sitting here, brings a whole other dynamic to what this place does. The bonus is how good it sounds.”

The complex was purpose built in the late-1970s as a film production studio that attracted major projects starring the likes of Marlon Brando, Robert DeNiro, Jane Fonda and Cher, as well as John Candy, Eugene Levy and the cast of SCTV. Newly renovated by 793 Studios, the 85,000-square-foot building features two 15,000-square-foot soundstages along with picture and audio post production suites, kitchen facilities with an on-staff chef and in-house accommodation for executive clients. “We had a vision for this facility to make it an all-in-one, tier-one production facility that doesn’t exist anywhere,” Irving says.

The building houses three audio production studios, including a Dolby Atmos-certified mix room and a development and writing room for artists. The latest studio, completed in the second quarter of 2022, was custom built for the new ORIGIN console and is named, appropriately, the SSL Room. “We invested in some ATC monitoring — two SCM45A Pro loudspeakers and two nearfields — plus two Avantone Cubes, which you need in the commercial and film world,” Irving says. The SSL ORIGIN and UF8 were supplied by pro audio retailer Long & McQuade in Toronto. 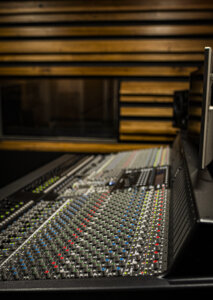 ORIGIN with UF8 in the center section

“We do a lot of ADR work for film and some Foley, so we put the UF8 Advanced DAW Controller in the center of the ORIGIN. You still get the integrity and the sound of the ORIGIN going through the Pro Tools system,” Irving says.

The ORIGIN was initially installed with scoring work in mind, by clients as well as the company’s in-house composers. The SSL Room, which has two adjoining sound booths, one large enough for a couple of musicians or even a large drum kit, is located immediately next to one of the soundstages, which is also available for orchestral recording sessions. “And we’re contemplating starting our own record label now, because of the SSL board,” he says. “Because there’s nothing we can’t do in here.” 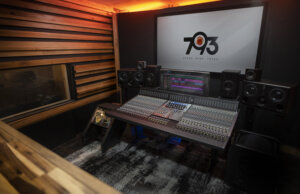 The company is currently in talks with a major label regarding a distribution deal, Irving continues, and already has development opportunities with top Canadian artists and looking to expand its flex through the global market. “We’ve got some great young talent from all genres that really does express the true grit of the ORIGIN’S capabilities. The SSL Room has recently been used with iconic Canadian rock band Econoline Crush to mix some tracks for their new album,” he says.

Irving is looking to leverage the ORIGIN’s performance to create a sonic signature for the studio and all the different levels of production that the facility pushes through. “I’ve told my engineers that I need to have a 793 sound. I need to have something that X studio down the street can’t do. So I’m leaning on the ORIGIN a little heavier to do that.”

Ultimately, he says, “We wanted to build a studio, not for clients, but for talented engineers. That’s how we build each room in here. I said, ‘What if we can bring in an SSL with some good monitors, good preamps, good mics?’” A room that sounds that good would be sure to attract talent, he says. “And if you get the engineers, the work will come.”

SSL goes back to its roots once again, expanding the ORIGIN console range with 16-channel variant OXFORD, ENGLAND — Solid…