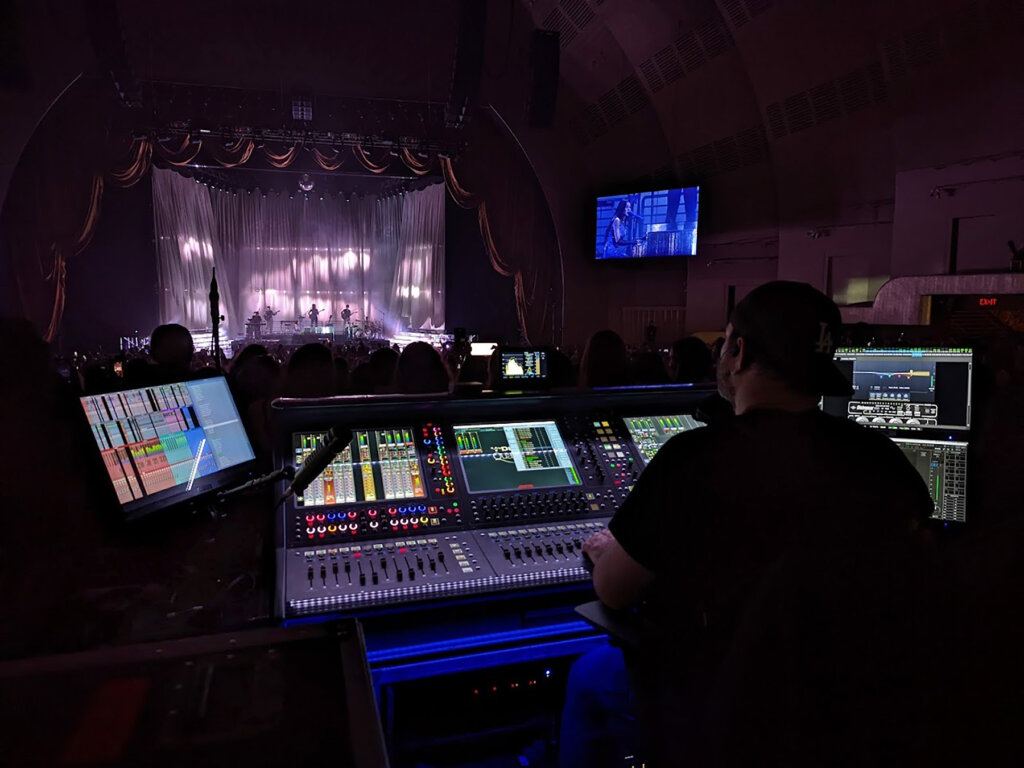 With two Grammy Awards, six Billboard Music Awards, three Apple Music Awards, three MTV Video Music Awards, TIME’s Entertainer of the Year recognition, and many more accolades over the past year to her credit, Olivia Rodrigo is arguably the hottest ticket out on the road right now. Backed by a tight, five-piece live rock band, the 19-year-oid former Disney TV star sold out every show of her recent North American tour leg, and is now traveling across Europe and the UK this month to continue her 40-stop tour in support of her RIAA double-platinum certified debut album, SOUR.

Clair Global is serving as the sound reinforcement partner for the full run, and has supplied a pair of new DiGiCo mixing consoles for control: a Quantum338 for Los Angeleno FOH engineer Brian Pomp, and a Quantum5 for UK-based monitor mixer Seamus Fenton. Although the two audio engineers have only been working with Rodrigo since March, neither are new to the DiGiCo platform.

“I first toured on a D5 Live back in 2004 and have pretty much been using SD-Range consoles since they were available,” says Pomp. “And even though I’ve used a lot of different consoles over the years, I keep gravitating back to DiGiCos due to their endless features. They just do everything.”

The SOUR Tour does mark the first time he’s been on a new Quantum338, though, and the experience has been overwhelmingly positive: “I absolutely love mixing on this desk. Its workflow and ergonomics are perfect for me—everything is laid out really well. It looks great—the daylight screens are stunning—and it sounds great, especially with the 32-bit cards we’re using in the SD-Rack and SD-Mini Rack that Seamus and I share on a loop.

“Also, the new Quantum features with the Mustard dynamics and EQ section make a huge difference. Having the All Pass Filter option on the Mustard EQ is a game-changer for taming some unruly frequencies, particularly in a vocal mic. The SD dynamics section was always intended to be neutral in every way possible and to not impart anything to the signal, which forced users to go outside of the desk, but with the Mustard section, I can get a lot of character now that just wasn’t available before. I can see myself opting for this desk for a long time.”

Pomp reports that he uses a Waves SoundGrid Server with SuperRack to handle utility plugins like NS1 on guitars and bass “to cut down on some inherent noise” as well as some transient shaping plugins on drums. For tonal processing and other effects, he turns to UAD-2 Live Rack. “Their emulations of analog modules are superior to most things out there,” he says. “That being said, I am using a lot of the desk’s onboard processing as the Mustard dynamics section is fantastic and those compressor choices are perfect for what I need them for.” 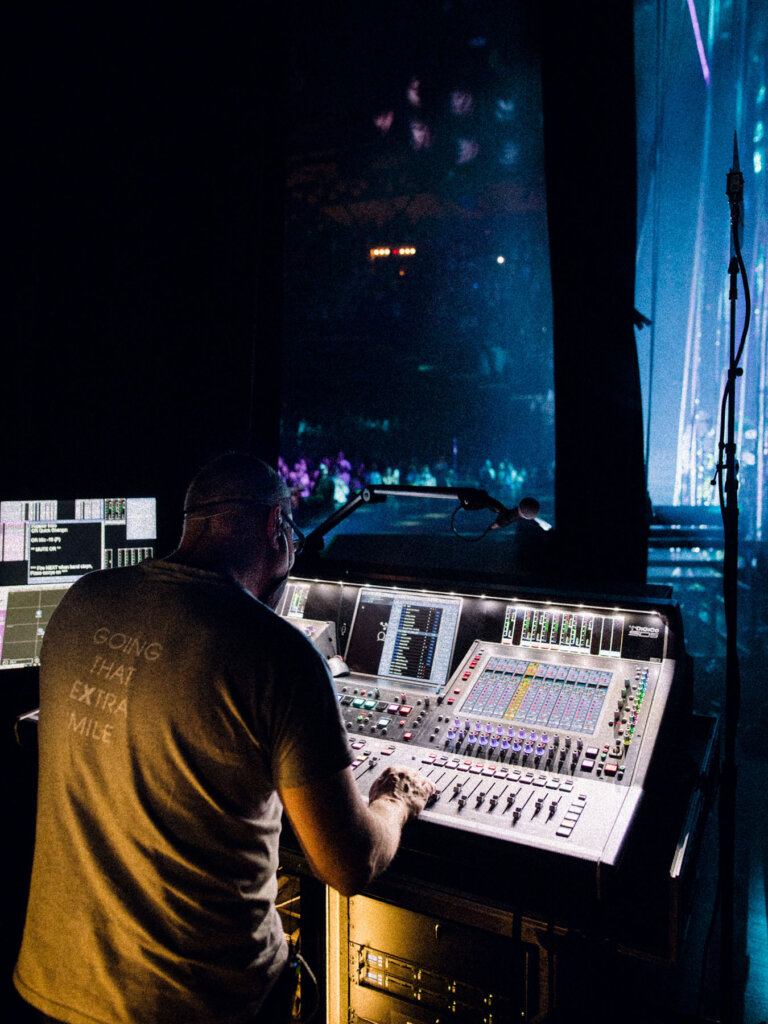 On the other end of the fiber, over in monitor world, Fenton is manning his mixes on a Quantum5 equipped with a DMI–KLANG card. “I have used DiGiCo almost exclusively for over ten years, but this is the first time I have toured with KLANG,” he describes. “This is pretty much a hard-hitting live rock and roll show with minimal use of tracks, but I’m using the KLANG to position the playback channels so they add to the live instruments without cluttering the mixes, and it has definitely made a difference. But the real game-changer with KLANG, in my opinion, is the click track. I realize that it is not the most exciting input on the channel list, but positioning it high and in front is revolutionary. It sits in the mixes at a lower level so there is less fatigue and the brain just seems to know exactly where it is. I know I’ll be incorporating more KLANG channels into the mixes as I go on.”

Fenton is currently supplying eleven IEM mixes, plus a couple of sub outputs for the drummer and bassist, from his Quantum5. “On monitors, it’s all about speed of operation and having a full audio toolkit at your disposal, and the Quantum5 has that in spades,” he shares. “It’s a great monitor workhorse—it’s a good size and I do particularly love it for its plentiful and well-placed Macro buttons. I’m occasionally tempted to look at other console brands, but then realize that there inevitably seems to be something that they can’t do that I have always done on a DiGiCo.”

Although the monitor engineer doesn’t have a strong preference on which model he uses, what he says has now become “essential” is that the desk has a Quantum engine. “The new engine brings so many excellent options to the table these days,” he says. “I love the Nodal Processing, which has some serious benefits. The Mustard compressors have been a real game-changer on this tour as well, just for smoothing things out in a very musical way. Also, I’d rather not run external plugin packages if I can help it, so the addition of the Spice Rack for me is a big thing. This is the first tour I have done since the Naga 6 dynamic EQ was added and I absolutely love it.

“With the Quantum5, you always know where you are, and the console has performed faultlessly for me. One of the truly great things about the DiGiCo infrastructure and workflow is that if you can think it, you can pretty much do it.” 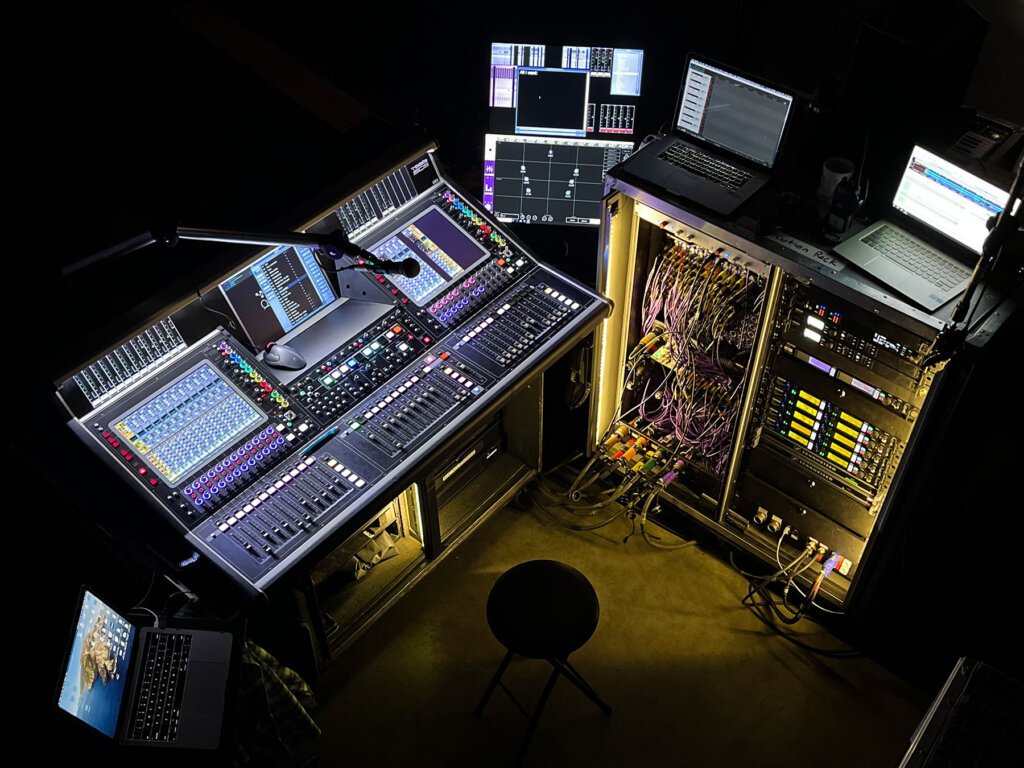 Olivia Rodrigo’s SOUR Tour kicked off on April 5 in Portland and wrapped up its North American run on May 27 in San Francisco, stopping at such iconic venues as NYC’s Radio City Music Hall and LA’s Greek Theatre. Following a brief fortnight break, the tour resumed overseas in Hamburg, Germany on June 11 and will close out with a two-night run at London’s Eventim Apollo on July 6 and 7.

For details on upcoming European and UK tour stops, visit www.oliviarodrigo.com. Clair Global can be found online at www.clairglobal.com.