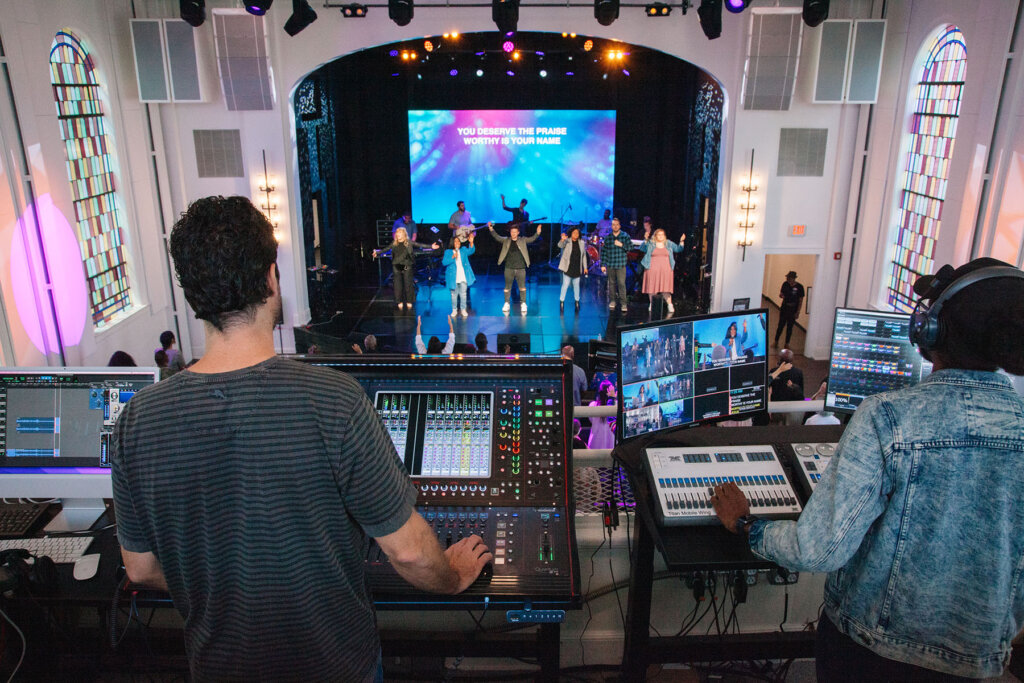 In recent years, the push towards inclusiveness and diversity within worship communities has brought broader demographics under one roof. A good example of that is Nashville Life, the 10-year-old ministry founded by gospel artist and 15-time Grammy Award-winner CeCe Winans and her husband, Alvin Love II, and where their son, Alvin Love III is now lead pastor. While the church has been in existence for a decade, it has only this year found its own home, a newly renovated former church building in Nashville’s Nolensville Road neighborhood, itself one of the region’s most diverse.

Not surprisingly, Nashville Life also has the most flexible set of audio solutions to meet its particular needs: a DiGiCo Quantum225 console, buttressed with four Dante-enabled A168D stage boxes along with a DQ-Rack in the amp room, for switching and patching, all on a Dante network, as is the church’s new EAW KF810 sound system. In  addition, an even one-dozen KLANG:kontrollers—six connected to Shure PSM 1000 IEMs and six hard-wired IEMs for the band members—provide the church’s musicians and vocalists on stage with a highly customizable but very easy-to-use monitoring solution at their fingertips. 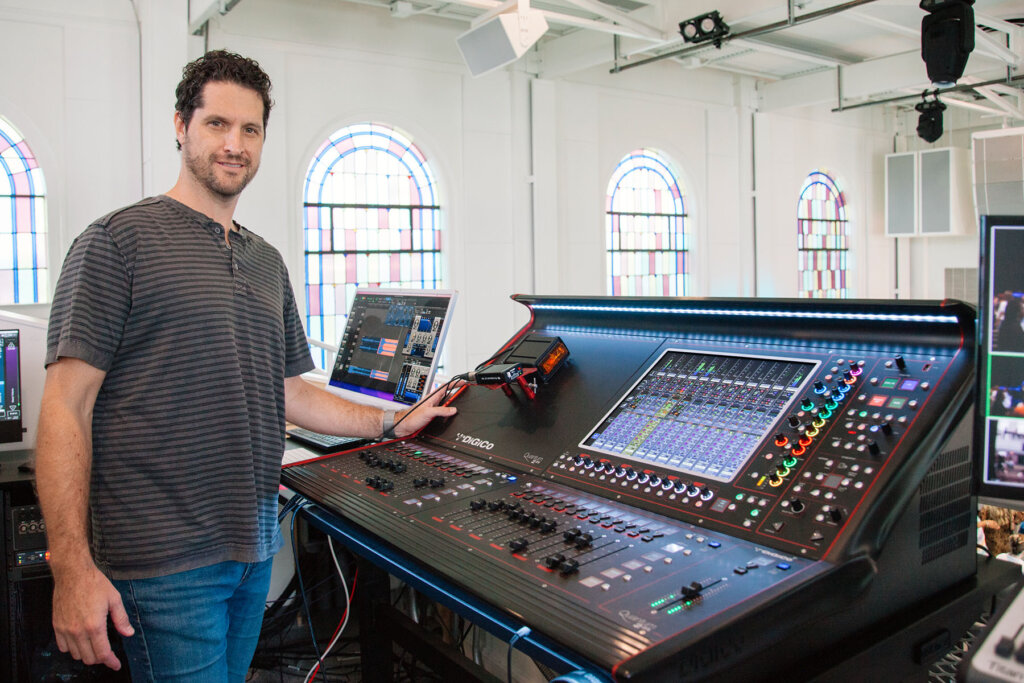 Nashville Life is volunteer-driven, including Trey Smith, the church’s most experienced live-sound mix engineer and one of three whose technical capabilities range from expert to ambitious. “That’s why the Quantum225 was such a good choice for the church,” he says of the new 350-plus-seat auditorium, which opened this spring with the new DiGiCo console and DQ-Rack, KLANG monitoring solution, and EAW line array system installed by locally-based Blackhawk Audio. “For those of us with experience in touring, we’re already familiar with DiGiCo, and if not, it’s such an intuitive, logically laid out console to learn. I was able to set the console up so virtually any user could walk up and start mixing—it’s that easy.”

The Quantum225 is also handling the church’s entire audio workload, from front of house to monitors—the 12 KLANG:kontrollers are connected via direct output from the console through a DMI–KLANG expansion card that supports up to 64 input channels—to a separate buss mix for the church’s streaming audio. “It sounds complicated, and the console is maxed out,” says Smith, who also tours as the FOH engineer for country star Thomas Rhett, “but the Quantum225 handles it all and is still simple for anyone to operate. We have various instrument and vocal preset channels for whatever is needed each week—everything is clearly laid out and ready to go.” 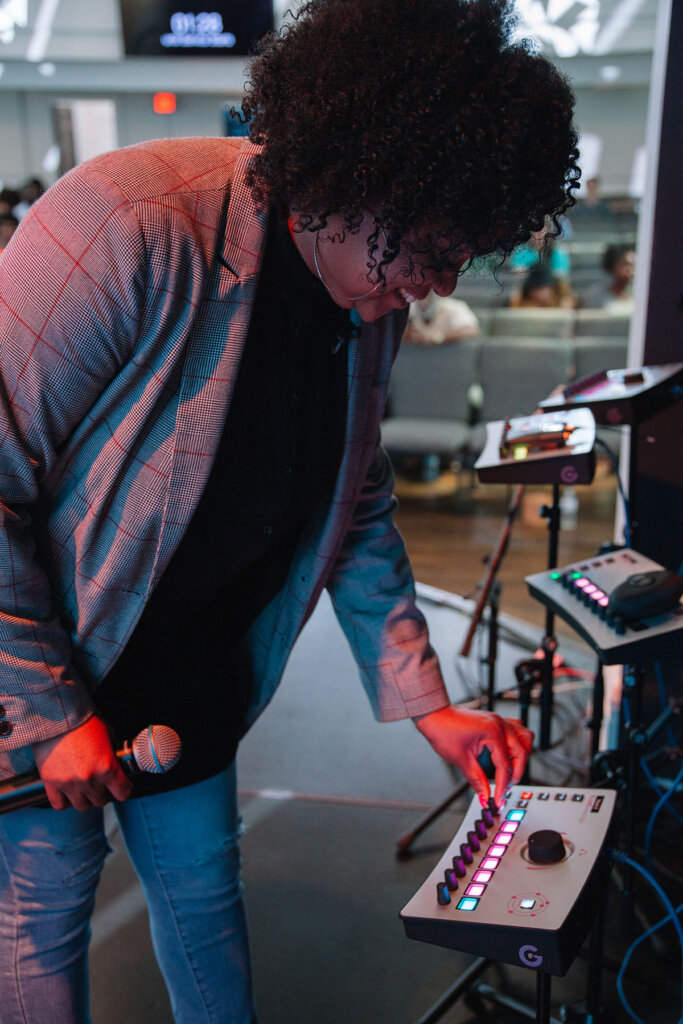 Singer Kimberly Thomas makes an adjustment to her IEM mix on one of the church’s new KLANG:kontrollers

Rick Shimer, president of Blackhawk Audio, says he’s in awe of what the Quantum225 is capable of, after installing it at Nashville Life. “This was the first time we’ve had DiGiCo on a Dante network through a DMI card, and the amount of flexibility is insane,” he says. “The Quantum console is handling four 16-channel A168Ds, a 48-channel DQ-Rack, 16 channels of stereo KLANG mixes, plus subgroups. It’s an amazing amount of I/O and it’s not even breaking a sweat.”

Smith says that he has also been integrating the Quantum Series desk’s Mustard processing into the mix. “I’m using it for group processing, as well as applying it to instruments like the drums, bass, and vocal mics, using Mustard’s unique compression and EQ to give them their own sound and color,” he explains. “DiGiCos are very transparent, so when you apply the Mustard processing, you can really hear what’s happening.”

Smith further notes that the musicians and vocalists are able to integrate the use of the KLANG:kontrollers at their own individual paces. “Some of them have already been using the immersive and 3D capabilities, while others are still getting used to doing their own personal mixes, and we have the KLANG software on the laptop at FOH, so we’re ready to step in and help if necessary,” he says. “But the flexibility is there, too—everyone can lay out the soundscape they like best, not limited by what other platforms allow, and they can save that as snapshots, ready to recall as needed. It’s a very flexible system for a very diverse church.”

For more details on Nashville Life, visit www.nashvillelifechurch.com. Blackhawk Audio can be found online at www.blackhawkaudio.com.