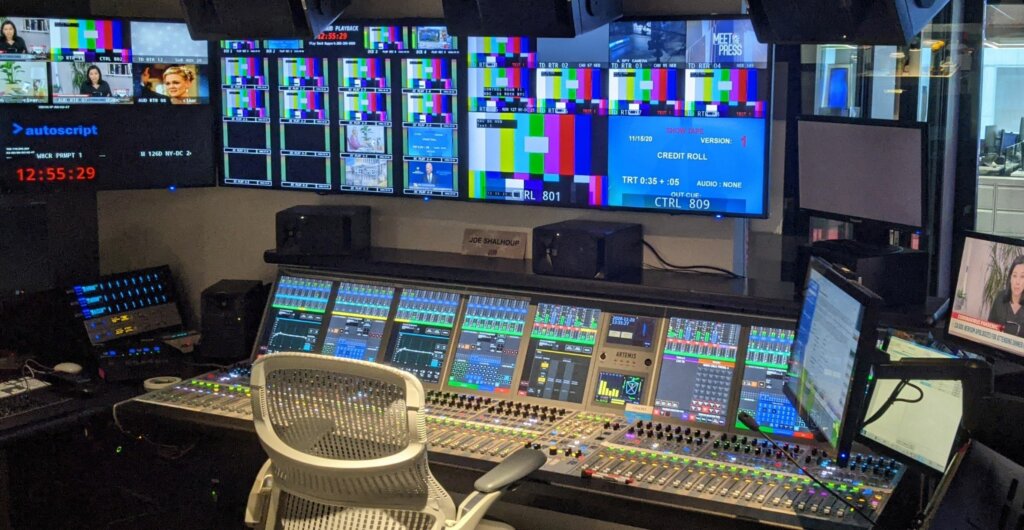 Calrec’s Artemis audio console was the ideal choice for systems integrator BeckTV for a recent control room build for a major US broadcaster. The multi-phase project involved a host of equipment for the client’s new broadcast control room, which serves as a main hub for the broadcaster in Washington DC.

BeckTV said choosing Calrec was an easy decision given its 20-year history with the company, coupled with the fact that its client was already familiar with Calrec technology having used Calrec’s popular, powerful-yet-compact Brio digital audio consoles.

Paul Nijak, Senior Systems Engineer at BeckTV, said: “I come from the OB truck world and Calrec desks are pretty much the standard. The client was already using Calrec consoles, and with the Artemis being so versatile and working effortlessly with Evertz router controls, the 64-fader desk fits the bill perfectly. Overall, this is a SMPTE 2110 and AES 67 build, but there are multiple protocols being used including Dante and MADI. Calrec has a close relationship with Evertz, allowing effortless audio signal integration with the flexibility required.”

A large number of inputs and outputs are being shared across the client’s facilities. “They have a lot of signals that come in and out from this location; this is a new hub for them and they distribute audio to their New York, Charlotte and Denver locations,” said Brendan Cline, Director of Engineering with BeckTV.

The project, which began in March 2020, was delayed due to Covid-19 but following its Covid safety protocols and with help from Calrec’s support team, BeckTV was able to complete the install several weeks prior to the Presidential Election. “Covid has meant massive setbacks for so many in the industry, but Calrec’s support and response team was really incredible throughout the entire project,” added Cline.

As a company, Calrec is continually focused on keeping broadcasters on the air no matter the situation. “Covid has certainly changed the way we do things now, though designing reliable audio consoles that get the job done has always been a pillar of our business model. Our Artemis consoles are widely used on major productions with high-profile work, and we’re incredibly pleased that BeckTV chose it for this very important customer of theirs,” said Helen Carr, Sales Manager, East Coast, Calrec.

Missed our previous posts about Calrec’s US installs?

Drop Ship Audio has expanded its Calrec roster with a new Artemis audio console which is being used by a major US network.

Here’s another update from Chris Fichera on how Group One are working with Calrec and their customers, focusing on Calrec’s ImPulse product.