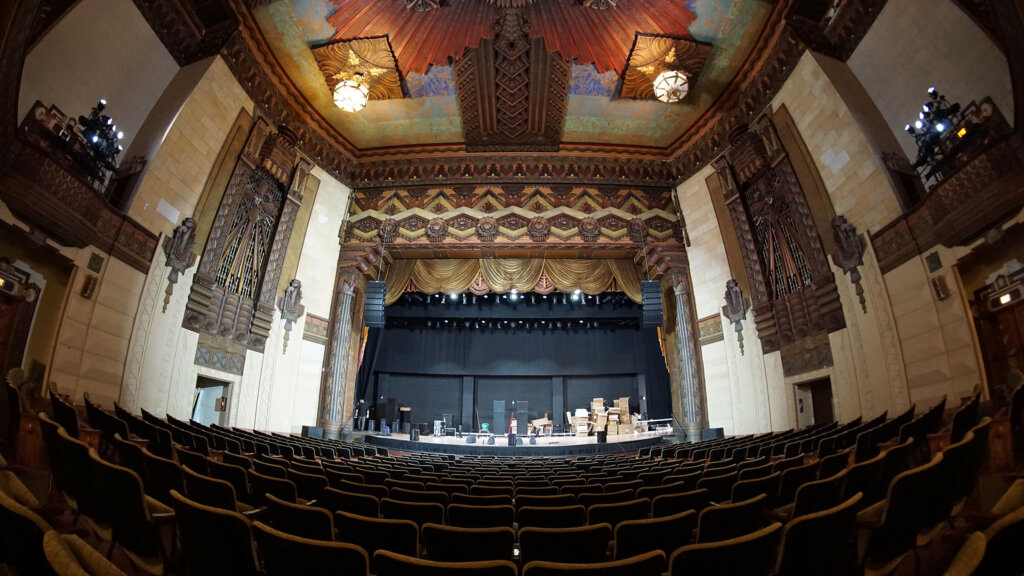 An interior view of the historic Warner Grand Theatre in San Pedro, CA

Golden Age Hollywood movie mogul Jack L. Warner called it “The Castle of Your Dreams.” The Warner Grand Theatre is the last of a series of classic Southern California Art Deco-Moderne cinema palaces from the 1930s designed by architect B. Marcus Priteca and interior designer Anthony Heinsbergen that retains its original contours.

Listed on the National Register of Historic Places, the theatre was renamed the Warner Grand Theatre in the 1980s, and in 1982 was designated as City of Los Angeles Historic Cultural-Monument #251. in 1996, the theatre was purchased by the Department of Cultural Affairs and has continously operated this landmark and Art Deco gem since that time.

Now, the 1,525-seat historic film house in San Pedro, California hosts classic and art films as well as concerts and other live performances. It’s doing that with very modern sound thanks to newly installed DiGiCo audio consoles: an SD12-96 at front of house and an SD9T for monitors, as well as an SD-Rack with Stadius 32-bit I/O mic pre’s on an Optocore HMA optical loop. These desks control a brand new VUE Audiotechnik al-8 line array sound system, all of which were installed there in July by El Segundo, CA-based Bell Event Services (BES) under the direction of Audio/Operations Manager Tim Campbell, who served as the project manager. 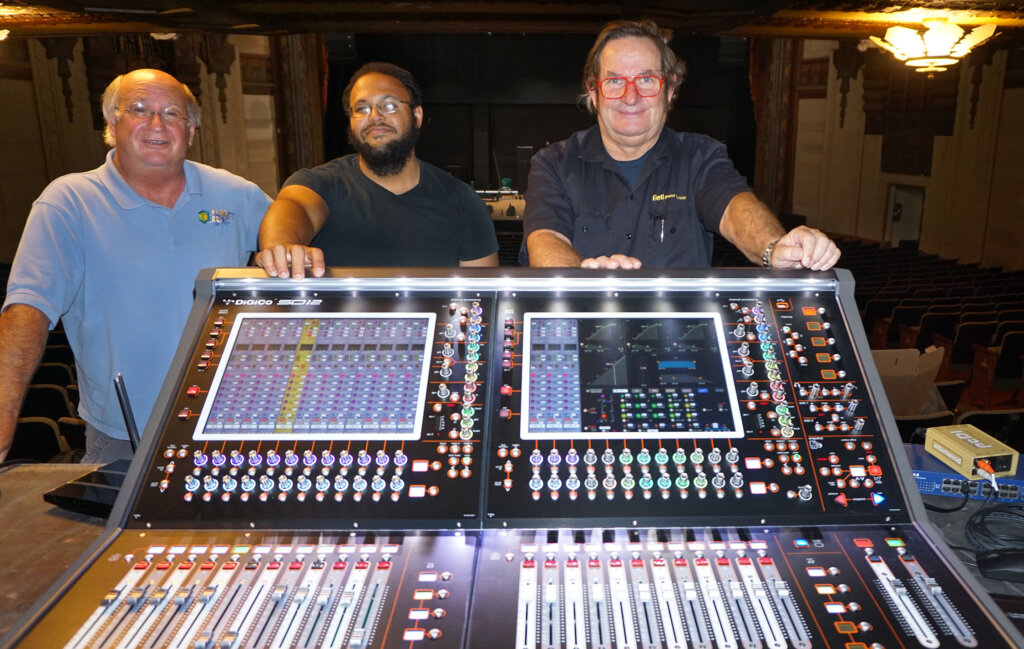 Saved from possible demolition or re-development in 1995 by a local group of preservation activists, the Warner Grand Theatre is poised to be the hub of this Los Angeles neighborhood’s renovated downtown. “The combination of the new consoles and the new PA system means that this is a world-class destination for touring shows,” states BES President Michael Bell. “That’s why the choice of DiGiCo means so much; any audio engineer in the world would be able to walk in here and be familiar with these desks and be happy to see them, because they’re such great consoles.”

In addition to their functional and operational benefits—the SD12 is supercharged with the SD12-96 upgrade, taking it from 72 to 96 channels and from 36 to 48 aux/subgroups, while the SD9T offers a redesigned “T” workflow to suit theatrical requirements—the consoles are also remarkably compact. Bell says the SD12, installed at the rear of the auditorium, takes up far less space than the previous FOH desk. “They would be able to add more seats as a result, for increased show revenue or social distancing purposes,” he says. “And the SD9T has a really small footprint. We have it installed on the stage, but it can be easily moved around, repositioned based on whether it’s being used as the monitor mixer for a musical concert or a theatrical performance at the front-of-house position. These are the perfect consoles for this room for a number of reasons.”

Victor Prudeaux wears many hats: at the Warner Grand Theatre he is both its front-of-house mixer as well as its master electrician, and he mixes and consults at various other venues and stages in the Los Angeles area. Thus, he was well positioned to know what he wanted for the renovated Warner Grand Theatre, and he wanted DiGiCo. “I have worked on every digital console under the sun and nothing compares to DiGiCo sound quality and functionality,” he proclaims. “It’s simply the best there is.” 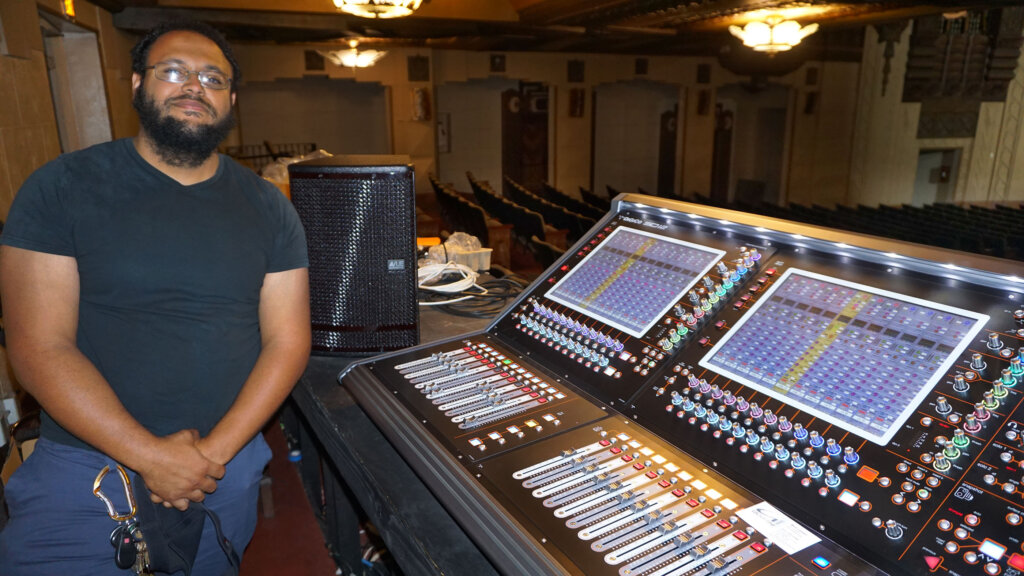 Prudeaux says the SD12-96 is an excellent all-round FOH console for any venue because of its ability to tailor its workflow to meet that of the operator and the moment. “With DiGiCo, I’m not tied down by a set workflow,” he says. “I don’t have to scroll through a thousand pages to get to the one I need.”

He finds the SD9T equally praiseworthy. “We do a lot of theater here, and the SD9T’s theatrical software’s snapshot function means that if an understudy has to suddenly go on, I can just select the understudy in the Player feature, and the all of the custom settings and processing we’ve previously edited and saved for that character’s replacement actor are there,” he says. “I don’t have to rebuild an entire show like I have to on other consoles, and we’re ready to go within moments.”

Finally, Prudeaux says the Stadius 32-bit preamps in the DiGiCo SD-Rack will allow for enhanced speech intelligibility and clarity for theatrical performances. “And every show that comes through here, concerts or theater productions, will find the same consoles they likely carry on the road—DiGiCo—which works to make us a preferred destination for shows,” he says. “That’s a lot of good reasons to go DiGiCo.”

The Warner Grand Theatre, which was declared a historical and cultural monument of the city in 1982 and added to the National Register of Historic Places, is getting ready for its next 90 years, with upgraded projectors next on the list of planned enhancements. “When touring comes back, the Warner Grand is going to be a real showcase room, thanks to the DiGiCo consoles,” says Bell.

For more details on the Warner Grand Theatre, visit www.grandvision.org. Bell Event Services can likewise be found online at www.belleventservices.com.