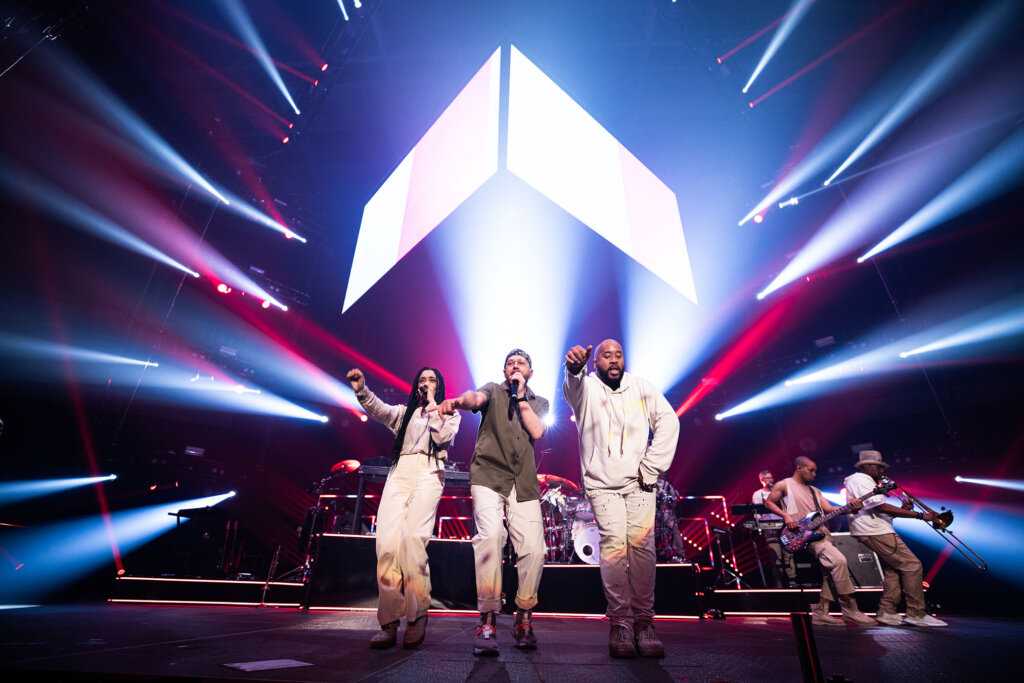 Toby McKeehan (center) and his DiverseCity Band in concert

Although TobyMac’s Hits Deep Tour has been an annual late-winter tradition for a number of years now, this year’s trek was particularly joyous as it represented one of North America’s first proper arena tours following the pandemic blackout year. True to form, Nashville-based Blackhawk Audio, the longtime touring sound provider for the seven-time Grammy Award-winning Christian hip-hop/pop artist, carried DiGiCo consoles—SD10s at both FOH and monitors, plus a smaller-format SD9 support desk at FOH—which were used to mix 18 arena shows in 13 cities during February and March.

In addition to TobyMac, the 2021 Hits Deep Tour featured a full lineup of special guests, including Tauren Wells, We Are Messengers, Unspoken, Cochren & Co., and Terrian. All of the supports acts performed each night in a seamless awards-show format, bouncing between the main stage and a B stage located at FOH, with Toby McKeehan and his DiverseCity Band wrapping up as the headliner. 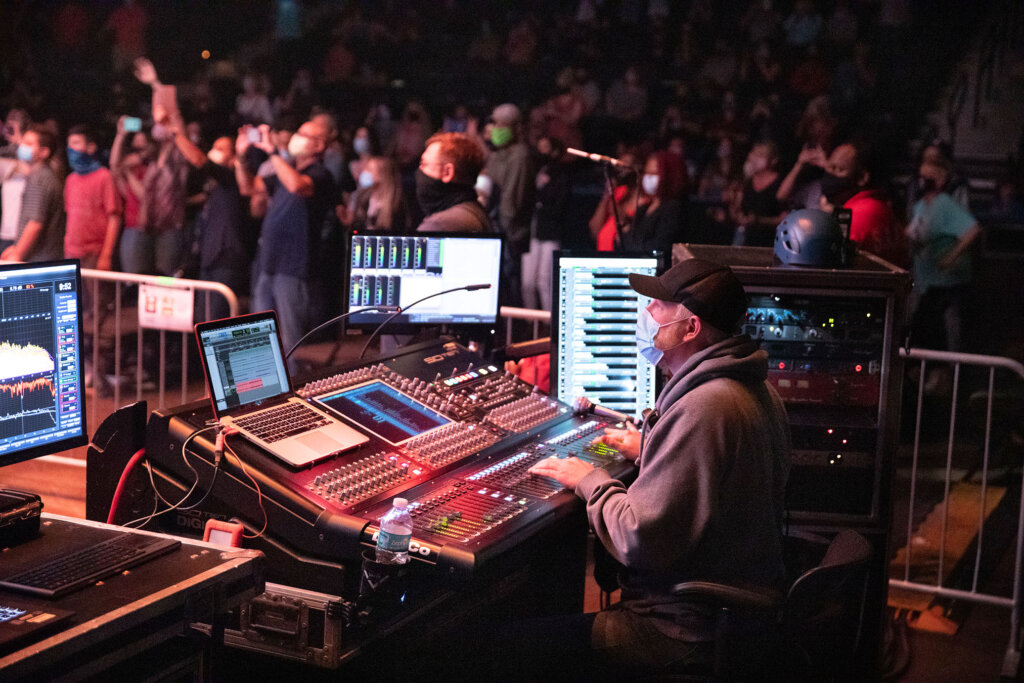 Although venue seating capacities varied a bit, FOH Engineer Pat Haapanen notes that nearly all of the shows “sold out” at approximately a third of each arena’s original capacity, and every section was open for sale, including behind the stage in some venues. Floor seating was set up in “pods” with sufficient distancing between them, and the stands were typically taped off or blocked in some way. “Although it was kind of different seeing so many empty seats in the stands and spacing on the floor, the crowd energy was very much ‘business as usual,’ which was really exciting to experience again,” he says.

First working with TobyMac in 2015 as a Blackhawk Audio system engineer, Haapanen has been manning the artist’s FOH mix since 2018. “I started on DiGiCo pretty early when I joined the Blackhawk team, and my first touring experience with Toby was on the SD10,” he recalls. “Although I had previously mixed on other console brands, DiGiCo is definitely my favorite now, not only for its fantastic sound quality, but also its adaptability and configurability. I’ve been able to get behind most of the SD line—the 5, 7, 9, 10 and 12—and have used them on many different types of gigs, from corporate meetings and conferences to award shows, all of which have performed great.” 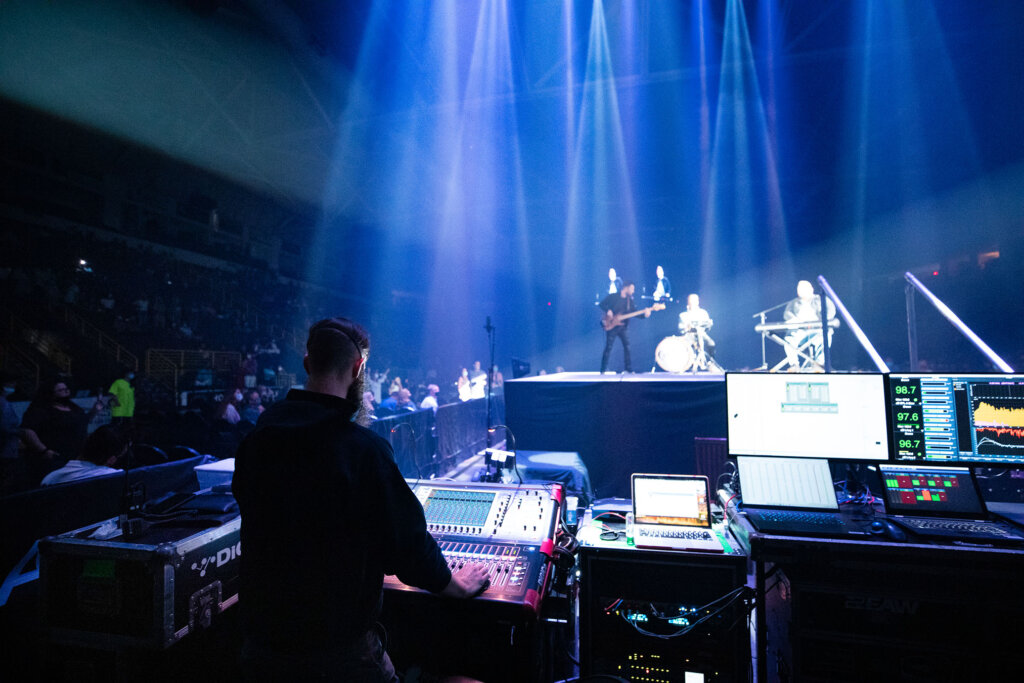 For the 2021 Hits Deep Tour, Haapanen and Monitor Engineer Heath Mahon each worked on an SD10 desk deployed at their respective mix positions, while an SD9 production console located at FOH additionally accommodated the two smaller B-stage acts’ FOH and monitor mixes. “The SD9 handles all of the pre-show videos/music, emcee, and transition videos. We have almost always had something in that role, except in 2017, when we did it all on the two SD10s. Having the extra desk really helps alleviate the workload for the SD10 and allows guest engineers to have their own files and be able to hit a quick line check before they play.”

Haapanen calls out the SD10’s customized layouts, macros, matrix mixer, and fiber optics as a few of his favorite amenities. “I really like the way you can lay out the desk in any way that the operator wants, and it’s really easy to move things around, which is nice for adapting previous files, or when you change your mind part of the way through a gig. I’ve really gotten to lean on macros more and more as well, using them for triggering effects, firing snapshots, and viewing certain banks and plugins, as well as fun stuff like brightening and dimming the lights, which is actually pretty handy for outdoor shows. The SD matrix mixer is one of the easiest and most versatile I’ve used. I use it for routing talkbacks/com to various places, group mixes to PA or Rec outputs, and solo bus routing. And the Optocore network is a big plus for us as well—not only for the redundant communication to the tour’s three SD-Racks, but also for super-easy console-to-console routing. There are typically a few inputs that Heath and I send back and forth to each other that way.”

The FOH engineer runs a Waves setup on Toby’s show, as well as a TC2290 and Lexicon PCM90. “I do use the onboard channel strip elements on most inputs as the primary, and use Waves on some other channels. All of my primary delays and ’verbs are onboard—the two outboard units are mostly for fun, kind-of-obnoxious-type effects during the show. As far as plugins go, I like to use the F6 or C6 on vocals to really dial in with their dynamic EQ and multiband compression. I also use some of Waves’ distortion and doubler plugins for some vocal effects, as well as the API for bus compression.” 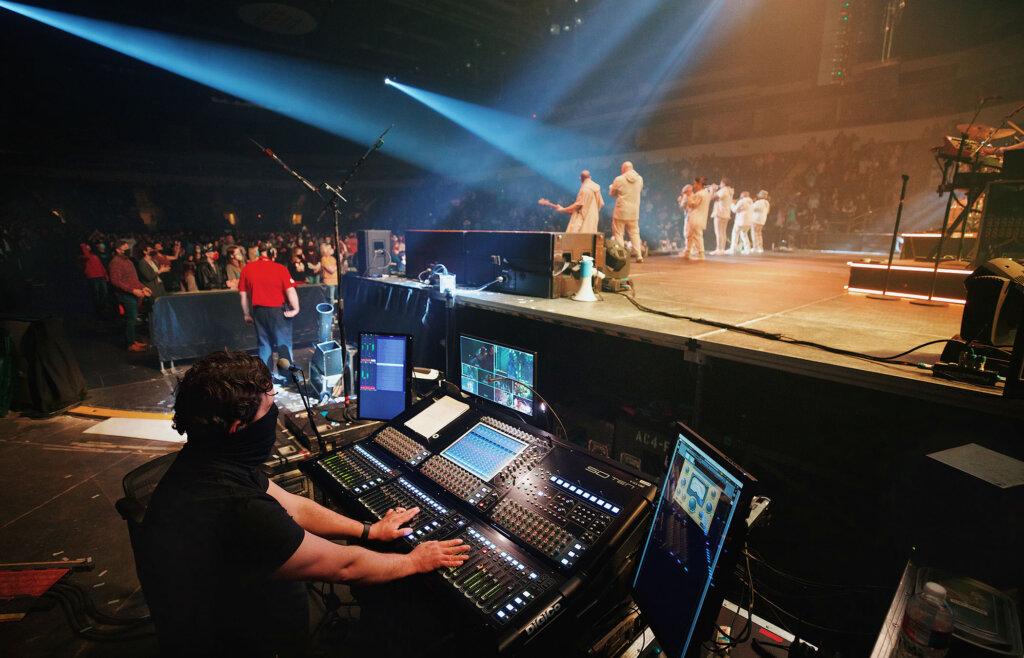 On the other end of the Optocore loop, Monitor Engineer Heath Mahon runs 12 sets of stereo IEMs, a stereo sidefill mix, and two separate wedge mixes. “Including Toby, I have nine performers on stage, six instrumentalists, two background singers, and one guest vocalist,” describes Mahon. “The opening acts playing the main stage average about five musicians, and they all love the mixes that monitor engineer Wil Thornton is giving them.”

First introduced to DiGiCo via a D5 Live years ago, Mahon has worked with TobyMac for nearly a dozen years, and the SD10 has been his worksurface choice for more than half of them. “I’m very active when I mix, and I like having three banks of faders, so smaller-format desks tend to not work as well for me. The size of the SD10 isn’t huge, but it gives me everything I need to get my job done well. I’m using a lot of both the Dynamic EQ and Multiband Compressors on many channels. I appreciate both the accessibility and ease of use that having those on the desk give me.”

“I still like to treat my SD10 like it’s an analog console, and having encoders on every channel strip gives me easy access to make changes without having to switch to flip to faders. I make small changes throughout the show and having multiple ways to get around and make changes is very important for me. Another thing that sets SD desks apart are the macros. Digital consoles tend to have a way of being hard to get around on, and having those to speed up my workflow is a major part of what I love about DiGiCo.” 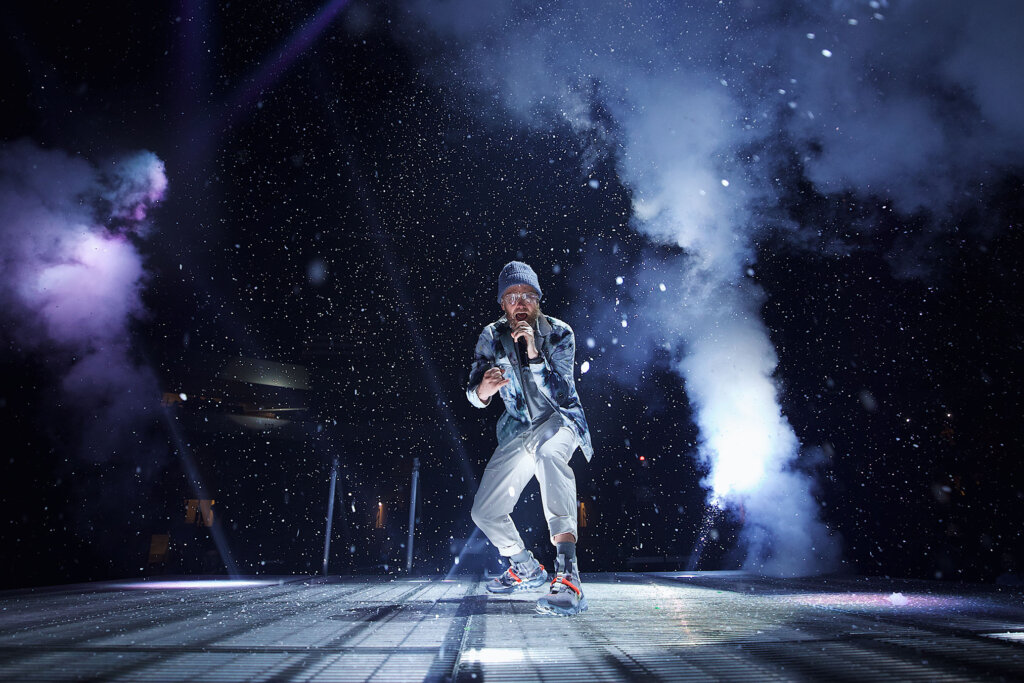 Haapanen notes that they multitrack record most nights for virtual playback, or if someone needs stems for something. “That’s actually handled in monitor world,” he says. “Heath and I are set up on a standalone network just for playback via Waves Tracks Live and two DiGiGrid MGB coaxial MADI interfaces. The tracking computer plays back to both monitors and front of house simultaneously, which is very handy and works really well.”

One of the additional joys of being on the DiGiCo platform, according to Haapanen, is that even the older SD-Range consoles continually provide creative new solutions. “For me, every year I’m on the SD10, I either discover something new, or something new gets added that I can put into use, which is great! This year, for instance, I am using the console to fire MIDI to my outboard effects, changing presets for me. I’ve played with having timecode fire the first song of the night, so when the track starts, it’ll fire that snap and I know the band is ready. It’s thoughtful details like that that have made me a dedicated fan of DiGiCo. I can’t imagine mixing on anything else.”

Although the 2021 Hits Deep Tour has now come to a close, TobyMac is showing no sign of slowing down. He is currently out on a new leg of outdoor Drive-In Theater Tour shows running through mid-May. In June and August, the artist will be playing both one-off shows and festival dates, before heading back out for another arena and theater run in October and November. For more details on his upcoming tour stops, visit www.tobymac.com/tour.

Blackhawk Audio can be found online at www.blackhawkaudio.com.

Giveaway included new and noteworthy products from DiGiCo, KLANG and DiGiGrid In late-January, DiGiCo announced the premise of its New…