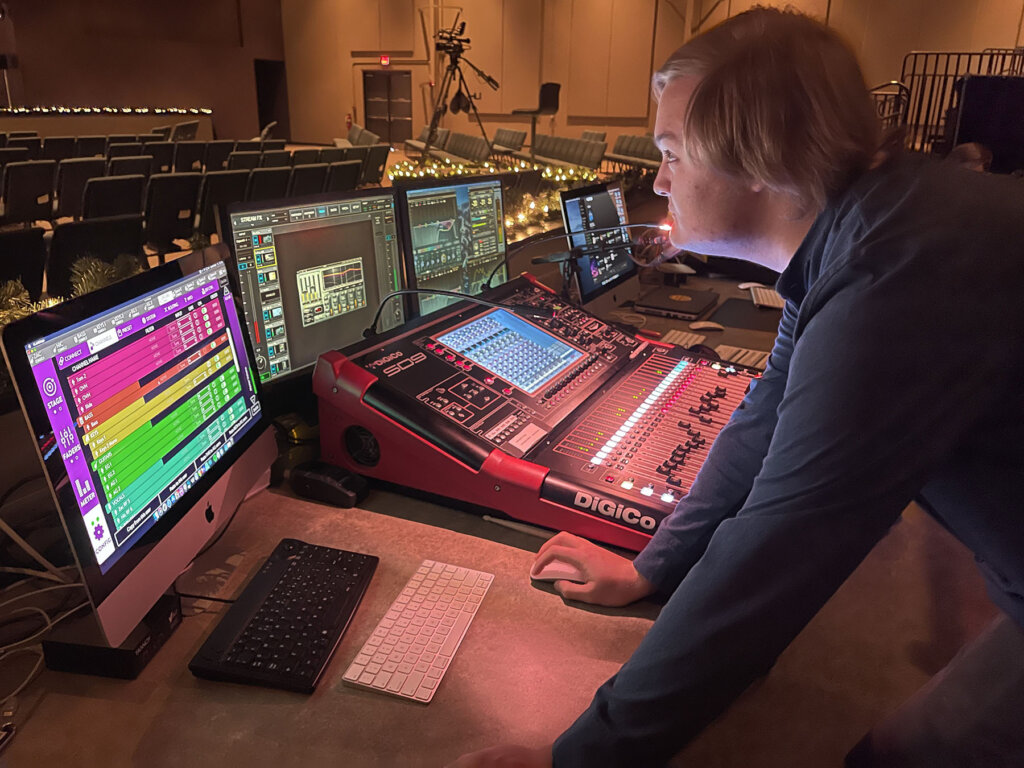 Lakewood Baptist Church in Gainesville, Georgia has purchased two KLANG:fabrik immersive IEM mixing systems for use in its main worship sanctuary. The units were acquired through Production/Co, the Chestnut Mountain, GA-based AV systems integrator, which also installed the system earlier this year, readying it for when the church resumed live capacity-limited and socially distanced services last June. Together, the KLANG:fabrik units provide a total of 32 inputs and 12 individual immersive IEM mixes for the church’s band members, connected through Lakewood’s existing DiGiCo SD9 FOH console.

“They had taken their existing in-ear monitoring solution as far as it could go—they needed a more flexible and sophisticated IEM solution, and the KLANG:fabrik was it,” says Cason Cleveland, owner of Production/Co. KLANG:fabrik is “flexible” thanks to its broad compatibility with widely used audio interfaces, including MADI and Dante, and the ability to use the KLANG:app on any device (iOS, Android, Windows or Mac), or control KLANG by using the DiGiCo integration into SD-Range and Quantum consoles. And “sophisticated” because of the immersive environment that up to 16 individual musicians can create for themselves on stage via each KLANG:fabrik’s high-performance processors, all without any noticeable latency. 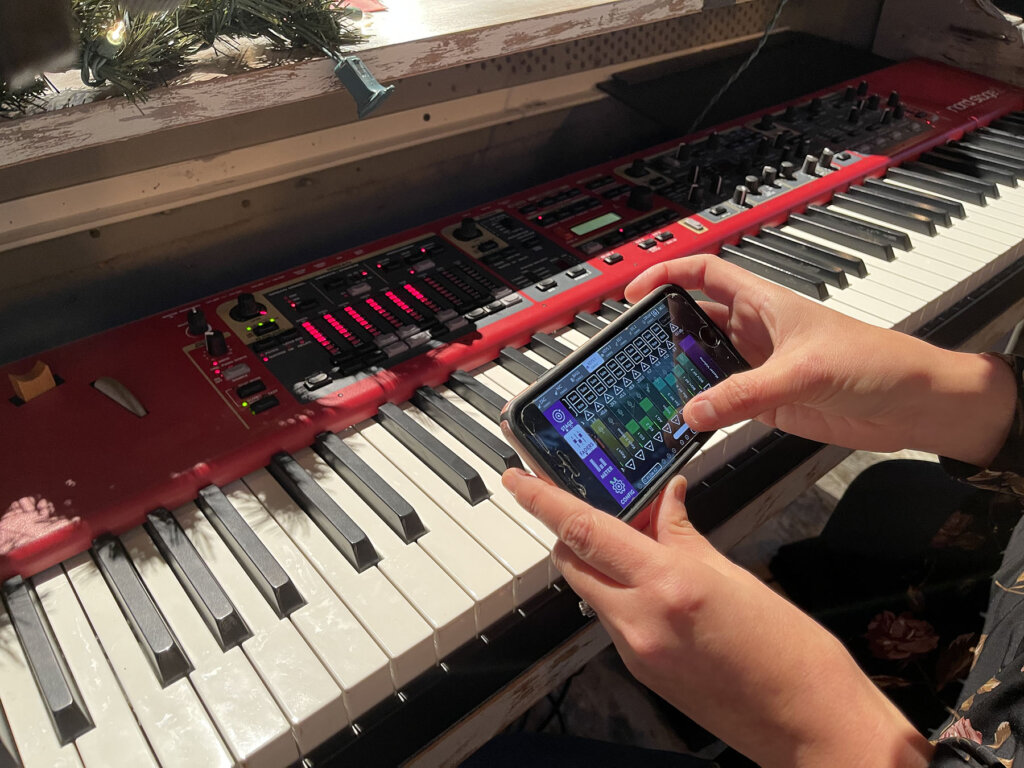 Lakewood Music Institute Director/Keyboardist Kim Stice makes a quick adjustment to her IEM mix via KLANG:app on her phone

“The ability for the musicians on stage to completely control their own mixes was important, because the church often relies on volunteers to mix services,” adds Cleveland. “Each musician having their own app onstage means that monitoring is one less thing the front-of-house mixer has to worry about, allowing them to focus on making the house sound as good as it can be.”

Cleveland says the SD9’s own intrinsic routing flexibility was of assistance here: he was able to assign a feed from the inputs from the stage to the KLANG units through the console, connected via MADI, giving the stage every input needed to create local mixes. “We just copied the input assignments internally on the SD9 and assigned that to the KLANG:fabrik units—it was that simple,” he explains. “It was also very helpful that we could set the KLANG units up as completely separate systems from the rest of the audio system. As a result, we can apply processing such as EQ individually, as well.” 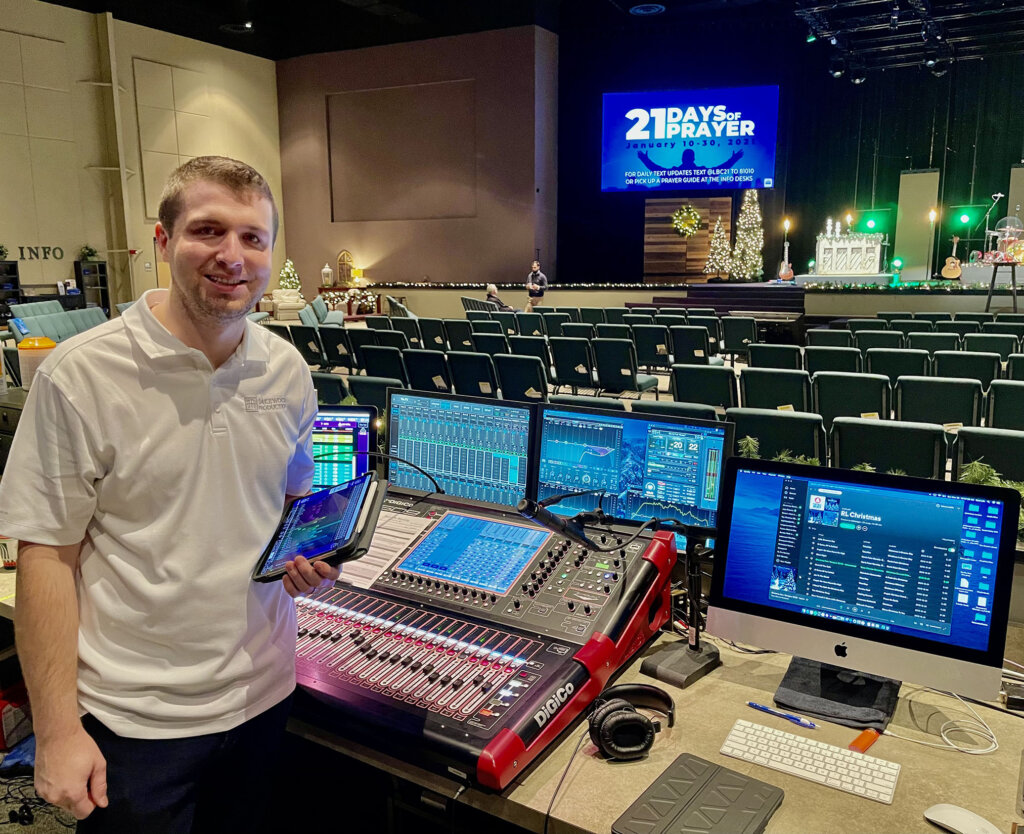 Lakewood Baptist Church Technical Director Coltyn Cooley agrees with those points and adds some of this own. “With the KLANG system, we more than doubled our monitoring channel count and as a result we’re able to give everyone on stage the ability to build complete mixes in their ears,” he says, referring to the eight to ten musicians who perform for each service. “For instance, the drummer now has individual channels for kick, snare and other instruments, whereas before we could only give him a submix. Now each vocal has its own mix; before, we used to have to gang up the vocals. Then put the immersive technology on top of that and they are having their minds blown on stage! They love it.”

Cooley, who was introduced to the possibility of KLANG by Cleveland and who was sold on it after reading numerous case studies online, adds that the KLANG:fabrik has literally given the church musicians a new perspective on themselves. “We know it sounds good out here, but now they can hear just how good it sounds on stage,” he says. 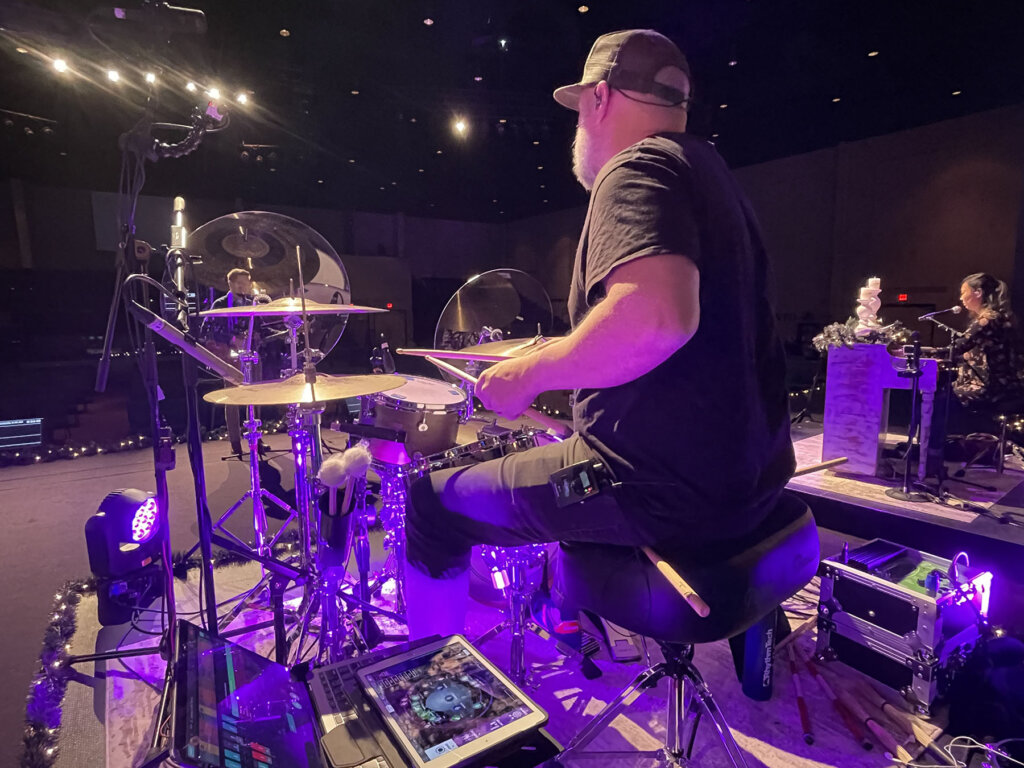 Cleveland says the church’s musicians, worship pastors, and audio team have all been impressed by KLANG:fabrik’s performance. “The ability it gives them to spread out the mix and have better defined and detailed sound on stage means individual instruments don’t have to be as loud, which keeps overall volume better under control, another way KLANG:fabrik makes the front-of-house engineer’s job easier and also preserves the musicians’ hearing,” he says.

And there’s also a substantial economic case to be made for the KLANG:fabrik, Cleveland adds: “It is a bit more expensive than some other, less-sophisticated systems on the market, but when you factor in that it completely eliminates the need for a second console for monitors and someone to run it, it actually ends up saving money. Those are some pretty compelling arguments.”

For more information on Lakewood Baptist Church, visit www.lakewoodlife.org. Production/Co can be found online at www.productionco.com.