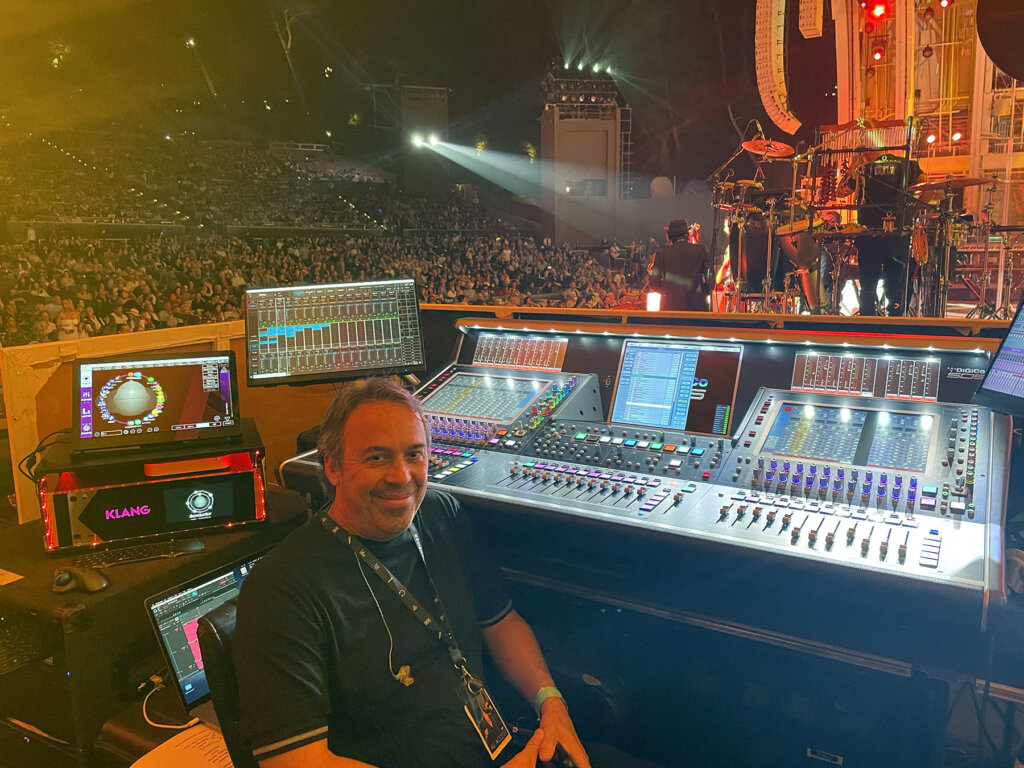 Ricky Martin’s monitor engineer, César Benítez, seated at his DiGiCo Quantum5 console with the KLANG:konductor racked behind him

Last year, César Benítez Seilhamer became a fan of KLANG’s unique approach to immersive in-ear monitor mixing on a co-headlining tour with Latino superstars Ricky Martin and Enrique Iglesias, using a DMI–KLANG card mounted into one of the slots on the back panel of his DiGiCo Quantum5 console. And the shows keep getting bigger—Martin is doing a series of one-off orchestral dates this year, including two recent nights at the Hollywood Bowl with the 100-plus-member Los Angeles Philharmonic Orchestra in July—but Benítez has a new way to keep up with that, as well as giving the artists and musicians the most effective sonic environments possible on stage. His solution is the new KLANG:konductor, the most powerful and versatile immersive in-ear mixing processor ever. Able to deliver 16 immersive mixes and process 128 input signals at up to 96kHz at an astonishing internal latency of less than 0.25ms, the KLANG:konductor gives Benítez the tools and power he needs now and in the future.

“The shows I was working on kept getting larger,” says Benítez, who began his stint with Ricky Martin doing awards shows, which led to the 27 dates on the 2021 tour with Iglesias, named Pollstar’s number-one Latin tour, as well on shows with singer/songwriter/producer Tommy Torres and Wisin & Yandel, with whom he’s currently on tour and who will later have 14 shows at the Puerto Rico Arena in December. “As the shows became more complex, I needed a new monitor mix solution. The KLANG:konductor was it—it’s not only what I need now but it’s also the future of monitor mixing for everyone.” 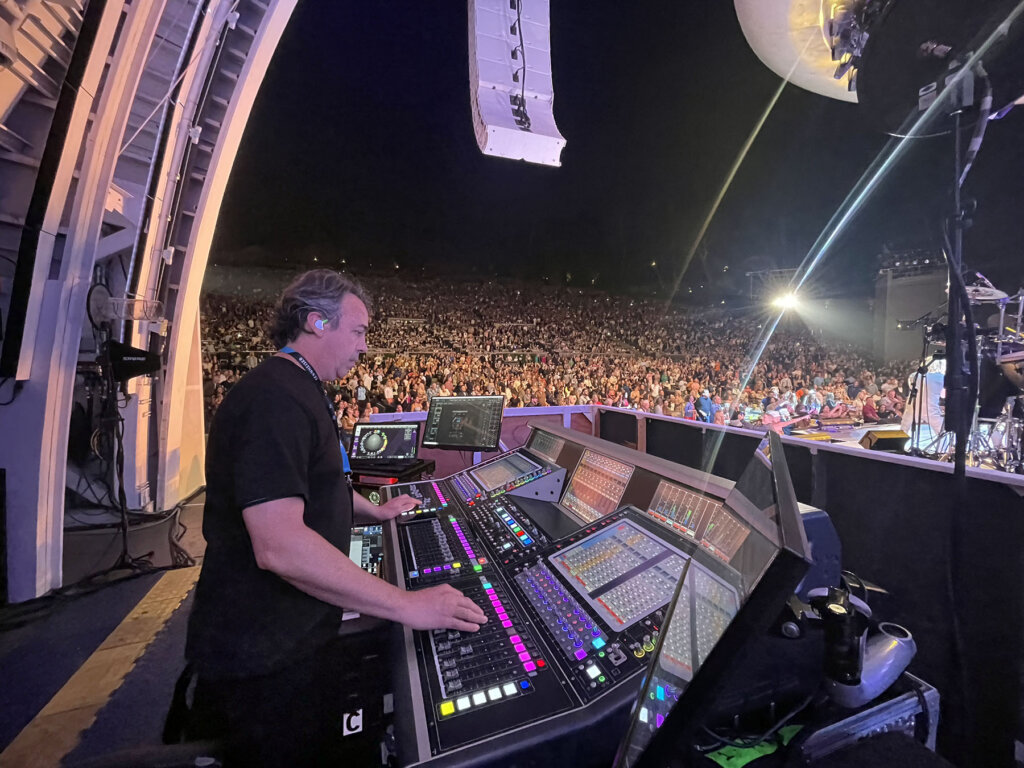 Benítez is using the KLANG:konductor fairly conventionally for now, doing the mixes for each musician on stage from the console and the KLANG:konductor’s front-mounted seven-inch color touch display, which allows for direct mix control, audio setup, routing, and metering. “It will take some time and training before all of the musicians are ready to do their own mixes onstage, so I’m doing the mixes in the KLANG processor now,” he explains. “But they are all already totally into the immersive-audio aspect of the KLANG:konductor, which is connected to the console via MADI. They love it. Once they’ve experienced immersive sound, stereo is no longer enough. They have this space around them that gives them a tremendous amount of creative freedom. They tell me it’s like they’re not using in-ear monitors at all, but just hearing the music in the space around them.” 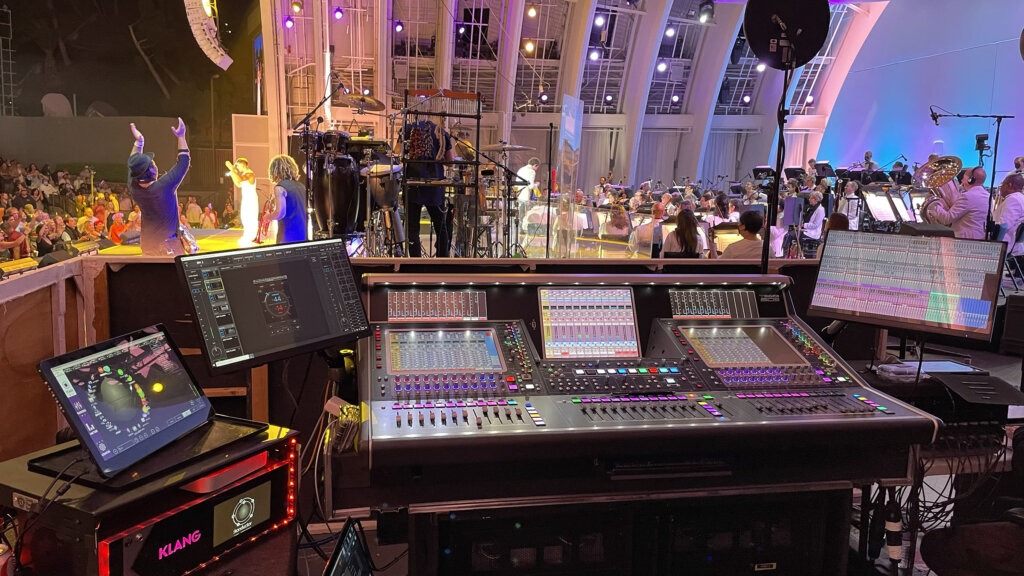 But the best part for him, says Benítez, is the freedom he gets from all those discrete channels. “There are 128 channels available and we’re using 106 every night with Ricky, the band, and the orchestra,” he says. “Every feed every night from every show is available, and all of it goes through the immersive processor with virtually no latency. That also means the overall volume of the in-ear mixes can go down, which is the magic of KLANG—that you get a better mix and protect your hearing. Plus, the seamless integration with DiGiCo consoles”—he’s used the KLANG:konductor with a Quantum5, an SD7 and an SD10 so far—“gives me direct control and makes the entire process so much easier. I really do believe that KLANG is the future of monitor mixing.” 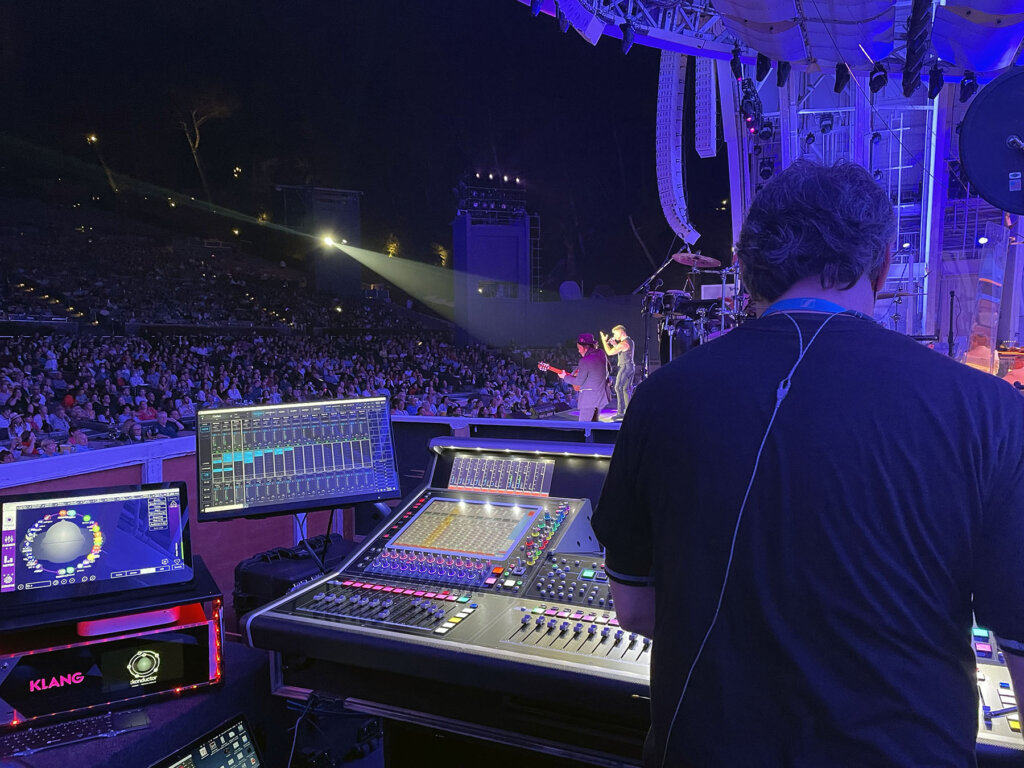 The monitor engineer’s new KLANG:konductor (lower left) is accommodating 106 of 128 available channels between Ricky, the band, and the orchestra, and processing those feeds with virtually no latency

KLANG Makes it Personal with New Immersive Kontroller for Musicians

KLANG:technologies has announced the combined release of its new KLANG:kontroller, a hardware controller that is compatible with all KLANG immersive…