Paired with a DiGiCo SD12 96 console at FOH, two KLANG:fabrik offer user-friendliness, flexibility and fantastic audio quality while eliminating the need for a monitor desk 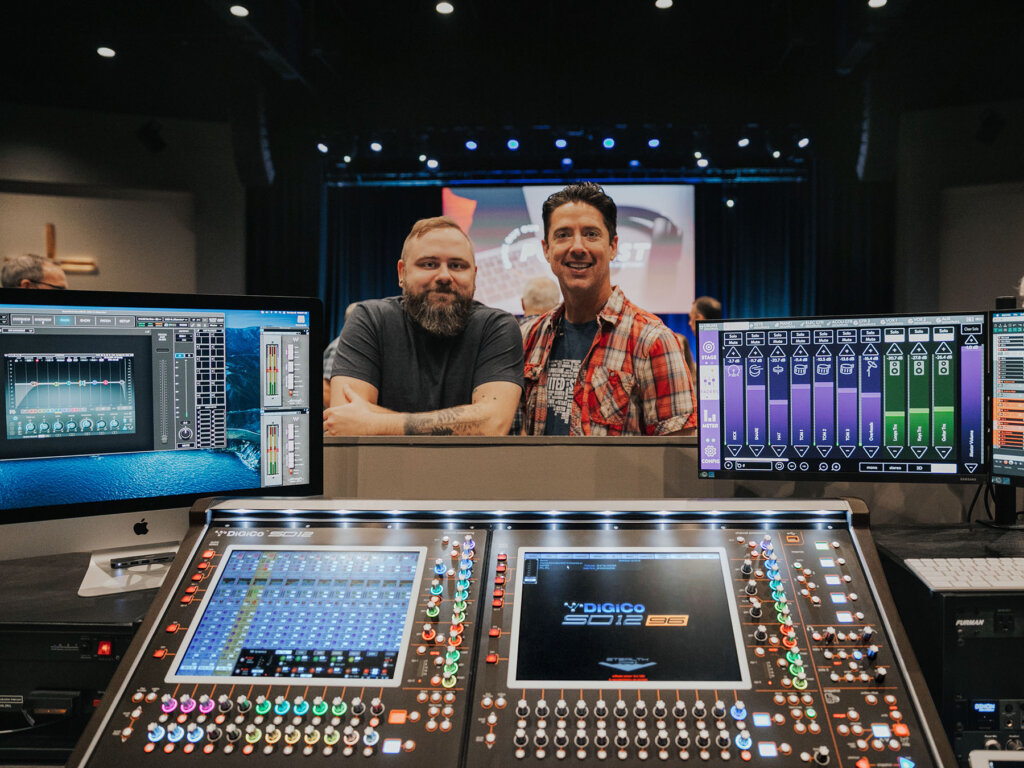 When Watkinsville First Baptist Church (WFBC) finally celebrated the opening of its 31,000-square-foot sanctuary built on nearly 18 acres in its Athens, Georgia suburb, worshipers began flocking to the new 1,200-seat auditorium to hear Pastor Carlos Sibley’s messages and sing along with the church’s 10-member Contemporary worship team. Understandably then, the centerpiece of the new sanctuary is its audio system, which uses a DiGiCo SD12 96 console to mix house sound and which, in turn, feeds a KLANG:fabrik in-ear monitor mixing system for the band, its vocalists, and pastors. The KLANG and DiGiCo systems were purchased through and integrated by Spectrum Sound of Nashville, which also installed a d&b PA system there.

“The KLANG:fabrik is just amazing,” says WFBC Production Director Matt Hellems, who often mixes house sound for the church’s two Sunday services. “We run it as kind of a hybrid; it’s not a separate console or worksurface, but we’re also not using the auxes on the SD12. Instead, we take a split from the console and send that over Dante to two KLANG:fabrik units onstage, where we have ten channels of Shure PSM 1000 in-ears. The musicians download the app, we give them the password, and everything’s ready to go. It’s totally plug and play, and they all love it.” 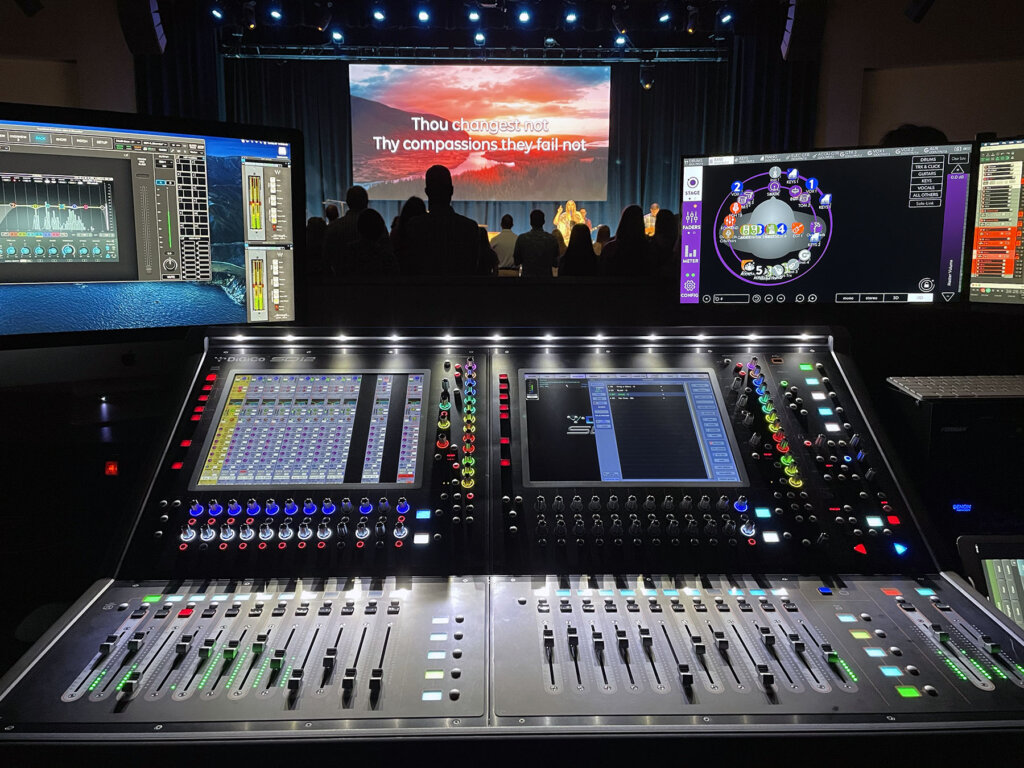 WFBC Worship Pastor Jason Dominey compliments the KLANG:fabrik on its user friendliness. “I feel like its target market is people who are not audio engineers because everyone can easily build the mixes they want for themselves onstage,” he explains, adding that this both makes the musicians and vocalists feel more empowered about their sound and performance, and takes the onus of mixing monitors off of the FOH engineer while also eliminating a second console for monitors. “Before, that is the way we did it—separate consoles for front-of-house and monitors—and we still have those consoles in other parts of the campus. But the KLANG:fabrik and SD12 represent a ‘next step’ for us in terms of audio. I remember the first time I heard a demo of the KLANG system and I thought, ‘This is fantastic,’ especially for any church or organization that has to rely to some extent on volunteers to run their systems.”

Hellems says the combination of the KLANG:fabrik and the SD12 96 does indeed represent an inflection point for Watkinsville First Baptist Church’s audio. “DiGiCo was a pioneer in bringing live sound into the digital domain, and the SD-Range took digital away from that one-to-one mindset of analog to letting anything be what you want it to be,” he says. “It’s the flexibility of the console’s operation that makes it as powerful as it is. And having the KLANG:fabrik integrated with it just increases that power and flexibility.” 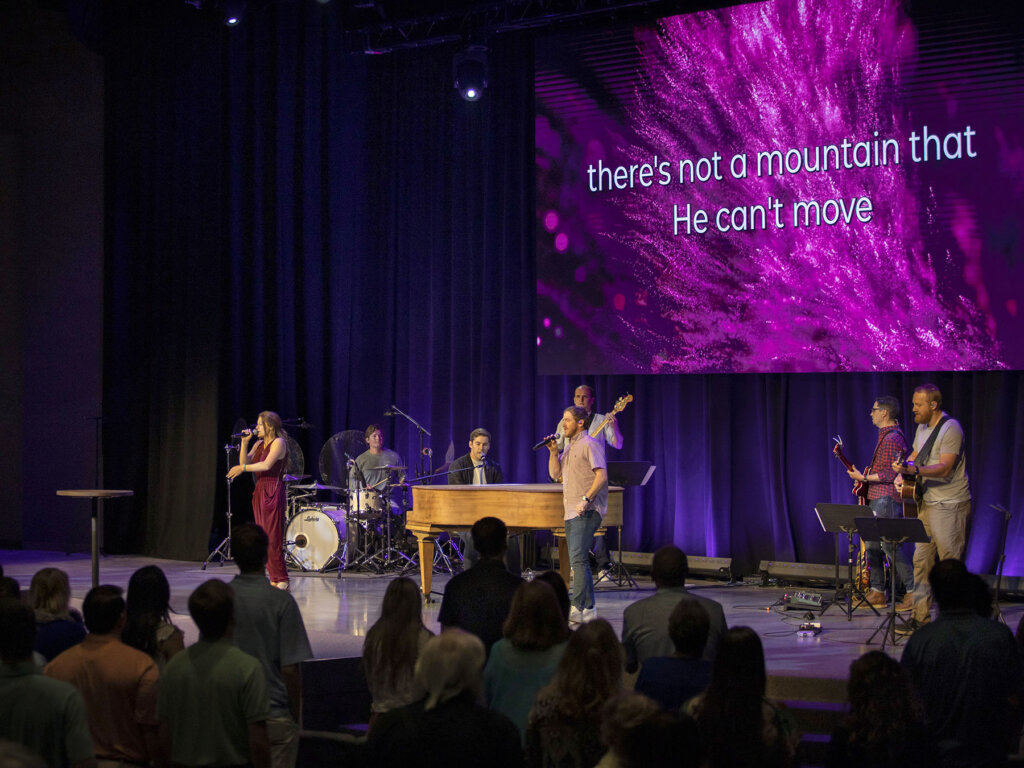 He says that he looks forward to applying KLANG to a wider range of uses, such as Christmas and Easter celebrations, local school graduations, music concerts, and other special events that had been curtailed there by the pandemic. “I know the immersive aspect of the KLANG:fabrik monitoring brings a new kind of experience to musicians and singers onstage, and I believe that’s going to make the experience of hearing them play even more enjoyable—both for them and our audiences.”

KLANG Brings Joy to the Stage at Broadmoor Baptist Church

A pair of KLANG:vokal immersive in-ear monitor mixing processors paired with a dozen KLANG:kontrollers create an easily managed but individually…

Celebrating its 75th anniversary, the church recently had Clark Integrated Solutions equip its sanctuary with new audio facilities, including KLANG’s…

The new immersive in-ear monitoring processor has further streamlined the workflow for the growing Tucson-area church, increasing its monitor input…