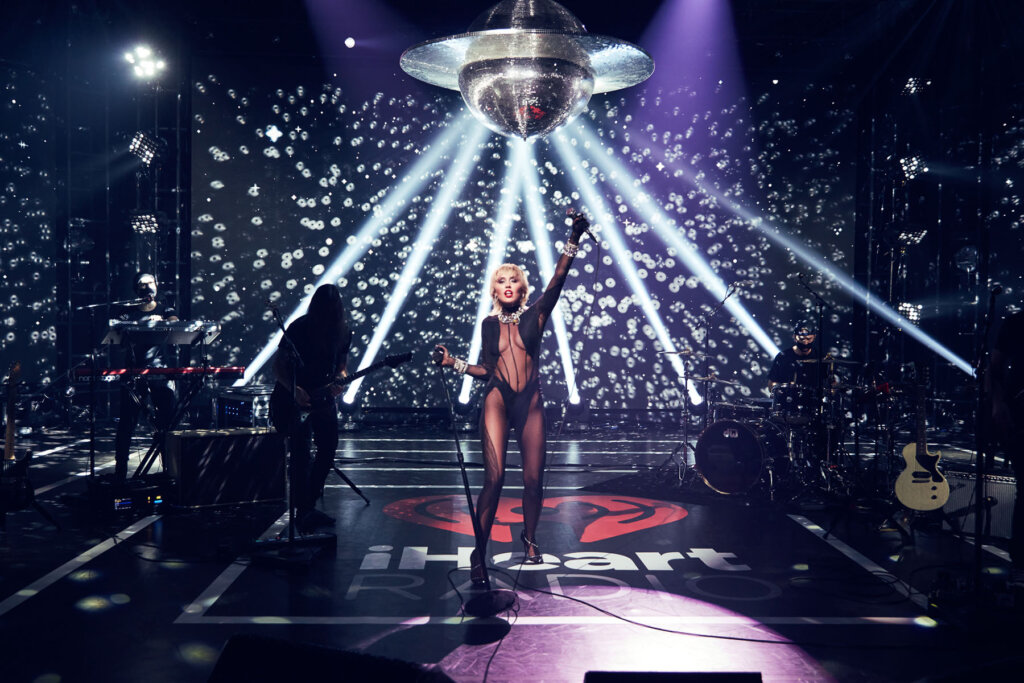 The tenth annual iHeartRadio Music Festival, a two-day virtual streaming, radio and TV broadcast event in late September, featured a lineup of international chart-topping artists performing live in front of a virtual audience, including Alicia Keys, Bon Jovi, BTS, Coldplay, Kane Brown with special guests Khalid and Swae Lee, Keith Urban, Migos, Miley Cyrus, Thomas Rhett with Jon Pardi, Usher and others. The festival also marked the debut of the recently introduced DiGiCo Quantum338 digital mixing console, along with a new DiGiCo SD12 mixing console, at the iHeartRadio Theater Los Angeles in Burbank, California, where many of the artists recorded their performances in the lead up to the festival’s air date.

Jason Batuyong, the venue’s head of audio for the past year, has worked at iHeartRadio Theater Los Angeles since the 20,000-square-foot space—formerly NBC Studios and home to The Tonight Show with Jay Leno—opened at the Burbank Studios in 2013. He reports that the two-console upgrade has significantly improved the setup process at the venue. The original sound system installation, on which Batuyong also worked, was performed by ATK Audiotek, and included digital desks that, while rider-friendly, were of a previous generation of technology, he says. 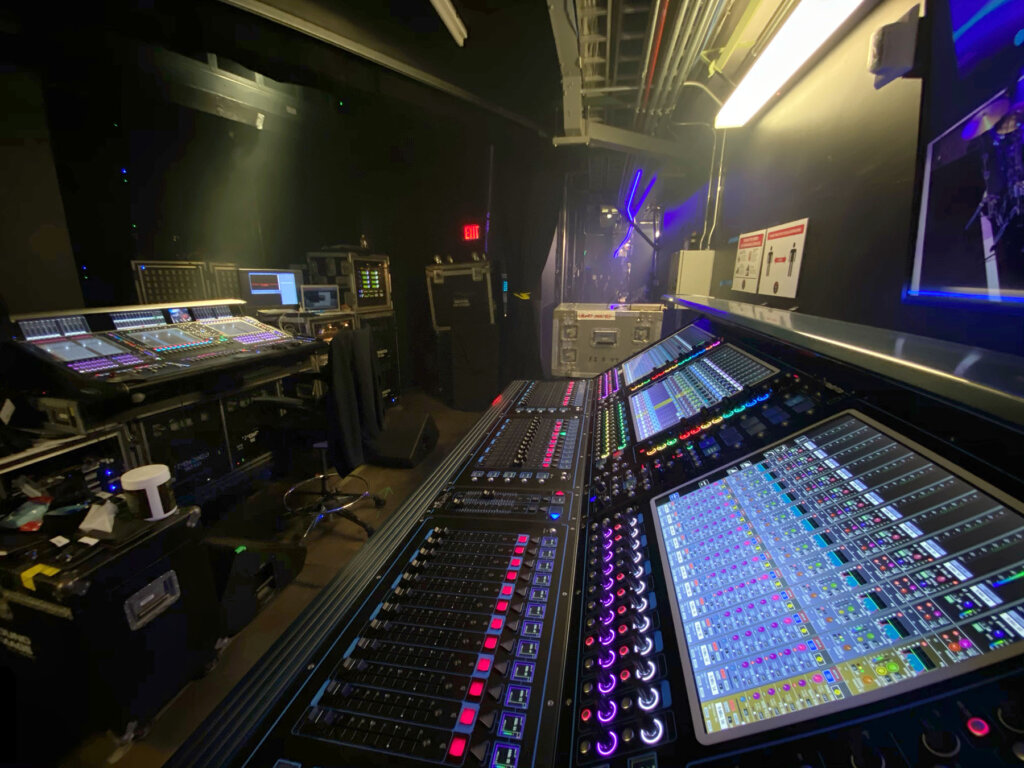 “Most of the time acts would bring in their own tour package desks or rent them in for their shows. The idea was to streamline everything and make it easier for artists to not have to bring in all their own stuff. We picked DiGiCo, because that was all we had been using, really, for every show,” says Batuyong, who regularly works on America’s Got Talent, X-Factor and numerous other TV shows and live events.

Batuyong and his team, which includes FOH mixer Josh Manville and monitor mixer Matt Russell, knew that they wanted a compact SD12 at the front-of-house position in the theater, which has a capacity of around 500 standing plus another 150 to 200 on the mezzanine. “Having an SD12 at front-of-house saves us so much space because it’s so small, yet it still has all the functionality. And that made everybody happy, because everyone that normally congregates at front-of-house suddenly had more room,” he says. 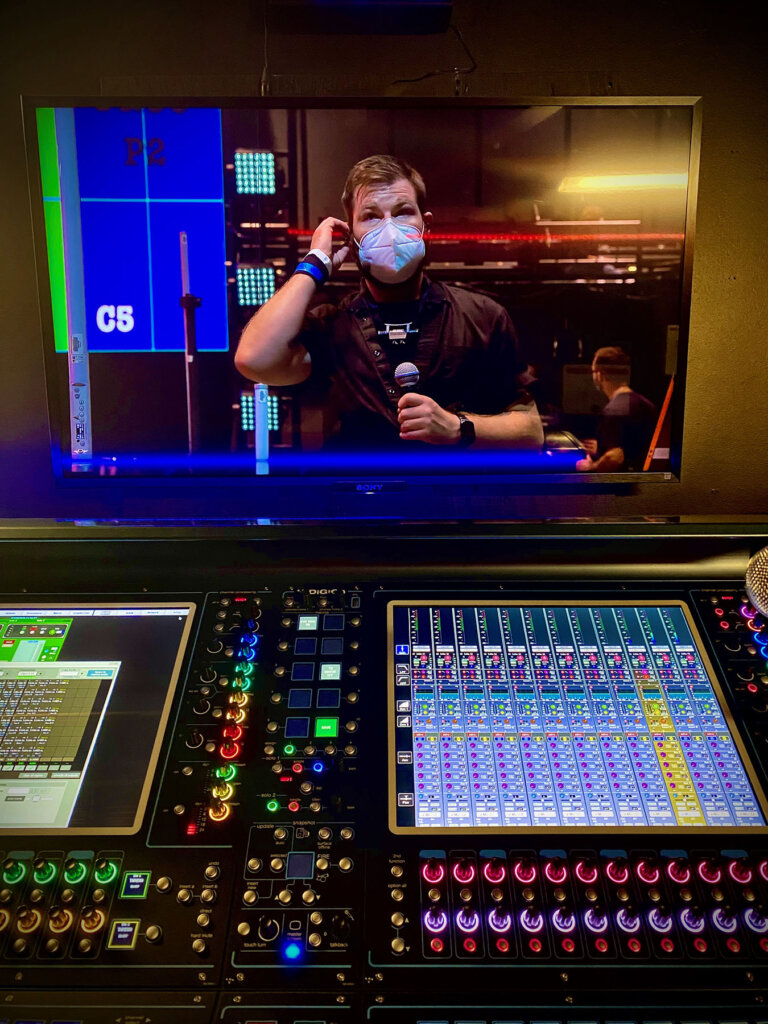 Monitor engineer Matt Russell on the iHeartRadio Theater stage, seen on the display over the DiGiCo Quantum338 monitor console

When he contacted Matt Larson, vice president of professional audio for DiGiCo’s US distributor, Group One Ltd, in late 2019 to see what options might be available for the monitor desk, “Matt said, ‘Don’t buy yet; wait until the NAMM Show. I can’t tell you what’s coming, but you’re going to want it.’ I said, ‘Sign me up; I trust you.’ We didn’t know it was going to be Quantum, although we hoped.”

But then, says Batuyong, “We found out that it was a whole new Quantum machine. It was everything we’d hoped for and more—way more.” The venue’s new Quantum338, which is based on seventh-generation FPGAs and an entirely new system architecture, is fitted with 112 inputs and 48 outputs, all incorporating DiGiCo’s new “Ultimate Stadius” 32-bit ADC and DAC conversion, plus DMI-AES cards supporting 16 AES I/O.

Two SD-Racks are connected optically, he also reports. “We run everything on a loop and share the head amps, one mixer using the gains and setting them, and then everybody using trims beyond that. No one is using gain tracking. We found that that works the best for us.”

The iHeartRadio Theater Los Angeles had been closed since the start of the coronavirus pandemic, so the festival marked the venue’s debut of its new Q338. “We shut down, like everyone else, in March. And we didn’t receive the Q338 until June,” says Batuyong. “We did use the SD12 on a few shows earlier in the year, but the tenth anniversary music festival was the maiden voyage for the Q338, and it was 100 percent amazing.”

He continues, “Everyone was extremely excited because, with quarantine, nobody had been able to see this console. Some artists’ FOH mixers were little bit worried about bringing their files and how the file converter was going to work, but all of that worked seamlessly and was absolutely great. But most people started the mix from scratch. That was easier for the shortened sets that they were going to play. And everyone said, on their next tour, they want a Q338.” 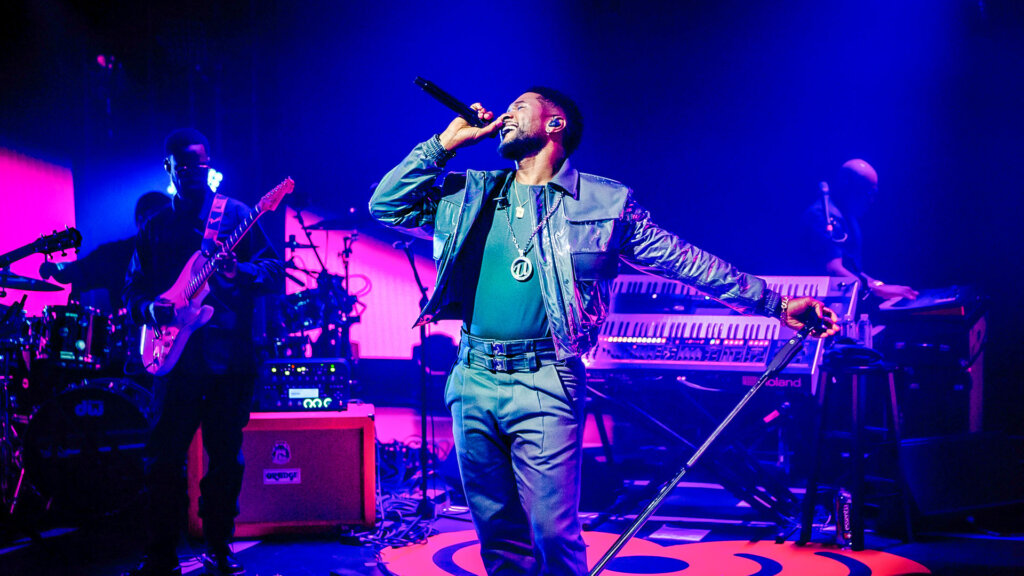 The weekend-long virtual festival, hosted by Ryan Seacrest, was broadcast on iHeartMedia stations nationwide September 18 and 19, and was also televised on The CW Network on September 27 and 28. The iHeartRadio Music Festival, which debuted ten years ago in celebration of the launch of the iHeartRadio digital service, was additionally available for streaming via the iHeartRadio app, iHeartMedia’s free all-in-one digital music, podcasting and live streaming radio service.

This year’s iHeartRadio Music Festival included performances not only from Los Angeles but also from the broadcaster’s theater in Nashville, as well as from Seoul, South Korea. “We had eight artists come through in seven days, including two on one day,” Batuyong says. For example, he says, “Miley Cyrus was the big showstopper,” headlining the second day of the festival. Enrique Santos, winner of the 2017 iHeartRadio Latin Personality of the Year Award, introduced Kane Brown onstage in Nashville for a performance of “Be Like That” alongside special guests Khalid and Swae Lee on the iHeartRadio Theater Los Angeles stage, a collaboration made possible via PORTL, a new hologram technology. “Alicia Keys came through, and Usher was also here,” he says.

A couple of artists did bring their own setups, Batuyong reports. “Which was fine, because we have a little room now,” he says, thanks to the space-saving compact SD12. “And everyone brought in DiGiCos.”

Golden Age Hollywood movie mogul Jack L. Warner called it “The Castle of Your Dreams.” The Warner Grand Theatre is…