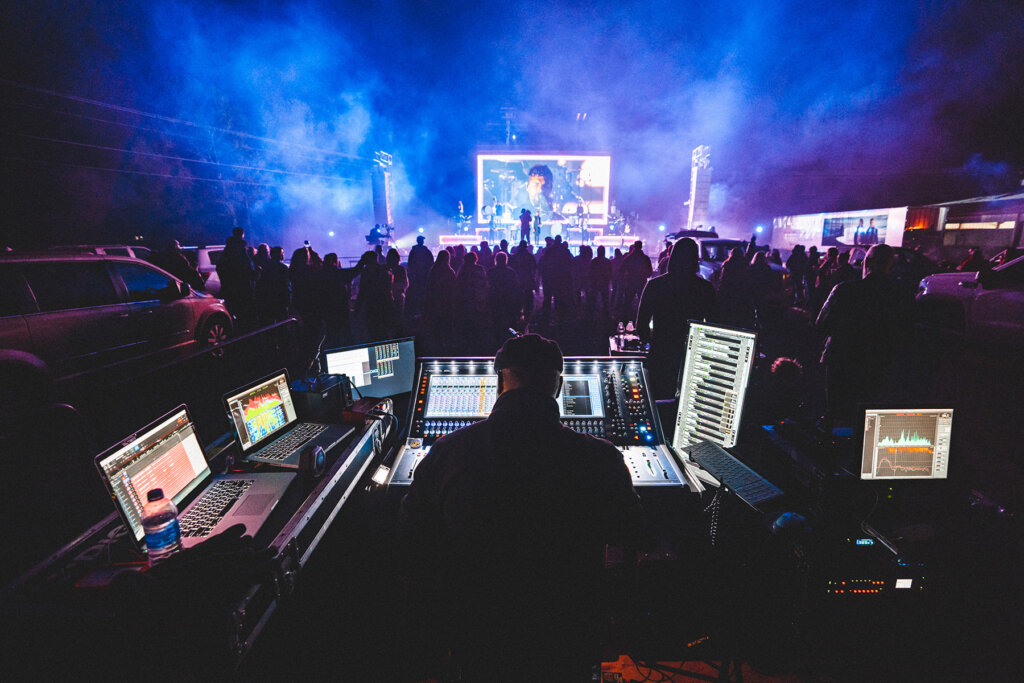 for KING & COUNTRY are currently out on the road with a pair of DiGiCo SD12 96 mixing consoles supplied by tour sound provider Blackhawk Audio (Credit for all photos: Mitchell Schleper)

Australian-born, Nashville-based sibling duo for KING & COUNTRY are currently out on the road with “A Drummer Boy Drive-In: The Christmas Tour” in support of their first holiday album, A Drummer Boy Christmas. Performing 20 concerts between November 12 and December 20, Joel and Luke Smallbone’s show is backed by six additional multi-instrumentalists on stage and the sound reinforcement gear and expertise of Blackhawk Audio, which is deploying a pair of DiGiCo SD12 96 consoles for FOH and monitors each night.

The Christmas tour directly chases up the four-time Grammy Award-winning duo’s successful “Together Again: A Drive-In Tour,” which ran from September 10 through October 30. Maintaining the same socially-distanced drive-in show format that has become “the norm” for 2020, the current largely outdoor tour is stopping at a variety of locations across the southern US, including arenas, fairgrounds, and drive-in movie theaters, as well as iconic sites like Pasadena’s Rose Bowl, Nashville’s Grand Ole Opry House, and Pensacola’s Five Flags Speedway. And like the tour leg before it, for KING & COUNTRY’s final trek for 2020 continues to carry the same DiGiCo consoles that FOH Engineer Ralph Rivera and Monitor Engineer Zach Escobar have been using all year. 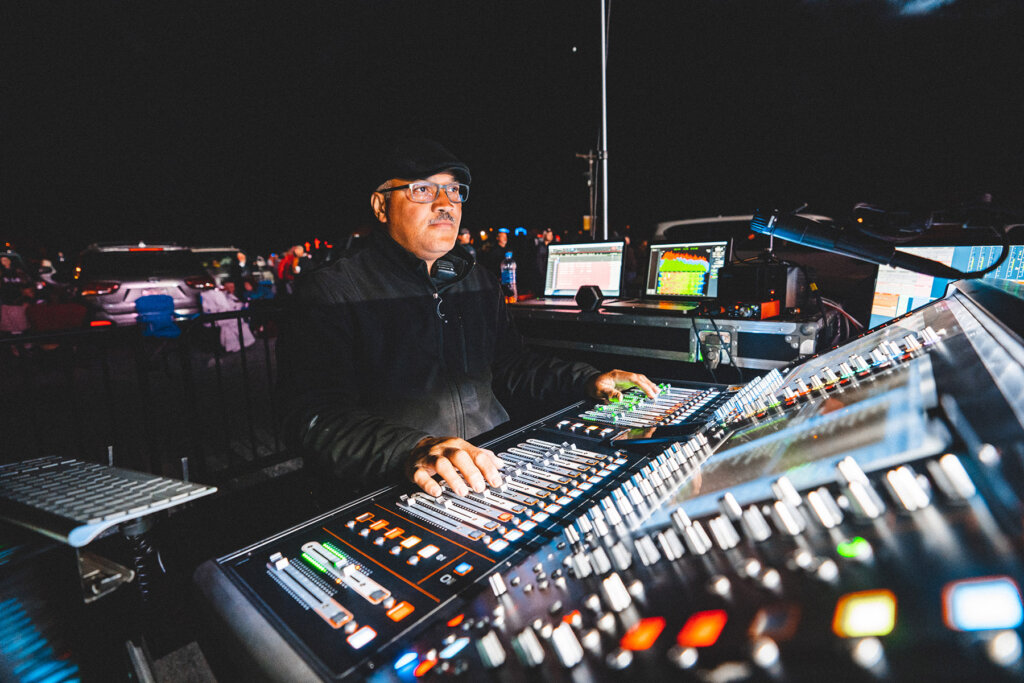 “Up until about four years ago, we were touring with another console brand, but then I finally got a taste of DiGiCo with an SD8 and I’ve never looked back,” says Rivera, who has been with for KING & COUNTRY for eight years but has also worked with the Smallbone family for 23 years, previously running FOH for Joel and Luke’s also-famous sister, Grammy Award-winning Rebecca St. James.

“Blackhawk Audio has been our touring partner for five years now, and we’ve been on their DiGiCo SD12s for FOH and monitors for the past three of those,” he continues. “It would be hard for me to say any one specific thing that I appreciate about the SD12 because I appreciate everything about it, including how flexible it is to use and how great it sounds, even before any plug-ins are added. It’s been a solid and reliable performer and keeps getting better, especially with the 96-input channel upgrade, which is helpful because we’re typically running 84 physical inputs between the stage, tracks, RF, and program feeds.” 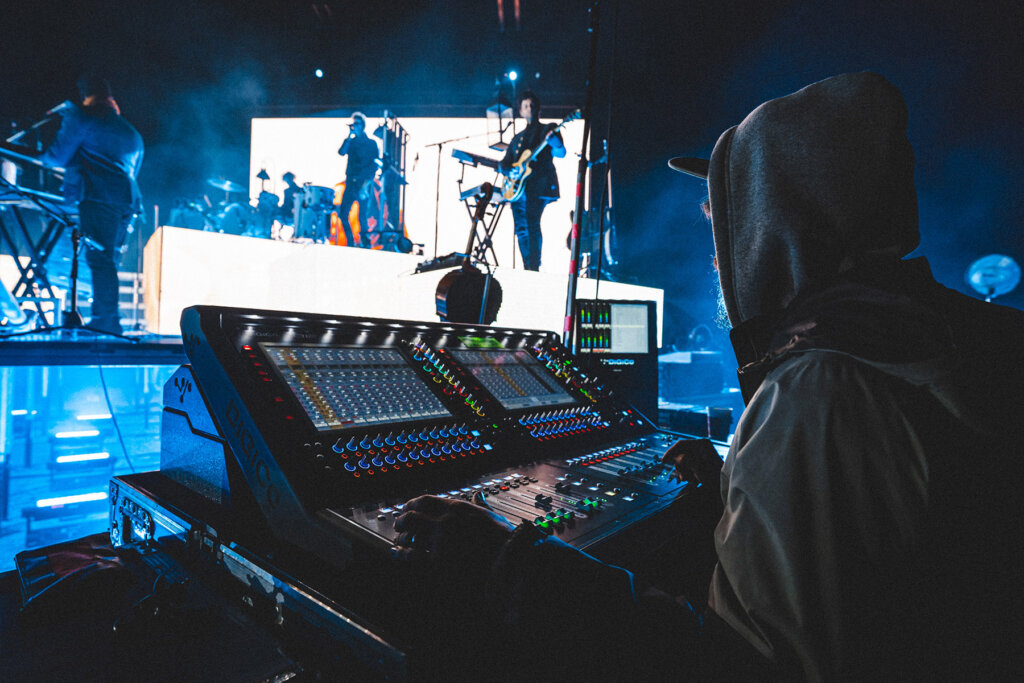 Connected via fiber, both the FOH and monitor consoles are paired with SD-Racks, each loaded with seven 32-bit “Ultimate Stadius” Mic Preamp modules, five 32-bit DAC modules, and two AES output cards. A DiGiGrid MGB interface at the house console allows Rivera to connect to his laptop for live multitrack recording of all the shows for virtual soundchecks using the Waves Tracks Live platform. Similarly, the SD12 96 monitor console also is equipped with a DMI-WAVES SoundGrid expansion card for multitrack recording when desired.

Although there are eight musicians on stage, the input count is higher than might be expected because nearly every band member is a multi-instrumentalist. “Everyone in the band pretty much plays every instrument, and four of them are also background vocalists,” describes Escobar, who has been with the group since January of this year. “Our guitar player will jump to the bass riser and play there for a few songs, then jump down to the synth station. Our drummer plays keytar for a song, and our bass player plays cello, mellophone, and marimba, so there’s a lot of moving around on stage. There’s also a trombone, a second drum kit, marching drums, and tube bells. 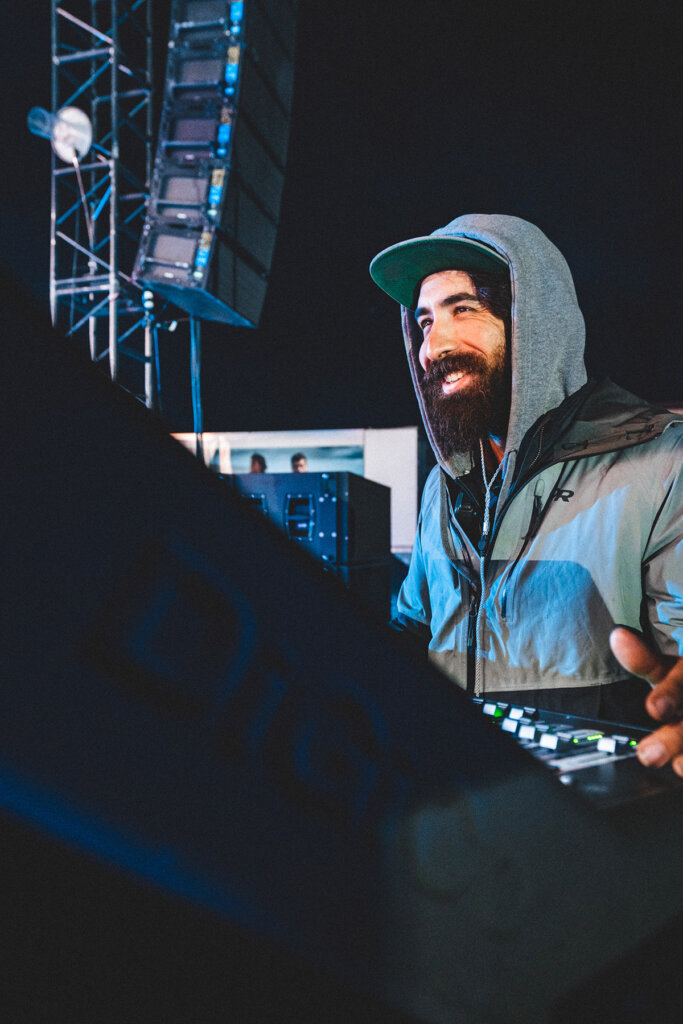 “Because there are so many inputs and I need all the faders accessible quickly, I use the Aux to Faders panel religiously instead of the physical solo buttons. That allows me to keep my bread-and-butter layers on the desk at all times. I also reach for EQ and dynamics rotaries pretty regularly as well as aux pan rotaries. Then I keep my crowd mics in a CG with that fader assigned to one of the masters, so I can easily ride audience mics between songs and at special moments. I’m really pleased with the setup and everything’s been working great.”

Escobar is generating a dozen stereo monitor mixes—eight for the performers, plus four more for backline, playback tech, spare/guest mix, and himself—all of which are being heard on JH Audio JH13V2 PROs. “Every mix for every member is different for every song, so the quicker I can get to a fader, the better,” he adds. “Because we’re a one-truck tour where ‘space is everything,’ the SD12 puts a decent fader count into a small form factor that is good for me and great for our truck pack.”

The DiGiCo consoles also get high praise for their pristine sonics. “I hear multiple comments every night about how good the show sounded and how appreciative people are to be able to hear everything so clearly, especially the vocals,” says Rivera. “I love the SD12’s onboard processing and use it on almost all of my channels and in conjunction with Waves plug-ins, which I use on vocals and drums to take the same sounds from the studio and vice versa.”

“Joel, Luke, and the whole band have also been pleased with the sound of the SD12,” shares Escobar. “They like that it doesn’t color or tonally change what they’re sending me. It’s a true representation of what they’re playing, which is really the ideal.”

Both engineers go on to thank Production Manager Matt Brewer, Stage Manager Ezra Salmine, Blackhawk System Tech Cody Wayne Scott, and Tour Manager Chico, among the rest of the crew. “These guys make the impossible happen—including building our own stage and PA towers every single day—and they allow Ralph and I to keep our minds on the mixes. This show couldn’t happen without them,” says Escobar. 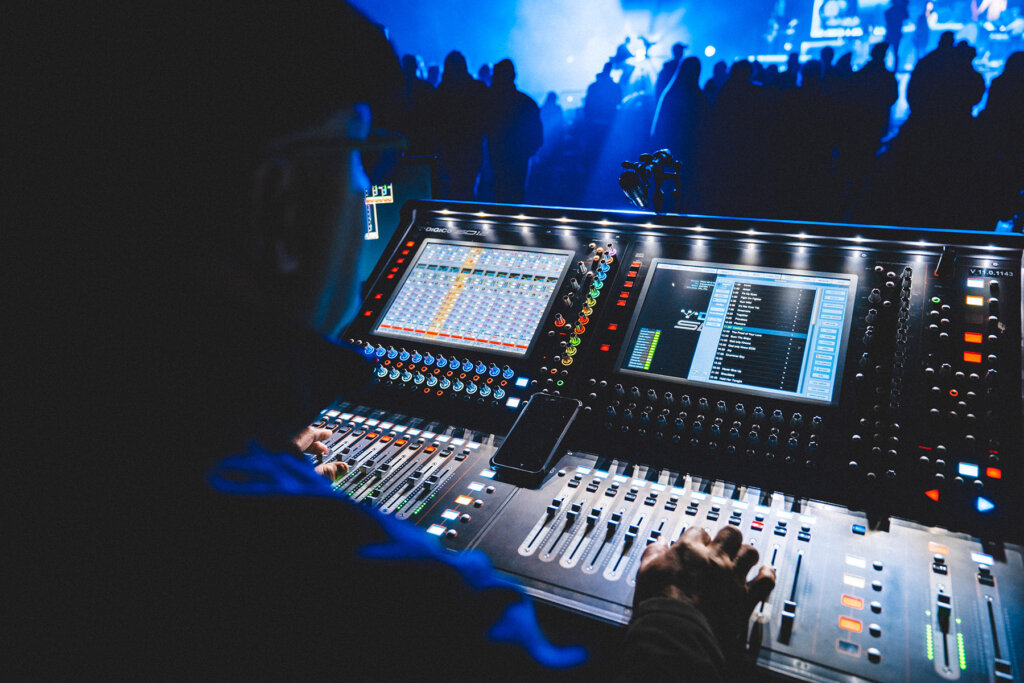 “Same goes for DiGiCo,” Rivera adds. “Ryan Shelton and Kyle McMahon at Group One Limited [DiGiCo’s US distributor] have always been there if I have any questions or emergency console needs. DiGiCo makes the world’s best mixing desks, and then backs them up with the best customer service and support to ensure that we’ll get through every show. That combination is priceless.”

For more information on for KING & COUNTRY, go to www.forkingandcountry.com. Blackhawk Audio can be found online at www.blackhawkaudio.com.

A pair of SD5 consoles handled front-of-house mixing for well-received performances by Jennifer Lopez and Shakira, while two Quantum 7…