Nearly 150 inputs were kept busy throughout the “Slow Down Summer” singer’s show, with the monitor desk’s Nodal Processing focused largely on making space for Rhett’s vocals, while the FOH console was able to move seamlessly from song to song, sculpting each one to perfectly fit every moment 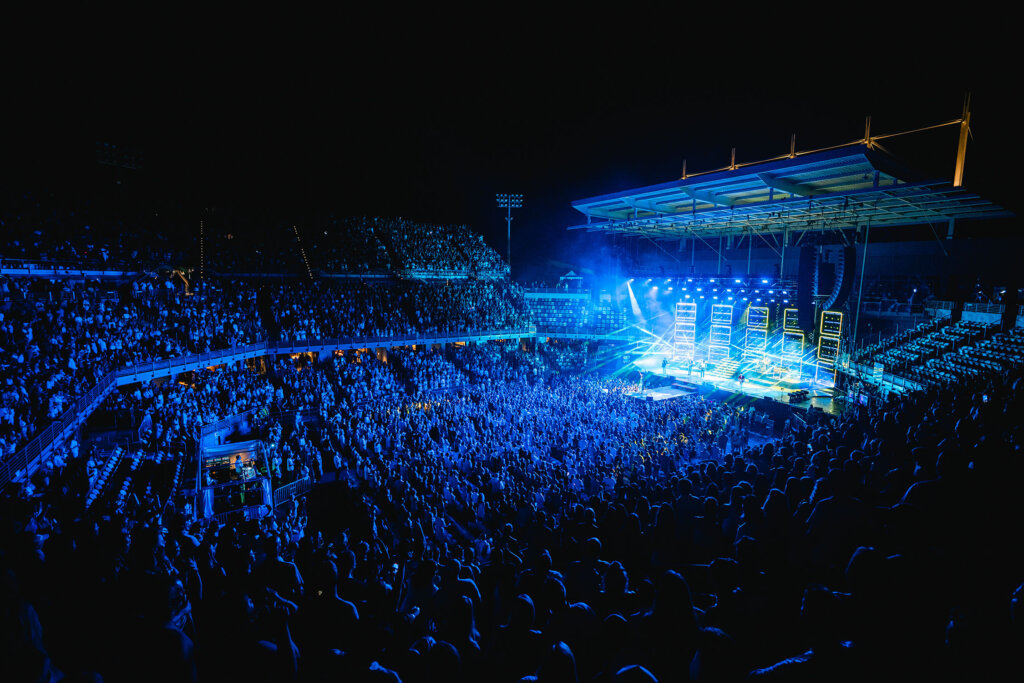 Look under the hood of Thomas Rhett’s just-concluded “Bring the Bar to You” Tour, a 30-date US trek that kept him and his band busy from June to mid-October, and you’d have seen a complex technical signal path and workflow worthy of any arena-level pop performance. In preparation for the trek, whose name came from a track on Rhett’s Where We Started album released earlier this year, FOH engineer Trey Smith and monitor engineer Jimmy Nicholson had plotted out much of the tour’s sonic complexity during a series of extensive rehearsals leading up to it. During these, while the band, musical director and Smith arranged keyboard and guitar-amplifier modeling patches, Nicholson perfected what Rhett himself would hear in his IEMs while allowing each performance to be both true to the recordings and fitted perfectly to each successive venue. The only way to accomplish that, according to the audio engineers, was via DiGiCo’s Quantum7 console—times two. Rented through Nashville-based Spectrum Sound, the identical control desks reportedly made all the difference in terms of being able to reliably execute a complicated show night after night. 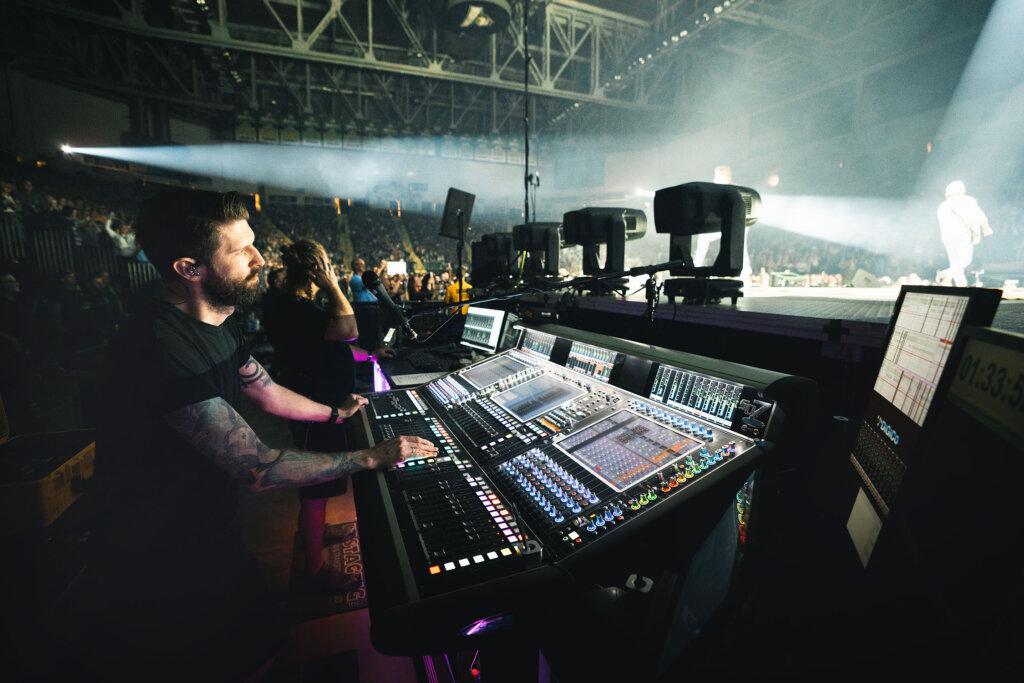 Jimmy Nicholson mixing monitors for Thomas Rhett on a Quantum7

The pairing of the two Quantum7 desks came about when Nicholson, who joined Rhett’s team in 2019, was asked to take over both the artist’s audio monitoring, which he had initially been doing, and the monitor mix for the entire band. Until then, show monitoring needs had been mixed on a pair of DiGiCo SD5 consoles. “Once I took over the entire monitor mix, I realized I’d need a lot more processing power to manage it,” he says. “That’s when we both made the switch to the Quantum7,” interjects Smith, adding an SD-Rack, two SD-MiNi Racks, and four Orange Boxes—one for keyboards and electronic drums, one for tracks, one for guitar modeling amps, and one for FOH outboard gear—all shared on an Optocore loop, to the list. Nicholson continues, “There’s a huge advantage to having identical consoles and having all of this compatible technology on the same network.” 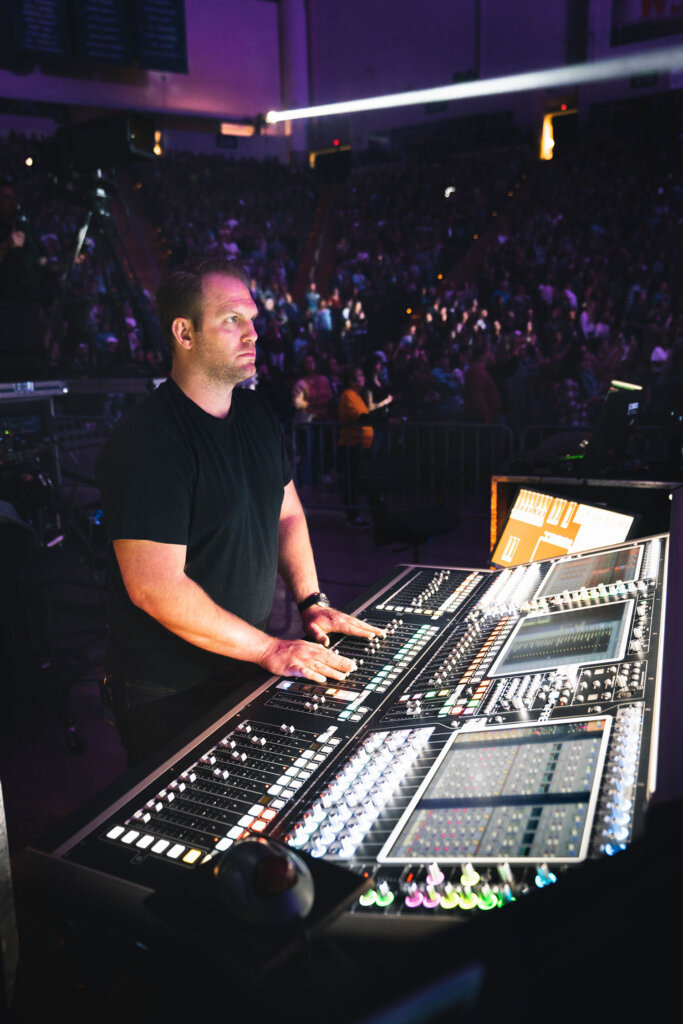 Nicholson estimated that he was applying as many as 85 distinct configurations of the Quantum7’s Nodal Processing feature just to Rhett’s IEMs, including various multiband compression and dynamic EQ settings. This extreme level of exactness allowed him to precisely fit other elements in the monitor mix around the vocalist’s mix, especially instruments that came near the vocal frequency ranges, such as keyboard, guitars, and backup singers.

“Nodal Processing allows me to apply this level of processing solely to TR’s mix” he says. “I’m able to carve out a space, in terms of both frequency spectrum and dynamics, for TR’s vocal without affecting the sounds everyone worked so hard to get during rehearsals in their own mixes.”

The console requirements for Smith, who has worked FOH for Rhett for four years, included DiGiCo’s flexible and powerful snapshot capabilities, as well as Quantum’s Mustard Processing. “With the front-of-house mix, I didn’t have the same reliance upon Nodal Processing as Jimmy needed, but I did rely heavily on other features that the Quantum7 offered,” he shares. “My goal in the mix is to bring the album to the live show. There was a lot of time dedicated to dialing in sounds with the band to recreate the sound of the record for our fans to experience in a live setting.”

To achieve this, Smith looked to the console’s Mustard EQ and compression processing, as well as the Spice Rack for dynamic EQ and multiband compression. “Jimmy was using his Quantum7 in a very targeted but powerful way for each individual musician on stage, while I was using my console’s features to allow for a customized mix for each song,” he says. “We both heavily lean on the Quantum7 to accomplish our tasks and what we are expected to deliver each night. The Quantum7s have every tool we need to make that happen.” 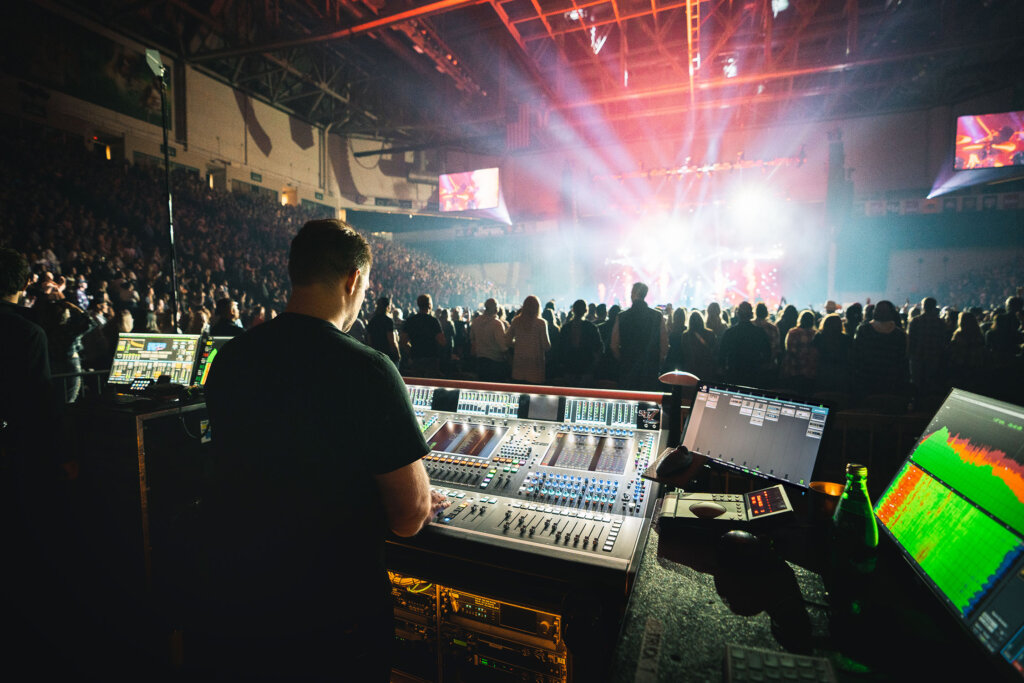 Spectrum Sound supplied the twin DiGiCo consoles for the tour

Tight timing at the tour’s start meant much of the audio had to be built on the fly, but the…