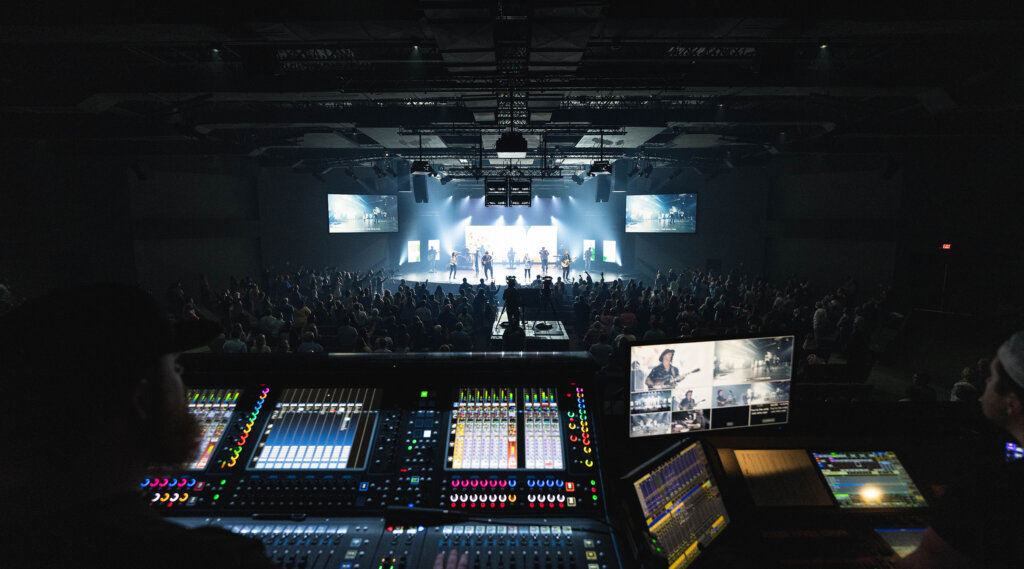 CityHope Church in Mobile, Alabama’s metro area has just made another leap forward with its summer installation of a new DiGiCo Quantum338 console at its flagship Malbis campus, just north of Daphne. It’s the centerpiece of a larger audio upgrade that also includes two integrated DMI-Dante cards, an Orange Box interface for MADI, integrated DMI-KLANG card for in-ear monitor mixing, SD-Rack fitted with 32-bit “Ultimate Stadius” mic preamps, SD-MiNi Rack used for broadcast audio-for-video I/O (including video switcher, computers, and lobby audio-processor feeds), and DiGiGrid rackmount Quad MADI interface that allows recording of up to 128 channels at 96 kHz. The Q338 console, SD-Racks and KLANG audio are all on a newly-installed Optocore loop network.

The installation of the new DiGiCo Q338 console represents an inflection point for the church’s audio infrastructure, literally replacing three existing consoles with the single Q338 desk. “The consoles they had at front of house, monitor world, and broadcast were showing their age and lack of support, but putting in the DiGiCo Quantum console was more than just an upgrade—it represented an order-of-magnitude improvement,” says ESB Group Solutions Architect/Design Engineer Drew Breland. “For starters, it’s completely eliminated two entire consoles, at monitors and broadcast. The Quantum console at FOH and the KLANG card take care of all of the sound in the house, from the PA to the in-ear monitors on stage,” where, he adds, the church’s usual complement of five vocalists, two electric guitarists, acoustic guitarist, electric bassist, keyboardist, and drummer have taken quickly and completely to KLANG’s immersive mixing. 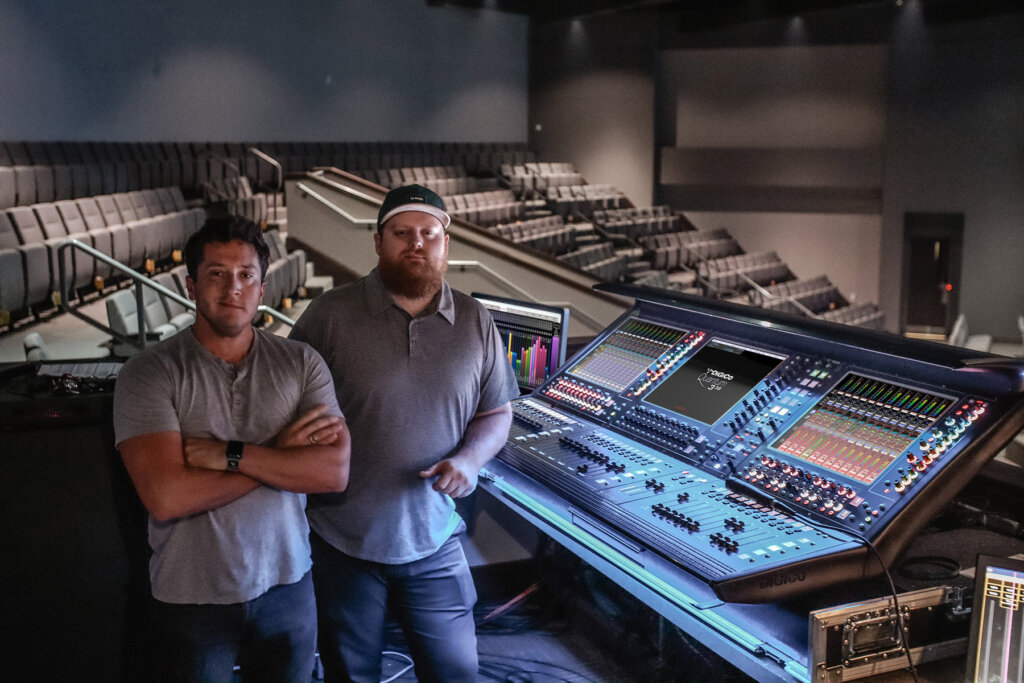 And the same can be said for the church’s live sound engineers, who have embraced the Quantum’s powerful Mustard and Spice Rack processing. “CityHope Production Director Adam White comes from the recording studio world he worked in before, and he was planning on running external plug-ins on the console,” says Breland. “But once he started hearing what he could accomplish with the Quantum processing, he knew he’d found his console.”

White confirmed that scenario. “Coming from a studio background, for me, the mix is always first about creativity, and I was amazed at what I could find once we got into Mustard and the Spice Rack,” he says. “The processing immediately felt familiar. I was able to get the same results I was used to working on ProTools and a DAW, without having to use third-party plug-ins.”

He says he appreciated the fact that he was able to train his associate FOH engineer on the Q338 quickly and effectively, allowing him to keep abreast of his other responsibilities at the church. “He was able to jump on the console on day one,” he recalls.

White also brought up the economics of the shift to the Quantum console, noting how being able to now manage FOH, monitors, and broadcast from a single work surface has saved money and time while improving workflow. “The routing and assignment flexibility of the Quantum is pretty incredible,” he says. “I can create one mix for the house, then use the buss structure to create completely separate mixes for streaming and for areas like cry rooms and overflow space in the lobby so that each use is perfectly tailored for what that use needs—and for a fraction of what it would have cost to buy three consoles to cover all of that.” 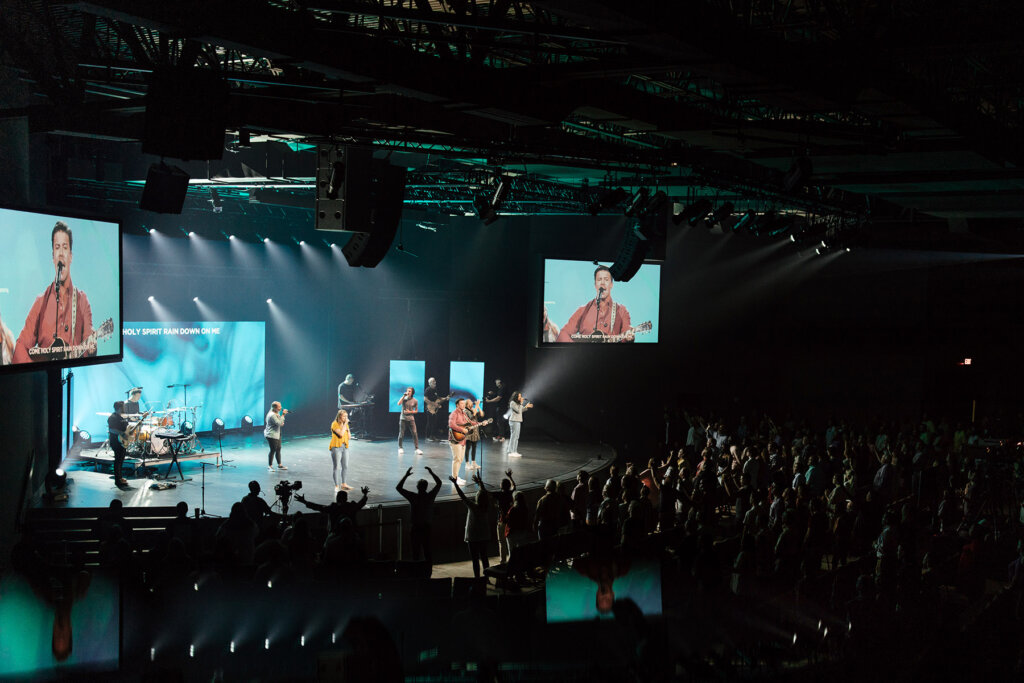 Adam White says that CityHope’s musicians were “blown away during the first soundcheck with KLANG; they said it was like hearing music for the first time.”

The shift to the KLANG system for stage monitoring was its own inflection point as well. “KLANG has been a game-changer,” he says. “Before, we had a monitor console, but no dedicated monitor mixer, so the musicians would have to walk up to the monitor console to adjust volumes, and that was all they could really adjust. Now, with the DMI-KLANG card, I can send the band a fully processed mix that they can have individual control over onstage.”

Just as the mix crew was able to dive right in on the Quantum console, White says the musicians warmed to KLANG’s immersive capabilities immediately. “They were blown away during the first soundcheck with KLANG,” he says. “They said it was like hearing music for the first time.”

The addition of the SD-Rack’s 32-bit “Ultimate Stadius” mic preamps has made a noticeable difference in the worship center’s sound quality. “We didn’t touch the PA system at all; the transparency of the 32-bit mic pre’s really made it come alive even more,” says Breland. “They played back tracks recorded in the worship center and they’re literally hearing the PA system in a different way. And the AES cards in the SD-Rack allow us to stay digital directly to the PA system amplifiers, so the signal path is cleaner and more direct. It all contributes to make the overall sound in the room better.”

At the same time, two 64-input DMI-Dante cards feed 128 channels to the ProTools system in the church’s recording studio, while a DiGiGrid Rackmount Quad MADI interface provides 128 channels at 96 kHz for redundant recording and virtual soundchecks, further streamlining the church’s music performances. “In fact, the virtual soundcheck capability turned out to be even more important that we’d expected,” he says. “They were able to take previously recorded tracks and use them to set up the routing and preliminary EQ for the new console during the one rehearsal they had before the first Sunday church service.”

At CityHope Church, the new audio upgrade was paying dividends from day one. “And that would be a win for any church,” Breland adds.

For more information on CityHope Church, visit www.cityhope.cc. The ESB Group can be found online at www.esbgroup.net.