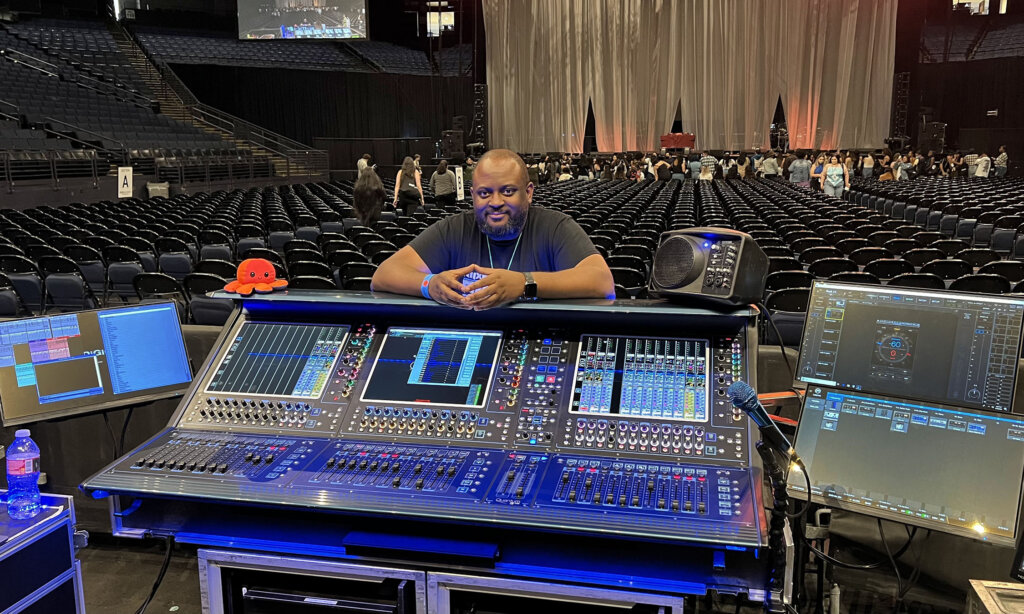 Recently completing a 28-date North American run, plus two more shows in South Africa, Kehlani is now on the cusp of carrying their Blue Water Road Trip over to Europe and the United Kingdom for 15 more stops in November and December. Joining the artist and their band for the ride have been a pair of DiGiCo Quantum338 consoles, which are being supplied by Eighth Day Sound/Clair Global and manned by FOH engineer Moshe Davenport and monitor engineer Caleb James, both longtime fans of the DiGiCo mixing platform.

“Although I’ve mixed on just about every desk that DiGiCo makes, the Quantum338 has very quickly become my new ‘go-to’ console,” says Davenport, who has worked for Kehlani for four years, and also currently serves as the artist’s tour manager and production manager. “My first introduction to the 338 was on Lucky Daye’s Candydrip Tour back in March and April, and then I used it in South America at Lollapalooza Brazil. It sounded so good; I knew that had to have it for Kehlani’s tour.” 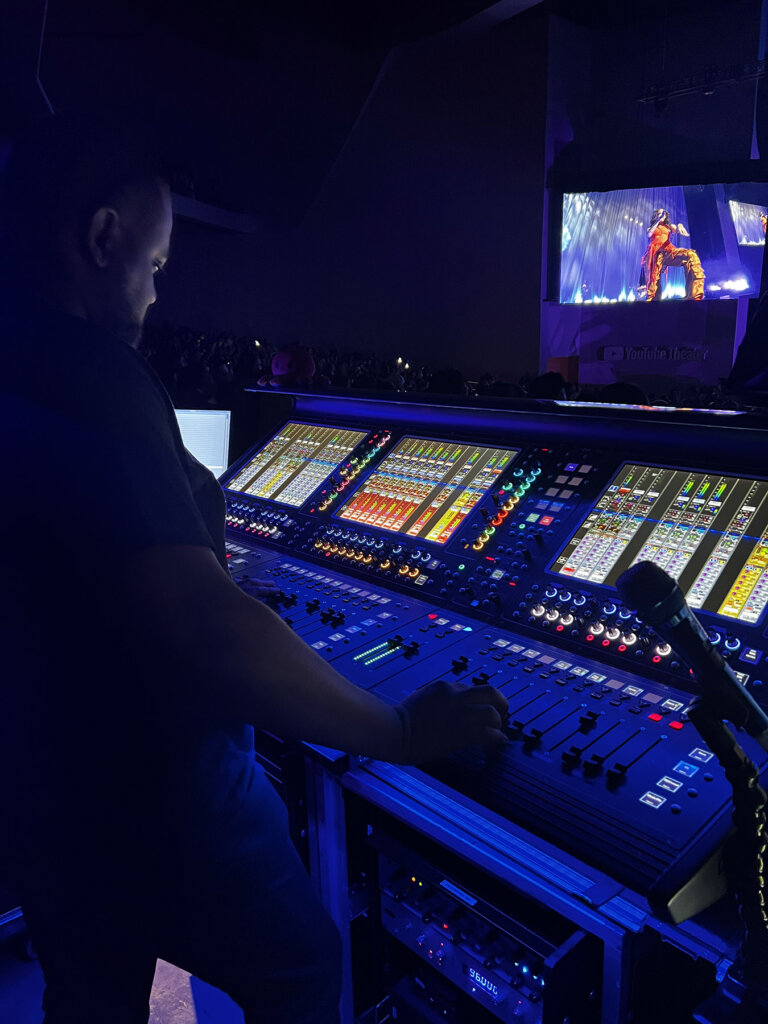 “DiGiCo really listened to engineers and did their homework when they designed the Quantum338,” he continues. “True to DiGiCo form, the setup and workflow of this console is so comfortable, but there are also many improvements. I love the Mustard Processing and Spice Rack, and mixing on the console is so smooth—the fader response and touchscreens are great. The sound quality and ease-of-use are both phenomenal as well and it’s been such a pleasure to work on for this tour.”

Davenport notes that he receives 72 inputs from the stage and ultimately works with a grand total of 115 channels, multitracking every show via a DiGiGrid MGB interface. The two Quantum338 consoles communicate via an Optocore fiberoptic loop, which is also shared by a DiGiCo SD-Rack and SD-MiNi Rack, both loaded with 32-bit cards, and an Orange Box equipped with DMI-OPTO and DMI-DANTE64@96 cards, the latter being used to interface the tour’s playback rig.

For monitors, James’ initial experience on the Quantum338 also traces back to March. “My very first show with Kehlani was in São Paulo, and the 338 was the console that was provided,” he recalls. “Thankfully, being familiar with the SD-Range of consoles, the Quantum platform was intuitive and easy to hop on. I was immediately impressed with the look and layout of the new console, and once I dove into the capabilities of the 338, I realized that it performed just as great as it looked. With its new Quantum features, it’s a true powerhouse and improvement on the already-amazing DiGiCo platform that I’ve grown to love.”

He singles out the Quantum338’s Nodal Processing as being his favorite feature so far. “This is especially useful in monitor world and speeds up my workflow substantially,” he says. “It allows me to free up critical channel processing where, previously, I’d double-route to process channels differently for ear mixes versus monitors, subs and fills onstage. The fact that I can process channels differently per aux send is amazing, allowing me to tailor each mix to my artist and band onstage to give them exactly what they need.” 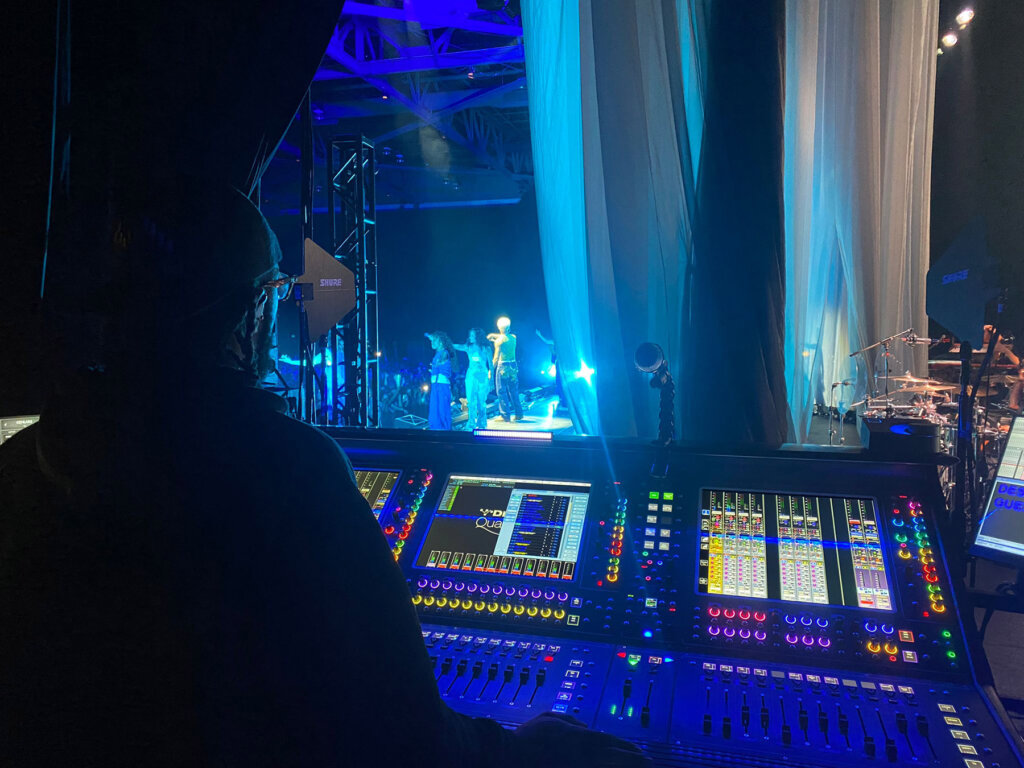 Caleb James mixing monitors for Kehlani on a Quantum338 console

James is also a big fan of the new console’s three 17-inch, 1000-nit touchscreens. “The 338’s screens are so vibrant and responsive and accurate to touch points—it’s such an enjoyable experience to mix on this desk. DiGiCo keeps on making my job as an engineer easier by the day with their new innovations, and keeps my job fun to support anyone when I’m behind one of their consoles.”

Tight timing at the tour’s start meant much of the audio had to be built on the fly, but the…

Nearly 150 inputs were kept busy throughout the “Slow Down Summer” singer’s show, with the monitor desk’s Nodal Processing focused…