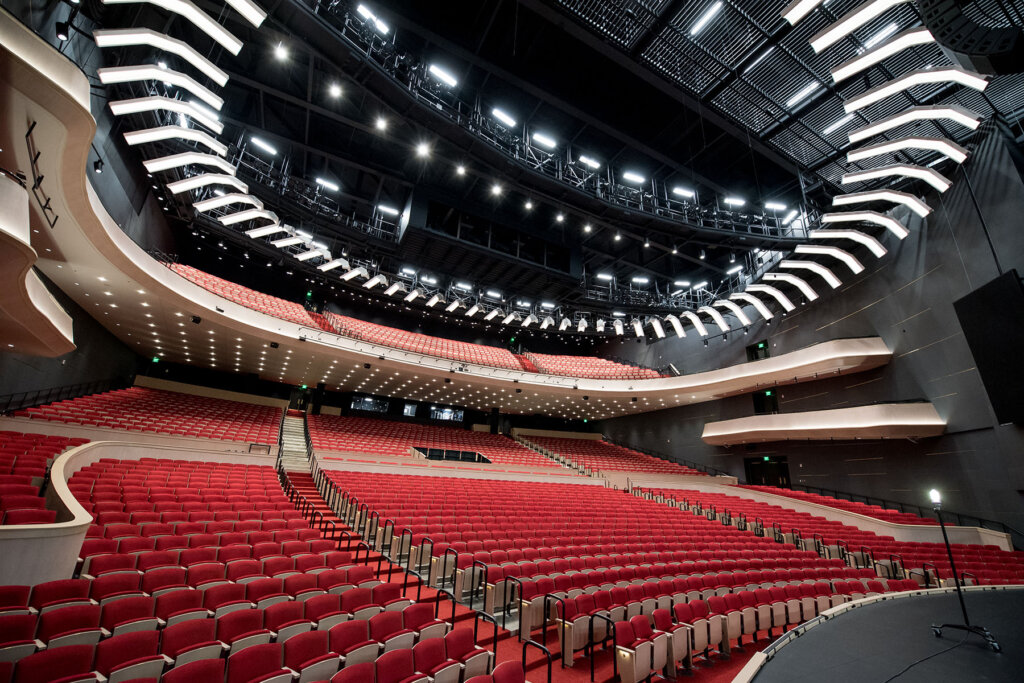 When the Steven Tanger Center for the Performing Arts in downtown Greensboro, North Carolina opens for regular performances later this year, the $91 million, 3,023-seat performing arts facility will give a city with more than its share of arts and culture a new crown jewel. Named for Steven Tanger, CEO of Tanger Factory Outlet Centers, who pledged $7.5 million toward the project, the new venue will host performances by the Greensboro Symphony and Guilford College’s Bryan Series of acclaimed lectures, as well as touring Broadway productions and concerts.

And it will do so with state-of-the-art sound from two DiGiCo SD12 consoles at front of house and monitors, an SD11 desk used for special events and that adds more flexibility to the venue, and a DiGiCo 4REA4 mixing engine that provides the drive for the main system while serving as a matrix mixer for outputs from multiple consoles. In addition, wall-mounted DiGiCo A164 16-input/4-output expander units act as smart input panels on stage. The DiGiCo systems were specified by SE Systems and Arup, and installed by integrator Parsons Technologies, now known as ArchKey Technologies. 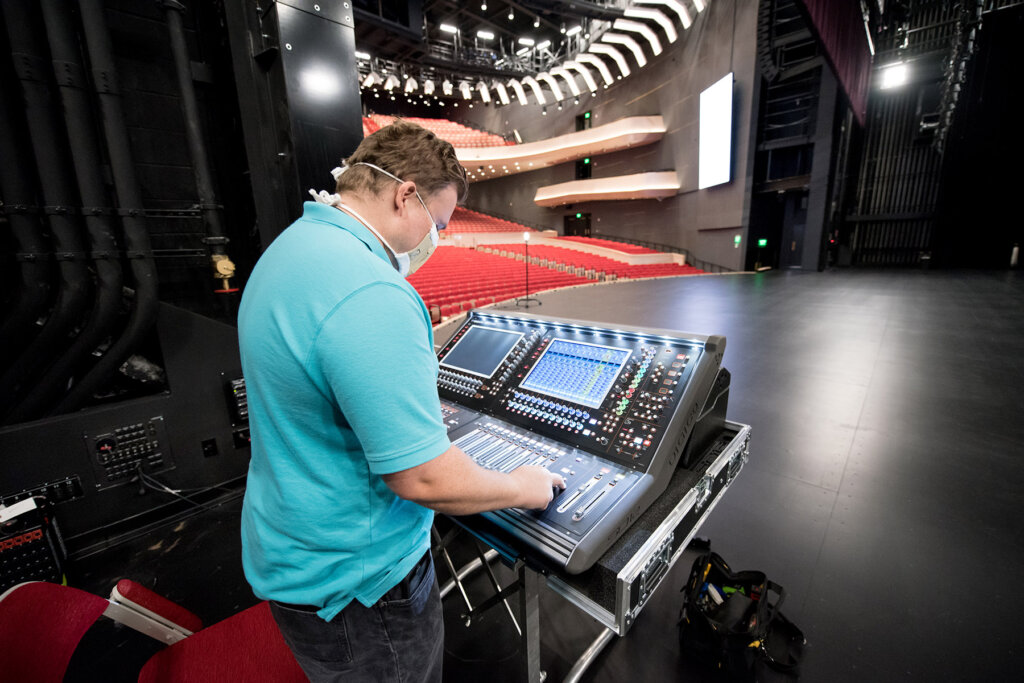 The FOH and monitor consoles are on an Optocore loop network, along with an SD-Rack with 32-bit mic pre’s for those desks and the SD11 mixer in the control room at the rear of the hall that can mix the venue’s sound when the space is used for events other than concerts or shows, allowing the FOH console to be removed and seats added. “The SD consoles are simply the best out there,” says SE Systems President Cliff Miller. “They’re reliable, they sound great, they’re incredibly flexible, and they’re on just about everyone’s contract riders, so they make the Tanger Center that much more attractive for touring music and shows.”

However, the SD desks are just part of a larger DiGiCo ecosystem at the Tanger Center. The 4REA4, DiGiCo’s centralized DSP engine capable of leveraging the power of FPGA technology at a 96-kHz sample rate, is the heart and hub of the Tanger Center’s sound systems, handling automated mixing of audio such as house announcements or any audio from the SD12 at FOH or the SD11 in the rear control room. The 4REA4 has bi-directional audio connectivity with any device on the network in both its proprietary format and a range of other standards, including Dante, Aviom, Waves SoundGrid, Optocore, ME-1 and more, and can also interface with external control devices using TCP/IP, GPIO, MIDI and AMX/Crestron. 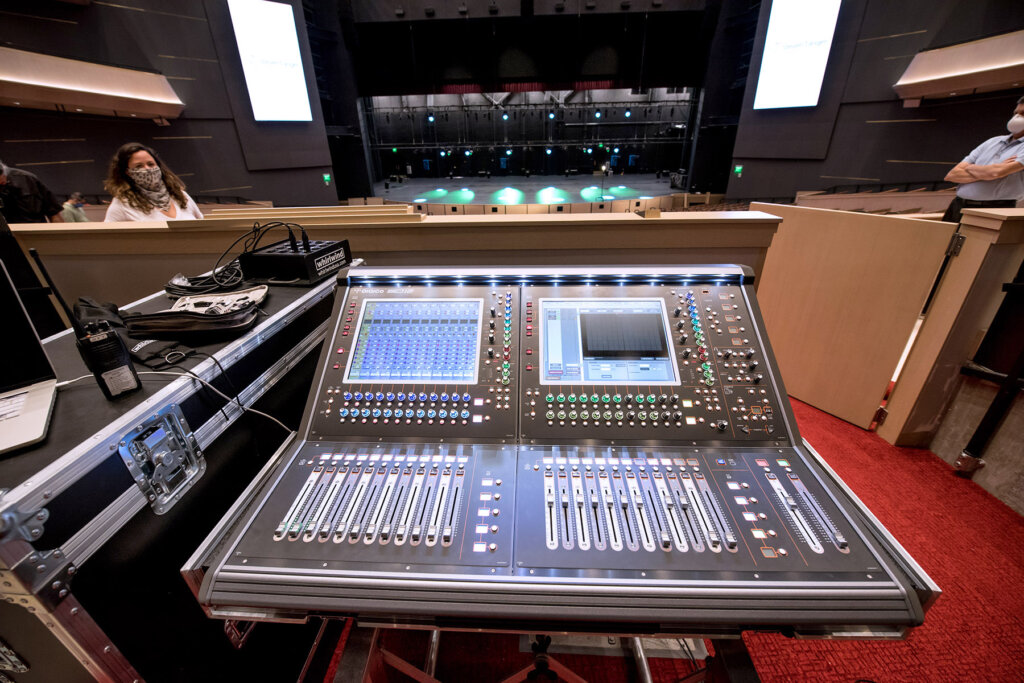 “There are so many variables in a venue like the Tanger Center, and the 4REA4 is the optimum solution for that,” says Miller. “We have a range of input sources, including analog, AES and MADI, and the 4REA4 handles them all. For instance, we can run AES at 96K right from the 4REA4 to the d&b audiotechnik amplifiers for the main PA system, and split to the QSC Q-SYS system for redundant analog inputs to the same amplifiers.”

With the introduction of the DiGiCo 4REA4 came the new DiGiCo A3232 protocol, allowing connection with DiGiCo A164 wall-mounted I/O expander units, via the DiGiCo ASTAR four-port A3232 network I/O expander, allowing up to 16 mic preamps per unit, with LED backlit Scribble Strips for each microphone input. “ASTAR has been a huge help here because of the distances from the stage and the 4REA4 to the amp racks on the catwalk above the stage,” Miller explains. 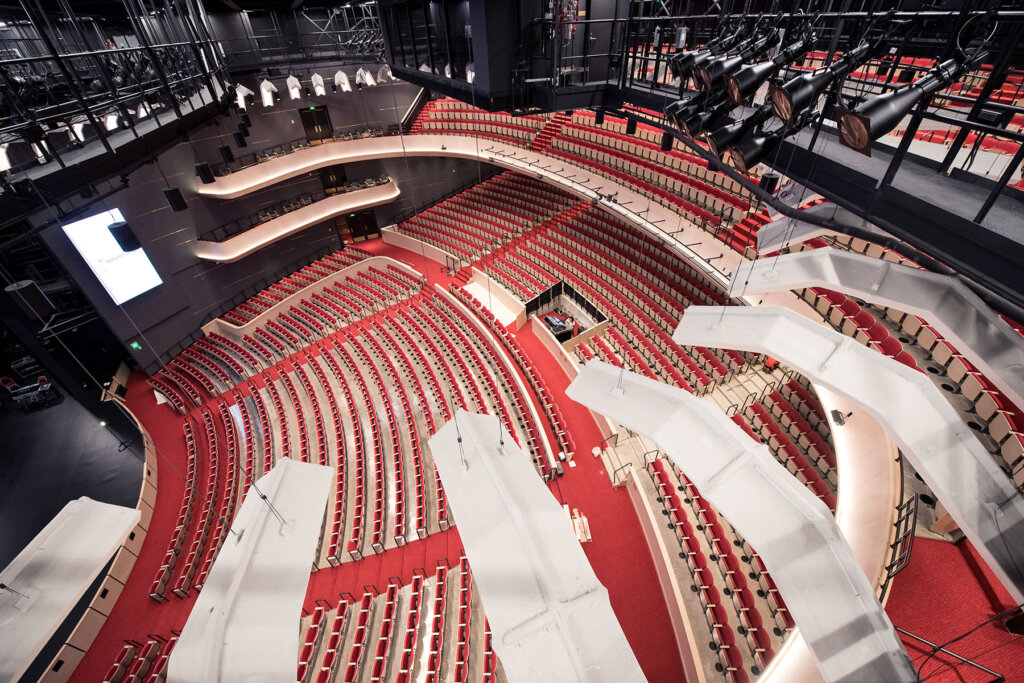 The new venue will host performances by the Greensboro Symphony and Guilford College’s Bryan Series of lectures, as well as touring Broadway and concert productions

And DiGiCo technical support was always available for designing, programming and commissioning this ecosystem, with Technical Sales Manager Taidus Vallandi on site for programming and advice. “This was a group effort between SE Systems and DiGiCo, and it turned out spectacularly,” says Miller. “We wanted to give the Tanger Center and the city of Greensboro the best venue sound possible, and we did.”

Visit the Steven Tanger Center for the Performing Arts at www.tangercenter.com. ArchKey Technologies, Arup, and SE Systems can also be found online at www.archkey.com, www.arup.com, and www.sesystems.com, respectively.

AES 2022 sees DiGiCo reveal the latest in its range of theatre-targeted Quantum consoles, the all-new Quantum338T. With “in the…

Wicked, winner of multiple Tony, Drama Desk and Grammy Awards, has become a Broadway staple, poised to celebrate its 17th…