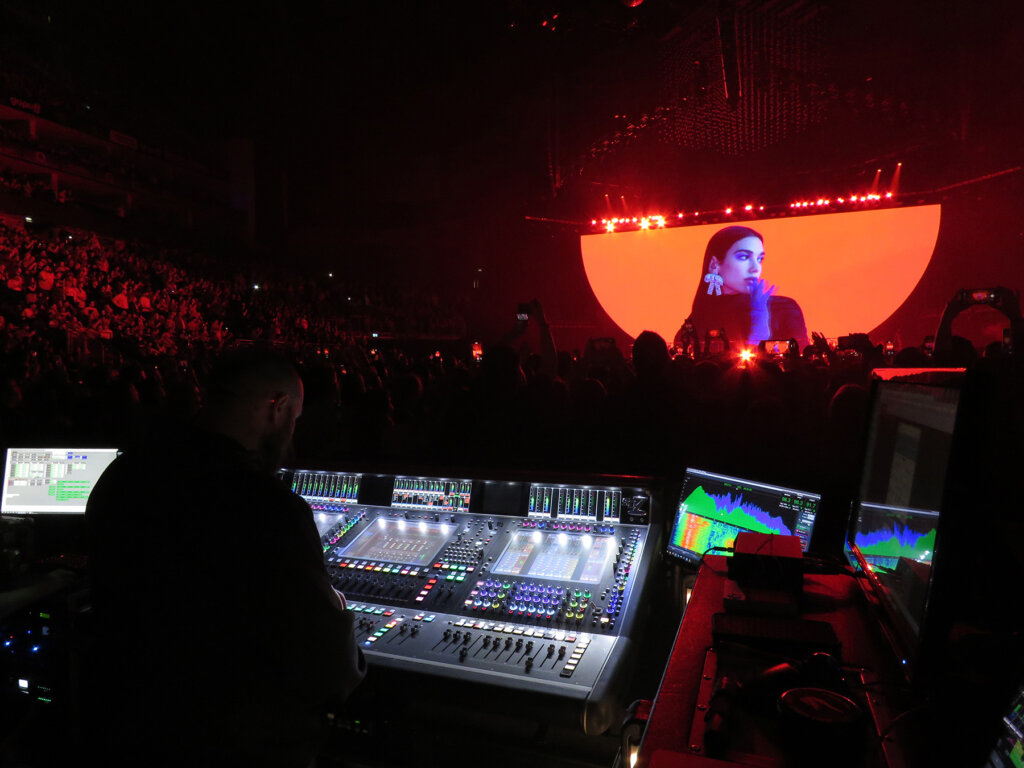 Future Nostalgia was originally scheduled to start in late 2019 but, like so many others, was repeatedly postponed until finally heading out in February 2022. It will finish in Perth, Australia in November, having visited North America, Europe, Latin America and Oceania.

Both the FOH sound and onstage mixes are being created on DiGiCo Quantum digital mixing systems, by Will Nicholson and Alex Cerutti respectively. Nicholson is in his seventh year with Dua Lipa and specified a Quantum7 console for this tour.

“The Q7 offers so much. It’s the only desk currently on the market with a dual brain, which negates the need for us to carry a spare board but gives us redundancy. That is very comforting,” he says. 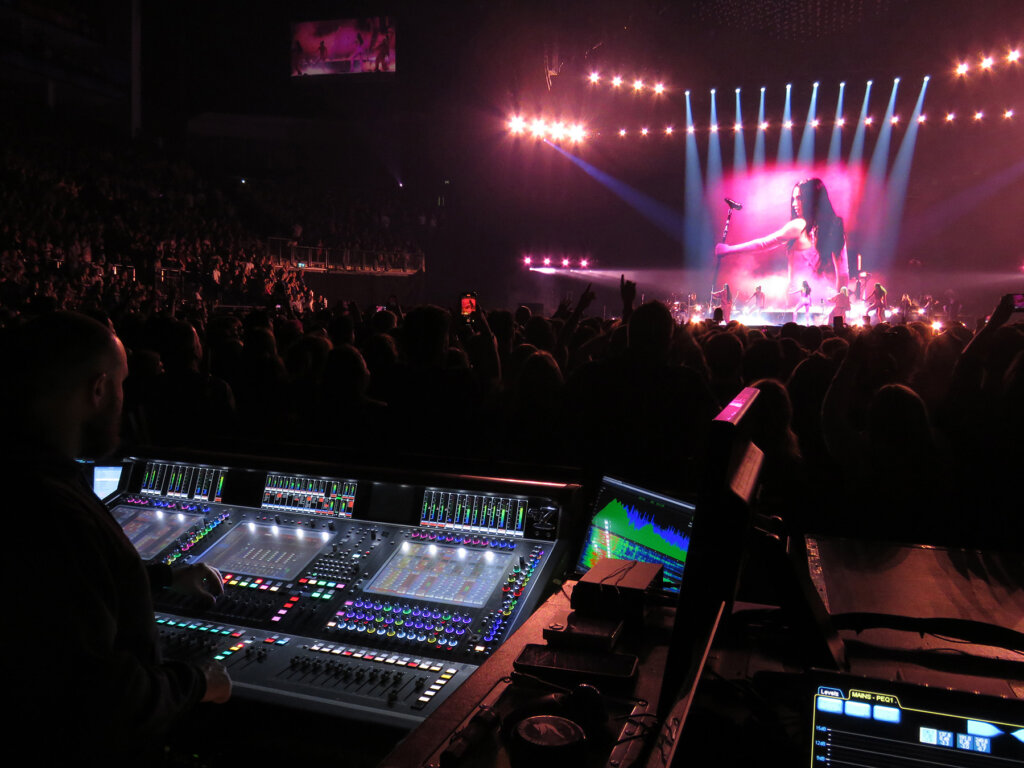 “It is also the flagship console for a popular brand, and we are on a world tour, so having global support is very important. Although we might think about power in terms of I/O or FX engines or similar, for me, one of the greatest strengths of the Q7 is its endless configurability and potential. It gives us the opportunity to approach shows and mixes in ways unique to each show and artist, and tailor our approach to the show content. Fundamentally, the Q7 won’t impart anything to your mix unless you ask it – color, glue, warmth, shine, whatever you want to call it. But, if you do want something, the Q7 might just have what you need – so, the power lies in the potential for making your mix reflect the artist’s ambition.

Nicholson is currently running around 60 music/band inputs at FOH, so with returns and audience mics the total input count is close to 100. Outputs are just L/R but, he reveals, he is a heavy user of bussing. “I have some plugins and outboard, distributed through an SD-Rack, a DD2FR and some local I/O,” he says. “I make use of the onboard FX for quite a few things, and I absolutely love the Spice Rack and Mustard Processing. I also record from the MADI splits as the virtual soundcheck capabilities are fundamental to my workflow.”

He continues, “The Spice Rack and Mustard Processing have taken a really honest, great sounding board and elevated it. Both of the Spice Rack components are true to function – you can insert one of the racks into a buss, set your thresholds and attack and get to work in ways that you will likely be familiar with. There’s not too steep a learning curve, no servers, no external laptop or patching – just load up a rack and mix. The Mustard Processor is just ace – color and dirt if you want it – very musical and straightforward to use. All the new modeled compressors are a pleasure to work on and have made my life so much easier, especially when considering automation. The Quantum machine has allowed me to streamline my approach, lose plugins, and retain the fundamentals of mixing. It’s a very welcome upgrade.” 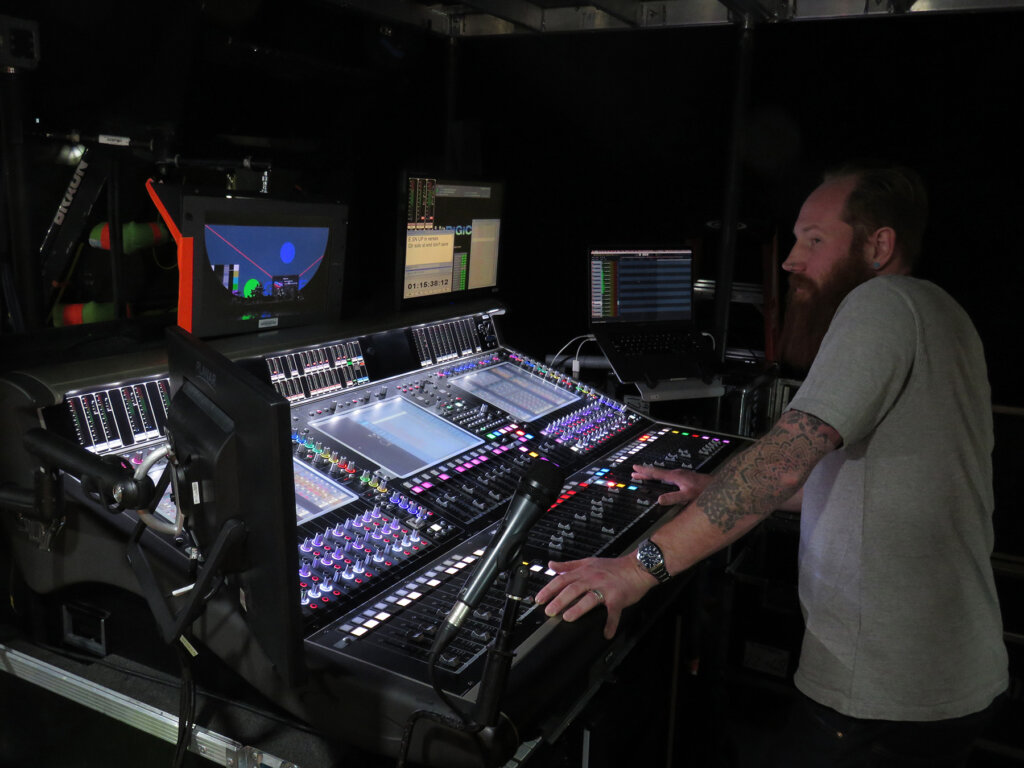 Meanwhile, at the other end of the multicore, Alex Cerutti is also piloting a Q7 in a very different way but with equal enjoyment: “I’ve worked with Dua since 2016 and for this tour I asked for either a Q5 or a Q7. When the Q338 came out I wanted to try that, but after counting up inputs and outputs, etc., I needed I few more busses than the Q338 could provide.”

Cerutti’s Q7 handles 130 input channels, 59 aux channels, 20 groups and 10 matrix outputs, then he uses the configurability of the control surface to give him access to everything exactly how he likes it. “My input channels are on the banks on the left, my Auxes, Matrix and Groups on the right with a ‘mix’ layer on the top, with Dua’s vocal and reverb, plus instrument reverb returns,” he explains. “On the center two fader banks I have Dua’s Groups and DCAs on the bottom and Aux mixes on the top bank.”

He is also a big fan of the DiGiCo’s Macro Buttons – “They’re a life saver, a couple of my favorites are Macros that send IEM mixes to a spare IEM transmitter. Another is one that swaps my main and spare vocal channels, as I have multiple versions of our main vocal, all doing different things and going to different people. So, without the Macros, it would take far too long to swap each channel.”

The road is hard on equipment of all kinds, but Cerutti and Nicholson’s DiGiCo consoles have taken everything in their stride: “We have had our consoles out in both the US and Europe on over 60 shows so far, inside and out,” adds Cerutti. “They have been faultless throughout. We have an excellent relationship with DiGiCo; whilst we haven’t had any issues, they’ve always come back really quickly with my questions on how best do to things. As per usual, our experience of using DiGiCo’s consoles has been great. The support from both them and Britannia Row Productions has been fantastic.”

Nicholson has the final word: “The Q7 has been absolutely solid, no complaints. My biggest enemy is confetti, so I keep a leaf blower handy!”